"From This Moment On" by Shania Twain is the song that comes to mind when I think of today's featured love story.

It's the story of a lovely lady who fell in love with a man who broke her heart. But that's not where the story ends. After going through a painful divorce and feeling like she hit rock bottom, God surprised Erica.

Yes, the Almighty God is full of surprises! :) The Bible says He wants to give good gifts to His children (Matthew 7:11). God believes in you and He's got the best in store for your life! *Jeremiah 29:11*

So what exactly happened to Erica after her divorce? How did she survive heartbreak? And what kind of surprise did God bring into Erica's life?

Read on to discover the answers to ALL your questions and more! :)

Like any girl I believed in fairy tales and true love. I married thinking that everything would work itself out so long as we were both committed and in love. My world was crushed however after I soon found myself in divorce court. I couldn’t believe I had become part of the 50 percent statistic that I had sworn to never be a part of. Heartbroken and completely mystified, I decided that maybe I needed to work on myself first before I gave love another chance. I explored new hobbies and routines, but mostly worked on my relationship with God. My mother claims that God was sick of hearing me cry and sob that he finally said: “Okay enough already! I have something lined up for you.” That’s kind of what happened actually. One lonely afternoon as I was sitting by myself in the home my ex and I had built up together, my roommate asked for me to come meet someone.

He wasn’t in her room or anything; in fact he wasn’t even on the phone. She showed me his Facebook page and asked: “Would you mind if he came to visit us during Thanksgiving?” There he was, this adorable Marine Corp pilot all suited up and dashingly handsome. My goodness I thought “I’m in trouble.” David was a childhood friend of my roommates; they had gone to academy and the same church growing up. Their families were good friends too. He liked to come down to the southern tropics of Florida where we lived and visit my roommate from time to time. My roommate wanted to make sure we knew each other first before he made an official visit to our home. I figured since he was a good friend of hers, he could be my friend too. Besides it’s not like he would be interested in a train wreck like me—divorced, broke, and exhausted from life.

David didn’t care though, and I truly believe God had other plans. From the moment I started to talking to him, I knew he was different. I was of course skeptical because I remembered having those exact same butterflies when I had fallen in love before and it had resulted in total heart break. I introduced myself and told him that my roommate and I were happy to host him for Thanksgiving so long as he respected my house and my rules. Not only did he understand, he was comforting. He wanted to be my boyfriend right away, but I insisted on taking it slow and becoming friends first—he agreed, sort of. After hours and hours of telephone conversations, skype chats, and text messages David flew down and spent the holidays with us. He was everything and more. A true southern gentleman that swept me off my feet with his opening line of “Hello sweetness,” coated in a southern accent. I melted right away. Lord have mercy…I needed to stay strong.

It wasn’t easy but I managed. David was persistent and patient. He called me daily and even purchased me an iPad so that I could communicate easier with him. I was constantly showered with gifts and flowers from afar. He was finishing up instructor pilot training in Texas and I needed to fulfill my teaching contract in Florida. Long distance wasn’t easy, but we made it work. I think we both knew deep down this would end up in marriage, but I didn’t want to jump the gun. I wasn’t used to all this attention and was skeptical of his intentions and his legitimacy. Looking back I’m amazed he kept at me because I would constantly throw him lines like: “Why do you even like me? Don’t you realize I’m damaged goods? Stop calling me pretty, I have 10lbs to lose!?” Maybe it was his military training, but he persevered at winning my heart. A few months later with a custom made ring in his hand, he asked me: “Would you do me the honor of being Mrs. ***for the rest of your life?” Tears in my eyes I hugged him and said: “YES!”

As “Nicholas Sparks” as this story may sound, it really did happen. David not only won me over, he won over my family too. He met my parents; he conversed with them and asked how he could make me happy. When he asked my father for permission to ask for my hand, he agreed on the condition that we attend pre-marital counseling. Within 24 hours he had made an appointment with the base chaplain. When I met his family there was an instant connection. I was so nervous initially because I grew up in the suburbs of Portland, OR and here I was in the deep woods of South Carolina meeting my future family. That nervousness was quickly squashed as their true Christian character was revealed. I quickly realized that he had a wonderful family and his two loving parents had demonstrated to him day in and day out how to love.

This all took place when I least expected. I was in probably the lowest point of my life, and not even contemplating another relationship. I didn’t know it at the time, but my heart was getting ready for the love it deserved. God had a plan for both of us and we were both fortunate enough to benefit from it. Our wedding was nothing short of magical and one for the record books. 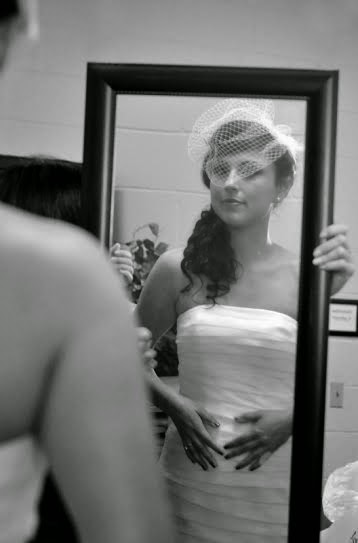 Marriage is never easy, it takes work. A LOT OF HARD WORK. “But what God brings together, let no man separate” (Matthew 19:6). Never have those words meant more to me than now. I know that as we grow together and begin a family we will face trials and tribulations and triumph every time. Not just because of the love we have for each other, but because that our Creator (God) is the center of it.

~*~
Author bio: Erica and David have been happily married for three years now. They currently reside in California as her husband finishes his assignment. Every few years they pick up and move whatever the needs of the Marine Corp may be.

Erica has taught in the classroom for five years. She received her bachelors from Excelsior College in Albany, N.Y. and is pursuing her masters in Spanish Education online from Nova Southeastern University.

After California they will be heading to Georgia where Erica hopes to put her new education to use in a high school classroom.

They hope to be parents in the next year or so and ask for God's blessing as they embark on the journey.
Posted by Alexis at Thursday, February 19, 2015