True Love Stories: The Cutest Nurse in the Navy

God knew when Laura would marry the man of her dreams and so did her Mom!

But who knew God would inspire Laura to speak four little yet oh so major words to her boyfriend Steve during a water gun fight in her apartment? Four words that changed their story forever.

What were those four words and what was Steve's reaction? You'll have to read today's featured true love story to discover the answer! :)

My story begins before Steve and I met. Two years before I traveled with my then-boyfriend to his parents’ house for the weekend. As we left Springfield, Missouri, I knew—God speak?—that the man I was with wasn’t the man I would marry. I could “see” my wedding and the man waiting for me. I couldn’t see his face. But I knew it wasn’t the man I was with. Sure enough, we eventually broke up.

In April of 1987, Mom told me, “You’re getting married this year. I feel it.” And she started preparing. I humored her, but thought she was being kind of silly. After all, while I dated, it was different guys and no one I wanted to spend forever with. In fact, I figured I’d remain single forever. I didn’t think I’d ever love anyone like I had the guy I’d dated for four years.

In August, I went home to visit Mom. I went back to Springfield on Monday afternoon, and a guy I was friends with, but not dating, called me up and invited me to a Backyard Bible Study. I was the one who’d started Greg’s involvement with Backyard Bible Studies, when he went with me to a few I attended. Greg didn’t fit in with the particular group that I mostly attended, since he thought more outside the box. So he started his own with other kids that didn’t fit inside that particular box. I didn’t really like Greg’s choice of people he invited to his, but I went to both—one for the fellowship and the study, the other to support Greg.

Anyway, that afternoon when Greg called, I was tired and didn’t really want to go out. I wanted to curl up with a book, but to be polite I asked Greg who would be there. I intended to refuse, begging off with exhaustion. Greg started rattling off names. And then he said “Steve.” I knew a Steve. I knew several men named Steve. But something made me ask, “Steve, who?” And Greg told me. “He just got out of the military, he was back in Springfield, and he attended church Sunday.” So I decided to go to check out the new guy.

Steve and Greg were playing Bible-opoly when I arrived at Greg’s. They put the game up and we went outside. To this day, I don’t remember who else was there, but when I saw Steve—another God speak?—I knew this was the guy I was going to marry.

I am, by nature, a very quiet, shy person. But with Steve I was rather forward. I remember Greg staring at me in shock. I asked Steve about who he was and what he did in the Navy. He told me he was a Navy “doc” stationed with the Marines. A “doc” is kind of the equivalent of a RN. I think I surprised everyone there when I told Steve he was probably the cutest nurse in the Navy. But it piqued his interest.

After the Bible study, Steve and I went to McDonalds and continued talking and getting to know each other. And from that moment on, we were a couple.

One Sunday night after church our single’s group went to McDonalds for our usual outing. It was pouring down rain, and Steve wanted to be a hero and drive my car up to the entrance so I wouldn’t get wet. I drove a 1969 VW bug named Twinkie. I told him “She won’t let you in.” Steve laughed at me. “It’s a car.” So I gave him the keys. He went to Twinkie and tried ten minutes before I went out and opened the door. He claims I didn’t tell him there was a particular trick to opening the car door. I never thought there was. I just knew that no one else could unlock Twinkie. I figured she knew me and wouldn’t let anyone else in.

In October, Steve and I had a water gun fight in my apartment, and I opened my mouth and said words that I still don’t remember saying. It must have been God again.

He said, “You asked me to marry you. I accepted.”

“No, I didn’t mean to say that!” I don’t even remember thinking it!

Steve shook his head. “Too late. I already accepted.”

We married December 19, four months after we met. 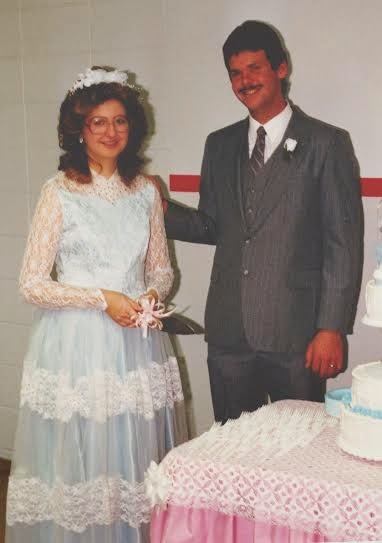 I was right. I don’t love Steve the way I loved the other guy… I probably didn’t even know what love was back then. But Steve and I have been married twenty-eight years now. I am glad God knew, better than I did, who I would marry.

~*~
Author bio: Award winning author, Laura Hilton, her husband Steve, and their five children make their home in Arkansas. She is a pastor’s wife, a stay-at-home mom and home-schools. Laura is also a breast cancer survivor.

Her publishing credits include three books in the Amish of Seymour series from Whitaker House: Patchwork Dreams, A Harvest of Hearts (winner of the 2012 Clash of the Titles Award in two categories), and Promised to Another. The Amish of Webster County series, Healing Love (finalist for the 2013 Christian Retail Awards), Surrendered Love and Awakened Love followed by her first Christmas novel, A White Christmas in Webster County, as well as a three book Amish series with Whitaker House, The Amish of Jamesport series, The Snow Globe, The Postcard in April 2015, and The Bird House in September 2015. Other credits include Swept Away from Abingdon Press’ Quilts of Love series.

Laura is a member of American Christian Fiction Writers and a professional book reviewer. 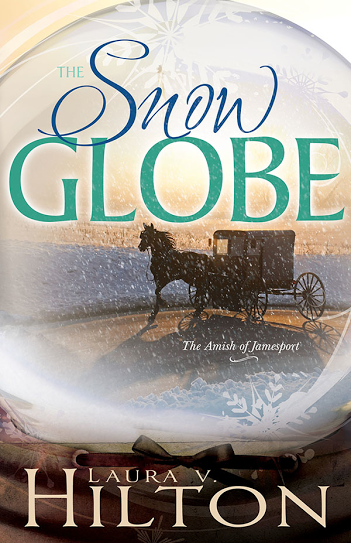 Victor Petersheim has left the Amish and works on a river boat on the Mississippi River, spending three months on the river then having three months off. During his off-work months he returns home to his Amish community and helps out on his grandparents’ farm. When he returns home after his most recent absence, he discovers his grossmammi has developed health problems and they’ve hired Esther Beachy to be a “mother’s helper.” Victor is unsettled by this woman living in their home, but has to accept it. Esther loves listening to Victor’s grandmother’s stories and while puttering around in a store while the grossmammi’s in the hospital, she discovers a snow globe that depicts an area where the Petersheims used to live. She buys it as a gift for the grossmammi to cheer her up during her hospitalization. Victor is touched by Esther’s gift and her care for his grossmammi, and strives to be friendlier. Will Esther’s gentle heart draw him back to the community? Or will he return to the river once again?