"This I Promise You" as performed by the popular boy band from the late 1990's, *NSYNC, reminds me of today's featured story.

The story centers on JoAnn--a feisty, independent, strong-willed and sweet woman--who met a certain tall, handsome and compassionate man of God named Jim Durgin. How they met is certainly interesting and how they fell in love is beautiful and captivating!

JoAnn and Jim's true love story is proof that when you seek God first in your search for true love, He will not disappoint and you'll become a better person in the process.

So without further ado, here's the story...

Authors always have a story, and the following is the “nutshell” version of my “true life” love story with my husband, Jim. My mother claims this is the story I should write, but in a way I did; there are many parallels between our story and that of Sam Lewis and Lexa Clarke in my debut novel, Awakening. The character of Sam is loosely based on Jim, and Lexa is based on yours truly (including teasing Jim about his old station wagon which I nicknamed “the bomb”).

Before the ink was dry on my college diploma, I moved from Indiana to Dallas, Texas without knowing a soul there. In hindsight, I was either independent or crazy (probably a bit of both). After working in a small advertising agency for a year, I found a great job in a big downtown law firm. Walked five blocks to Neiman Marcus on my lunch hour wearing three-inch heels. Ah, those were the days! This was also back in the pre-fax/pre-email days (i.e., the Stone Age as my children would say) when we used courier services to transport documents across town. When I called Wingtip Couriers, I’d often speak with a lovely girl named Susan from Ohio. One Saturday morning, I was having breakfast with a friend, Margaret, and she introduced me to another girl…Susan. From Ohio. And yes, from Wingtip Couriers.

A group of us, including Margaret and Susan, made plans to go to dinner a few weeks later. I’d been dating someone, but I suspected it wasn’t going to work out. I gave my friends strict instructions not to fix me up. However, like all really good friends, they paid absolutely no attention. Come to find out, both Susan and her then-boyfriend (now-husband) Marshall prayed independently about whom to introduce to poor, lonely JoAnn. They both came up with the same guy: Dallas Theological Seminary (DTS) student, Jim Durgin. Wait, it gets better. Jim had gone on a blind date a few weeks before with the runner-up to Miss Texas (no pressure there) who blew him off (her loss). So, he was very reluctant for another blind date.

Our first date was for the DTS Spring Banquet. Jim showed up on my doorstep—six foot two, tall, dark and handsome in a midnight blue tux—and I swooned. Then when I heard him sing in the men’s chorus, oh be still my heart! Turns out, the banquet was held over three nights, and Jim had a different date for each one. Ahem. I’m thankful I didn’t know that until much later! Fast forward. Jim and I became good friends and we often went to dinner together and to the movies. We attended different churches, but I sometimes attended his services.

At some point, our relationship slowly began to change, but Jim wasn’t quite sure I was the girl for him. Frankly, he questioned my spiritual condition. We shared what I call the “infamous Red Lobster dinner” where I basically stomped off, mad and hurt. How dare he? Shortly thereafter, Jim went on a singing tour across Europe and wrote “novels on postcards” trying to explain, grovel, apologize and make amends. I ignored the poor guy even when he brought flowers to my office. And called and left messages. I’d forgiven him, but I was embarrassed to tell him after so much time had passed.

In April of 1986, I was in a bad car collision with a large truck on my morning drive into Dallas. Put it this way: I walked away with my car nearly totaled and showed up at work with glass hanging in my hair (I was probably in shock but didn’t know it). The Lord protected me, but I knew the accident was His wakeup call.

At this time, I was in a Bible study with—you guessed it, Margaret and Susan—and I needed a workbook. I knew Jim worked in the DTS Bookstore on campus, so I stopped in a few days later to see if they had the workbook. They told me they’d order it. I inquired about Jim and they said he still worked there but would be graduating soon. That information hit me, and I knew I had to see him before he left Dallas. He was my friend, and I missed him. When I went to pick up the workbook, guess who waited on me?

We made up, started dating, but were we crazy? He was leaving Dallas and I had no plans to leave! He confided that—although he’d dated a lot—he’d never kissed a girl and promised the Lord the first girl he kissed would be “the one” he’d marry. I found that incredibly precious. Jim did kiss me not long before his graduation, but we were both confused. Where could it lead? At his graduation, I knew I had to let him know I was there for him (his parents weren’t able to attend). Three rows of graduates filed into a large auditorium and the Lord led me straight to Jim. I’ll never forget the "You’re Here!" expression on his face. The next day, I walked into the law firm and lost my job. A month before, that loss would have devastated me, but I had a complete peace about it and knew it was God’s will—He was opening the path for me to leave Dallas by removing the one thing in my life that was keeping me there.

Jim went home to Newport, Rhode Island, and then found his first position in a small church in Visalia, California. We talked, we wrote, I visited him in Newport, he visited me in southern Indiana. My mom and I were booked on a trip to Europe where we’d fly between four cities: London, Paris, Rome and Vienna. That year was one of the worst for terrorism in Europe and we cancelled our trip on the last day. The travel agent “happened” to have cancellation on a Royal Caribbean cruise, so we took that spot. On the cruise ship, we met a lady and her children, and her husband was home in California “stomping on the grapes” in ...Visalia, California. I planned on joining Jim in California so we could see if the relationship would work. Two weeks before my move—out of the blue—the vice president of the winegrower’s company called and offered me a job. I’d always despised girls who “followed” guys, but Jim and I both knew this was something we needed to do. And again, the Lord had paved the way.

We were engaged on Valentine’s Day 1987, and we married on his birthday on September 5, 1987 (you marry a man on his birthday, he won’t forget his anniversary). 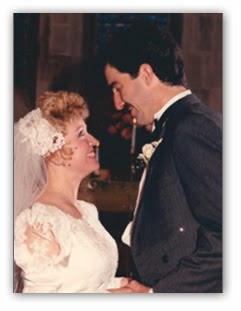 The Lord has blessed us immeasurably with three wonderful children: Sarah, Chelsea and Matthew.

I love writing contemporary Christian romance, and it’s my high honor and privilege. I believe in putting God first in a romance and, without fail, I believe in happy endings!

JoAnn Durgin is the author of five novels (and counting) in the popular Lewis Legacy Series and the series prequel, Prelude, as well as Catching Serenity, a standalone novel. Her novellas include Meet Me Under the Mistletoe; Starlight, Star Bright; Sleigh Ride Together with You, and Echoes of Edinburgh.

A member of the American Christian Fiction Writers and the Louisville Christian Writers, JoAnn lives with her husband and three children in southern Indiana. She recently retired from her paralegal position to write full-time.

JoAnn loves to hear from her readers at www.joanndurgin.com or www.facebook.com/authorjoanndurgin.
Posted by Alexis at Thursday, February 12, 2015