True Love Stories: I Was Blind But Now I See

"Love at First Sight" apparently not only happens in real-life, it lasts for a lifetime! Such is the story of Ginger Marcinkowski who knew she loved her now husband from the moment their eyes locked.

God works in mysterious ways-- a saying that rings true for most things in life. But who would have thought that God would bring two people--an American soldier and a rebellious teenager hitchhiking across Europe with her best friend--together at the famous Hofbrauhaus in Munich, GERMANY?

And who knew that after only two days of dating, a marriage proposal would happen? God works in mysterious ways indeed.

Read on to find out how in Ginger's true love story...

An old man kneeled at the foot of a featherbed crowded with children and quietly prayed. He knew their lives were filled with the pain of an alcoholic and abusive father and a rebellious mother. With his voice just above a whisper he asked God to direct the lives of those children and someday provide them with spouses who had hearts for the Lord. I was one of those children and the old man was my grandfather.


At the age of 17, my best friend and I, both unsaved and rebellious, boarded a Freddie Laker airplane and departed for Scotland where we spent several months hitchhiking across Europe. More than one time, we found ourselves in dangerous situations, but God’s hand was upon us. Late on August 4, 1971, we sat in a Rome train station trying desperately to panhandle enough money to get to Munich, Germany, where money from home awaited. I tried to sell my graduation watch to passing tourists, but no one spoke English. We sat in the cold terminal, lonely and discouraged. Moments later, a woman who’d been watching our dilemma finally spoke. “Girls,” she said in perfect English. “What do you need?” Excitedly, we explained our situation. Without hesitation, she gave us the needed money and promised to pray for us.

Our next day arrival into Munich gave us reason to celebrate. It was my eighteenth birthday. We cleaned up at our youth hostel and departed for a night on the town at the famous Hofbrahaus. As we cautiously stepped inside the doors of the local meeting place, hoots and hollers of joyous patrons filled the air. The sweet smell of bratwurst and hops permeated every corner of the building.

“Hey!” My head swung around in time to catch the wide smile of a uniformed soldier. “American girls!” Another soldier was standing on the table waving his arms. “Over here.” Too young and foolish to refuse, we made our way to the long wooden table where eleven soldiers stood politely, each eager to find a place beside two girls from their homeland. I squeezed in between two of the young men, when one of them exclaimed that the seat next to me belonged to another soldier who had gone to the rest room. We talked and laughed for a few minutes, sharing news of where we were from and what we were doing in Germany.

Signaling my friend that it was time for a powder room break, we excused ourselves and rushed toward the back of the building. As we rounded the corner, I almost bumped into the backside of a soldier bent over a cigarette machine. I gasped and then giggled, poking my friend in the side. “That’s the man I’m going to marry,” I said. The soldier stood and turned around. Our eyes locked and in that one moment, I knew I loved him. Two days later, under the clearest star-studded sky I’d ever seen, he asked me to marry him. 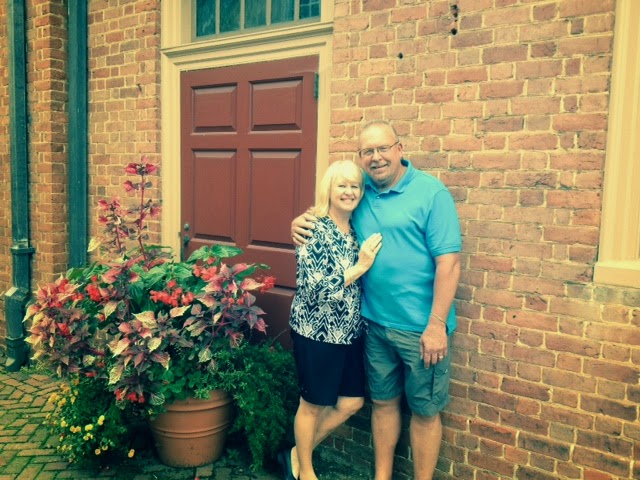 It’s been forty-three years now. I reflect continually on how the prayers of my grandfather and the grace of God worked to bring us together. Without the kindness of a stranger in that Rome train station, I might never have met the man I so love. Had it not been my birthday, I might have never gone to that restaurant. Had it been any other day, my husband’s Special Forces team would not have been in Munich.

I didn’t come to know the Lord until my late twenties. My husband’s salvation came years later. For thirty-nine years, we never fully recognized how God’s hand had brought us together. Even as Christians, we failed each other so many times in ways that would tear most marriages apart. Forgiveness was difficult and trust elusive. Through it all, God gave us a reason to hang on. Finally, as we fully submitted ourselves to God, we came to recognize His plan for our marriage.

Looking at my precious husband today, I see the true beauty of God’s hand on our lives. Drifting into retirement, our hearts are again as joyous as when we were newlyweds. God brought us full circle so that we’d recognize the promise we made to each other even before knowing Him as our Savior. He made us realize that His hand was on that special moment we first met. It was He who directed every scene to draw us fully into the blessings He has given us today.

Now, when night arrives, my husband and I sneak into our visiting grandson’s bedroom and kneel at the foot of his bed to pray for the Christian woman he will marry some day. As we rise, he kisses me gently as a reminder that someone prayed for us.

~*~
Author Bio: Ginger Marcinkowski is the author of newly released, The Button Legacy: Emily’s Inheritance, a story of one man’s legacy of faith, told through buttons, and widely acclaimed Run, River Currents. She currently writes a monthly column for Book Fun Magazine which boasts over 400,000 subscribers.