“Just let God do His thing. It’s easier for me to say that now but I really had to embrace that. Once I embraced that I wanted to focus on me and be sure that I was a whole person and I was enjoying my life as me, that’s when I met my husband.”
~Mrs. D’Anya Brezzell 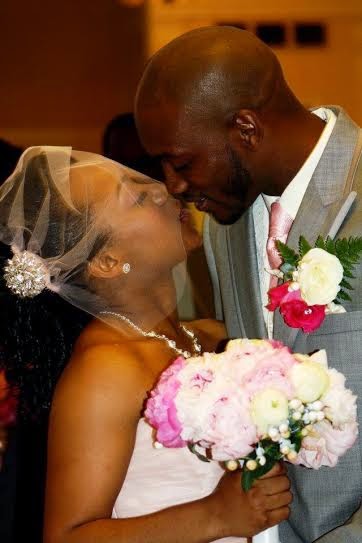 He met her at a Friday night mixer hosted by a church in Maryland. She lived in New York at the time and was in town to visit her sister-in-law. The date was July 2011. He was the photographer for the event.

Nick the photographer walked over to D’Anya and introduced himself. He wanted to take her picture. After the photos were taken, D’Anya and Nick had their first real conversation and in the moment, D’Anya realized for the first time that was “it.”

“It was one of those things and it was funny because we’d both been in long term relationships and it didn’t work out,” she said. “We both were at a point where we said we need to just focus on ourselves and stop trying to find somebody.”

Nick took a step of faith and asked D’Anya for her phone number. Thirty minutes later, Nick approached D’Anya again, asking for her number because he did not save it properly in his phone. It was a courageous action that to D’Anya spoke volumes about Nick’s character as a man.

“Nick is what I like to call, ‘A man’s man’. He reminds me so much of my dad,” said D’Anya. “Little girls want to marry a man who has the best qualities of their dad. Nick takes on what I call the ‘three-P’s’ that are non-negotiable when finding a mate: He’s a provider. He’s a protector and he’s a priest.”


After their first telephone conversation, D’Anya and Nick spent every weekend together. D’Anya would often visit Nick’s church in Maryland to perform special music on stage during the worship service. One Saturday morning after performing, D’Anya sat down and had a serious, silent one-on-one conversation with God.

“You know, God, I moved to New York without your permission and where I really want to be is here,” D’Anya said. “But I want to be here knowing that You have orchestrated for me to be here.”

D’Anya is a teacher and wanted to stay in that career. So she filled out online profiles for school systems located in Maryland. Soon after, D’Anya received a phone call from a representative from a charter school in Washington, D.C. who wanted to arrange an interview. D’Anya was certain of God’s leading when this school system she did not fill out an application for decided immediately to hire her which moved D’Anya to another heart-to-heart with God.

D’Anya filled out the paperwork and went through the necessary employment procedures. Meanwhile, she said another silent prayer.

“I told God if He wants to me be there, I need a financial blessing as well,” she said. “So the school exceeded my expectations and gave me a signing bonus. So I knew I had to move to Maryland.”

The Week Before the Proposal

After two months of dating Nick said to D’Anya, "You know, we should just get married. We’ve been there, done that. It’s like when you know, you know."

The marriage conversation happened in November 2011.

“He said he’s from a traditional family like me so he needs to talk to my dad to ask for my hand in marriage,” said D’Anya. “My dad is a tough cookie—no man is good enough for his girls and he has this like, sternness about him even when he has his idle face on. He’s very intimidating.”

A fearless Nick and a cautious D’Anya traveled to Massachusetts so Nick could meet her dad.

“My dad and Nick bonded over a common love—fishing. My dad told Nick before they finished fishing that he was going to give Nick his blessing even before he asked based on the good character he (my dad) saw in Nick over the past weekend spent with family,” D’Anya said.

It was the first week of December 2011 when Nick set up the scene for the real marriage proposal. He asked D’Anya to come over to his house in Maryland and bring her dog so they could take Christmas photos. Nick turned the living room into a studio with his professional camera equipment. He set the camera on a timer and began the photo shoot.

“As we’re taking pictures together, he kisses me for the first time and it was caught in the cycle of pictures,” D’Anya said. “He’s got the camera going every seven seconds and that’s when he proposed so he caught my real reaction. I was surprised!”

Finding the perfect dress to fit her short and petite body frame was a concern for this bride, until she found the dress that was made just for her in David’s Bridal.

“I tried the off-white, one-shoulder dress. It was really pretty and I was like, 'This is really beautiful,'” said D’Anya. “But my sister-in-law was like, ‘Try on the pink one.’ And I was like, 'Pink?! No one’s going to wear a pink wedding dress! That’s so non-traditional. I’m a traditional girl.'"

But the sales associate convinced D’Anya to try it with one simple compliment.

D’Anya tried on the pink dress and emerged from the dressing room in love with it and unexpectedly caused quite a stir.

“The people in the lobby stopped looking at their brides and looked at me when I came out of the dressing room,” she said. “Everyone there said “yes” to the dress!”

“We actually got married three weeks before our wedding in Maryland on March 9 which is my birthday,” D’Anya said. “The pastor prayed with us at the office in the church, talked with us, signed the marriage license and that sealed it.”

D’Anya became Mrs. Nick Brezzell for the second time in April 2012 during their wedding ceremony held in front of family and friends at D’Anya’s church in Springfield, Massachusetts.

“I knew I should get married at home—the church was free, the church was beautiful,” D’Anya said. “It was free because I grew up there, my parents had their membership there and my grandma had been the organist for like 80 years. So it only made sense and then my grandmother really wanted to play me down the aisle.” 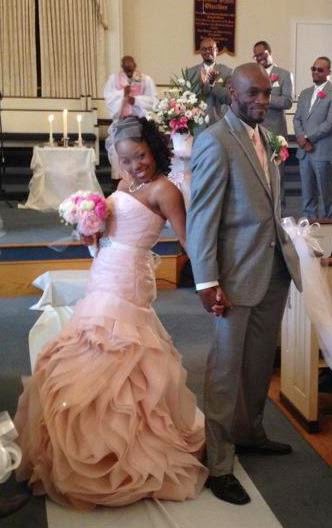 A baby born on Valentine’s Day

“She was our surprise baby,” D’Anya said of her and Nick’s firstborn child, Payton who will turn two years old today. “She’s a firecracker in attitude, stature and all of that. She’s not a pushover by any means.”

“He is a miracle baby like Payton. He was planned. We wanted to get it done and get it out the way,” D’Anya said. “I think Nick really wanted another girl but he’s happy with Cole.”