Interview with Gail Pallotta, author of "Barely Above Water"

Let's welcome Gail Pallotta to the blog today. She's the author of a book called Barely Above Water and today she's here to talk about it! Enjoy! :)

~*~
My interview with Gail

Alexis: What inspired you to write this Contemporary Romance, Barely Above Water? Talk about how you chose the title too.

Gail: I have Chronic Lyme Disease, but by the grace of God and with excellent care I’m able to lead an active life. By way of the grapevine, I began to receive inquiries asking how I found help. Hearing people’s struggles to find treatment, I decided to write a book detailing some of my symptoms and treatments and include a section in the back by two experts.

I wanted my novel to be fun to read, so I added a romance and a rag-tag swim team. My daughter’s many years of swimming and eight years of coaching inspired the team.

I titled this book after much thought. A reference to water seemed a natural choice because the story involves swimming and it’s set in an area that’s a peninsula. However, I needed words pointing to a struggle to survive. Thus, "Barely Above Water".

Alexis: Tell us about your story’s heroine, Suzie Morris. Describe her looks, heart, and passion for life. Include insights into her personality and the reason for her character flaw.

Gail: In Matt’s thoughts, Suzie is a “hot chic.” She’s thin, and quite a few of her clothes are baggy because she lost weight when she grew ill, but she’s still attractive. When Matt’s co-worker suggested Matt hang out with Suzie, Matt “could see Suzie’s crystal clear, blue eyes, her little nose and thin, perfectly etched lips. She was kinda’ skinny for an athlete, but gorgeous.”

Suzie’s passion is to get rid of the illness wreaking havoc on her life.

As far as her personality, she’s an extrovert who enjoys people. She has a healthy competitive spirit and thinks outside of the box. Right now, she’s lost self-confidence because the malady is causing her lots of problems, and her boyfriend dumped her because of it. She’s always loved God and depended on Him, but she needs His help even more than ever now, and she asks for it.

Suzie is dealing with a lot—an illness, being dumped by her boyfriend, not having family still alive and doctors who are clueless about how to help her. You’ve said that she is a Christian. How is her faith getting her through these tough times?

Suzie believes God directed her to the chiropractor who successfully treats her. She’s convinced if she prays and follows God’s lead, He will take care of her. Her faith gives her the strength to persevere and hope.

Alexis: Why did Suzie want the job coaching a swim team? Why is she passionate about transforming them into winners?

Gail: Suzie left her job as a magazine editor to move to Destin to receive the treatment she needed and took the only job she could find.

As a championship swimmer in her teens, Suzie has a competitive spirit. That’s coupled with the fact that these swimmers are children of the city’s service workers who help make the tourist season succeed. Most of them have little experience swimming. Some don’t even know how. As Suzie works to perfect their technique, they grow encouraged and try to become accomplished. She wants them to see their hard work pay off and grow confident in their abilities, which will give them more confidence in life in general.

Alexis: What is Suzie’s boss’s name? In what ways does he renew “her belief in love” and does that renewal carry on through the story? Or do they face obstacles?

Gail: Matt, Suzie’s boss, has sworn off women, but he falls for Suzie, and she’s attracted to him. When he and Suzie go out, he’s complimentary toward Suzie and treats her well. For that reason and the chemistry between them, she opens her heart to him. Unfortunately, Matt’s had a problem coping with illness ever since his mother died from cancer. When he learns of Suzie’s mysterious malady, he breaks up with her.

Alexis: Tell us more about the hero of this story (Suzie’s boss). What is his background? What about Suzie attracts him? What are his likes and dislikes in life?

Gail: Matt’s a great guy, but he’s suffered losses that have left him going through the motions of living rather than embracing life. When he was in high school, he was a football star. He was really good and dreamed of a pro career. However, he injured his knee and ended up not playing anymore. Then, his mother’s death shattered his heart.

At first, he’s attracted to Suzie’s looks, but as he learns more about her, he respects her personality, intelligence, and problem-solving ability. Later, he’s impressed by her fortitude, which she attributes to her faith in God.

Matt’s heart’s still with football, but he also enjoys being around the swim team kids and wants to see them win. He likes his job as head of the parks and recreation department in Okaloosa County as well as he would any other than playing pro football. In his leisure time he enjoys walking on the beach, the harbor or a boardwalk. He’s a pretty laid-back guy without many dislikes, but he is bitter toward his dad and his high school girlfriend. They insisted he drop his dream of playing football, find a good business school and pursue a more realistic career.

Alexis: What was the most rewarding part of the writing process?

Gail: Knowing I was doing something that would help someone suffering. I realized I may never hear from that person or persons, and I probably would never know who they are, but I knew Barely Above Water contained valuable information about this little-understood disease.

Alexis: What’s the take-home message that you want your readers to remember about this book?

Alexis: If you were not a writer, what would you be? Why?

Gail: I have a background in public relations. Also, when my husband built houses I decorated them or worked with the buyers to do so. I enjoyed both. If I were to return to public relations, that would be because I enjoy talking with people. If it were decorating, that would be because I liked dreaming up a decor the way I do my characters. However, I’m happy writing books!

Gail: Thank you for having me.

Award-winning author Gail Pallotta’s a wife, mom, swimmer and bargain shopper who loves God, beach sunsets and getting together with friends and family.
A former regional writer of the year for American Christian Writers Association, she won Clash of the Titles in 2010.

Her teen book, Stopped Cold, finished fourth in the 16th Annual Preditors and Editors readers’ poll and was a 2013 Grace Awards finalist. Barely Above Water won Honorable Mention in the Reader’s Favorite 2017 Book Award Contest in the Christian - Romance - General Category.
She’s published five books, poems, short stories and two-hundred articles. Some of her articles appear in anthologies while two are in museums. Gail loves to connect with readers. To learn more about Gail and her books, visit any of her social media sites.

~*~
Book Blurb: An illness comes out of nowhere and strikes Suzie Morris. Her boyfriend dumps her. 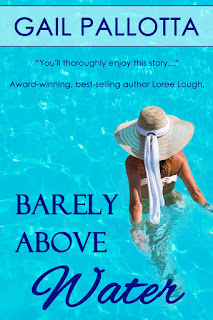 She has no living family, and her physician can’t diagnose the malady. Suzie relies on her Christian faith as she faces the uncertainty of the disease, and turns to a renowned alternative doctor in Destin, Florida.

Her handsome boss renews her belief in love, but learns of her mysterious affliction and abruptly cuts romantic ties. Later he has regrets, but can he overcome his fear of losing a loved one and regain Suzie’s trust?

a Rafflecopter giveaway
Posted by Alexis at Monday, October 16, 2017