A Prelude to Christmas: LoRee's story about broken hearts and restoration 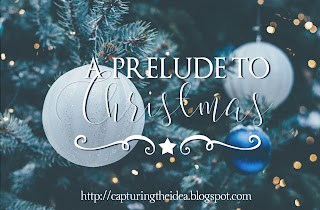 Welcome LoRee Peery to the blog today! She's here to share an excerpt from her holiday romance story, Christmas ‘Couragement. 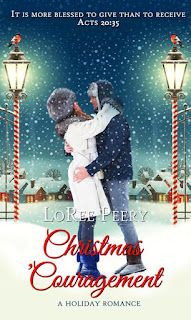 Book blurb for Christmas ‘Couragement:
Liam once approved of helping others, but not anymore. He lost his mother due to a crazed street person, and he's hardened his heart. Now a successful photographer, he’s returned to set up shop in his hometown--directly across the courtyard from his sister’s best friend. Zoe runs an outreach center and encourages the homeless and needy, especially at Christmas.

Nursing a soft spot for Liam that started as a girlhood crush, she sets out to help him by creating her unique brand of encouragement cards. Her hope is to reignite the fire and love for Christmas and God, which Liam once had. The cards and ornaments countdown to Christmas, but what if Liam doesn’t want to be one of Zoe’s projects? What happens when her crush grows into something more? What if they both receive more than expected?

~*~
Fill out the book giveaway contest entry form on the Rafflecopter widget for your chance to WIN a copy of LoRee's book:

A charming, feel-good story that stirred the spirit of Christmas within me.

LoRee Peery’s CHRISTMAS ‘COURAGEMENT is a touching romance between two broken people who find reconciliation through God’s grace, and a rekindled love for each other.

Agape love is love in action, and Peery’s heroine embodies the very definition of Agape love. I found this compassionate character to have depth, as well as charm, as she supplies warm clothes and encouragement to the downtrodden of Lincoln’s inner city homeless. However, life had not always been so generous to her, as she struggles from a past that continually gnaws at the edges of her well-being. But instead of focusing on her own problems, this character focuses on Christ, allowing Him to work through her weaknesses to bring hope and encouragement to everyone she encounters, including the hero.

Bearing the scars of a secret tragedy, the hero goes through the motions of his black and white life, until he meets up with a childhood friend at Christmastime. As the heroine gently coaxes him out of despair with simple hand-made Christmas cards that share the message of Christ, the reader witnesses a man who finds the light of reconciliation in God’s unconditional love, as well as a budding romance that is sure to leave the reader feeling warm and satisfied.

I highly recommend this charming Christmas story for its light-hearted message of hope during the holidays.

~*~
Excerpt from the Prologue to Christmas ‘Couragement:

Her heart did a flip-flop at the sound of his deep voice. They’d never be in the same school again. Next year he’d go to high school at the same time she and Meredith advanced to middle school.

“Let her be, Liam.” Meredith hit her brother on the shoulder. “So what if she says the word without the beginning letters? I want to always be a little girl at heart.”

Zoe reached for Meredith’s hand. “That man on the bench. He’s sad. He’s cold and alone. I want to make a Christmas card to ‘courage him.”

“OK, squirt.” Liam circled her tender earlobe, freshly pierced. “I got it. You want to encourage the man to make him feel better.”

“Right. Could you ask your mom to take us to the craft store on the way home so Meredith and I can make a card tonight? Let’s look for him next week after the movie.”

That night the girls sat at Zoe’s kitchen table, now covered with scrapbooking materials. “Meredith, since Mom works at the hospital on Saturdays, I’m glad your mom drives us. Do you think Liam will walk us girls around a couple blocks by the theater? I’ll pray first on Friday night.”

“I’ll pray too. I want to give this card I’m making to just the right person.”

Zoe worked her tongue while she cut silver paper. “Did you see the face of the man on the bench today?”

“I did. He made me think of Santa Claus.” Meredith swung her heavy, long braid over her shoulder.

“It shouldn’t be hard to find him with that white beard. I want this card to go to him. I wish I was older and had a job so I could buy him a big blanket to keep him warm.” Zoe handed the scissors to Meredith.

“You look for him. I want to look for a raggedy woman. Maybe even someone who has a place to sleep at night, but looks lonely and lost. God will show me if a sad lady needs Christmas cheer from my card all decorated like a beautiful tree.”

Three weeks later, the girls waited inside the lobby for Liam. He and his friends had met for a sci fi movie, yet to end. Meredith bopped to a tune plugged into her ear.

Outside the theater, the girls held hands, Liam walking behind so it didn’t appear as though they were together.

A homeless man pushed off the wall of the building and into their path. “You girls are angels.”

Liam’s shoes slapped on the sidewalk as he ran to catch up. He placed a hand on each of their shoulders, preventing them from getting too close to the man.

Zoe smiled at the man who wore a light jacket over a frayed, hooded sweatshirt that looked more gray than black. “We’re not angels, we’re ‘couragers.”

“I like that better. It takes courage to approach a reprobate like me. I’m not gonna hurt them, laddy. You girls encouraged me last week by that beautiful gold angel card. Prettiest thing my hands have held in a long, long time. You gave me hope, so much I’m gonna clean up and find a church Christmas Eve.” He gave a slight bow and moved aside.

The kids didn’t say a word as they walked the two blocks to the SUV.

Liam clamored into the front.

Zoe waited to open the door. “Meredith, let’s always remember each other at Christmastime.”

“I don’t know.” She braved a look at Liam through the window, where he slouched in the seat, drumming his fingers on his knee. “He always keeps us safe when we walk downtown.” I’ll never forget Liam, either.

~*~
Author bio: Christian romance author LoRee Peery attempts to see God’s presence every day. Often that gift comes from nature, when the call of a cardinal draws her to look for the distinctive flash of crimson. A meadowlark’s melody always transports her to the farm where she grew up. A rainbow holds special significance, since one appeared over her father’s grave the day of his funeral, assuring her of the Lord’s presence. She clings to 1 John 5:4 and prays her blended family and dozen grandchildren see that faith. Find LoRee at www.loreepeery.com or Pelican Book Group http://tinyurl.com/kwz9enk 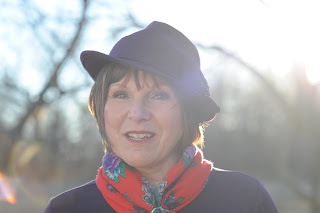