Let's welcome Carole Brown to the blog! She's here today to answer all of my in-depth questions about her book, Sabotaged Christmas AND she's giving away a copy of her book to the winner of the book giveaway contest!

The winner can choose a Kindle e-book or paperback copy.  To enter the contest, fill out the entry form on the Rafflecopter widget below:
a Rafflecopter giveaway

Now on to the author interview. Enjoy!

*Questions from Alexis are in bold, answers from Carole are not in bold

Carole: Originally, I wrote a three book romance series, but when that didn’t work out, and the opportunity opened, I asked my editor about turning them into romantic mysteries. She was enthusiastic. With a bit of editing and rewriting, I was able to increase the mystery. A woman’s construction business, her birth and the co-protagonist’s past all intermingle and create subplots that not only keep the reader’s interest high but threaten Toni and her employees with a sabotaged Christmas.


Tell us about your heroine Toni DeLuca. What does she look and sound like (describe the sound of her voice)? Why did you give her an Italian heritage? What does she love about owning DeLuca Construction. How did she get that job?

Toni’s petite, but a strong woman. Dark black-haired, flashing brown eyes (with what Perrin calls golden flecks), she’s friendly, loves life and a vivacious type of person. She has a quick temper but is also kind hearted and a true Christian. She inherited DeLuca Construction from her deceased father, and although he taught her everything he knew about carpentry, she now leaves the labor to her supervisor and her four employees and contents herself with overseeing the business.

What is Toni’s relationship with her father? Do they get along? Did he raise her by himself or with her Mom? Why does she think he has deceptions?
She adored her father, and they had a good relationship. He did his best as a single parent, by attending her school functions, setting rules, but giving her the independence to see and make the right choices. In Sabotaged Christmas, someone is accusing her father of deception. Since Toni’s never heard such a thing, she’s a bit shocked at the news.

Tell us about those “mysterious pink notes” that Toni receives. What are they? Who are they from? What significance do they have in the story?

They are coy accusations with an intent of upsetting Toni. The culprit has his/her “harsh” agenda, and they play a big part in the plot.

Tell us about your hero Perrin Douglas. Start with his first name—what’s the origin. Did you create that or find it somewhere? Continue talking about Perrin by describing his looks, personality, strengths and flaws.

It’s an English name, meaning, in a general way: “Little Peter.” Most times, unless there’s a name that comes to me, a name I hear or love, or a name that has a significance to me, I use my trusted baby book. One of my favorite research books.

Perrin is tall, a bit of a academic, a history professor sans adventure/romance author. Although he’s published several nonfiction articles and books, he’s now venturing into fiction and has taken a hiatus to finish his book. He has brown hair, and blue/green eyes, wears glasses and is a bit awkward at times. He loves his son very much but isn’t an easy man to get to know.

What attracts Toni to Perrin? Why?

Toni’s kind heart draws her to the Douglas family, first of all. She can sense their need, sees deeper than either father or son realizes, feels their cry for peace and happiness, and knows that something is very, very wrong in their lives. In her attempt to “rescue/help” them, she ends up attracted to a man who sometimes lets his bitterness and fear of trusting get the better of him.

Why does Perrin have his doubts about women and God? Explain.

I don’t want to spoil the story, so I won’t go into too much detail here, but I will say, his past is not pretty. He not only blames those from the past, but himself which causes him to mistrust women and not having been raised in a godly home, he has no real sense that there is a God or one that could do anything for him.

Several factors may “ruin” Christmas for Toni. Can you tell us what they are and why?

There’s basically three: #1: The question about her father, causing her to view her upbringing with sadness and disappointment. #2: The damages on the construction sites that not only cost money but a loss of time and the possibility of her business reputation being ruined. Not being able to pay her employees due to these, is a big problem for Toni. #3: Last, Toni’s attraction for the one man who interests her, may not pan out. How can she be happy knowing she’s lost the one chance of being with him?

Why did you choose to set your story in West Virginia? Is Appleton a real town? What do you love about setting your story in that location?

West Virginia is a charming state. I wanted a homey, laid back community, and having visited WV numerous times, with lots of friends from there, I knew I could create what I needed from the area. Besides, I love WV.

Appleton is not a real town. The setting is not too far from the state capital, Charleston.

What can you tell us about the culprit and how he or she may “destroy Toni’s last chance at happiness”?

Resolving the puzzle of the three subplots might just destroy Toni’s natural happiness. The reputation of the parent who raised her is thrown into question. The possibility of a ruined business, and her own happiness all are at stake.

The culprit has one main agenda, but I can’t reveal that without ruining the novel story for readers. I encourage everyone to read the book and find out more of what’s happening in Toni DeLuca’s life.

I wrote this book because I wanted a romantic mystery series that featured different people in a small town setting. People who are friends who have their own unique lives that touch each other as they go about their daily lives. I want readers to sense the community spirit, and not only the love and friendliness but also the jealousies and problems and hurts and pettishness that can exist too. Life is not always pleasant, but when you work hard, trust God, and do the best you can, you can have peace and an inward joy. Hard decisions have to be made, forgiveness and hope has to be in place. It’s only then you can truly be happy. Toni DeLuca and Perrin Douglas made the right choices, eventually.

Thanks for the interview, Carole! God bless you and Merry Christmas! If you have a question for my readers, please ask it now.

Carole's questions for my readers: Can any of you guess Toni’s first name, her real name? 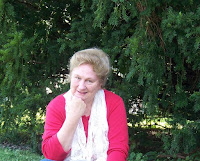 A companion book called West Virginia Scrapbook: From the Life of Caralynne Hayman, filled with tidbits of information about West Virginia, quotes, recipes from West Virginia and from Caralynne’s life, pictures and discussion questions for the novel is also available.

The first book in her Denton & Alex Davies mystery series, Hog Insane and Bat Crazy, the second book are fun, lighthearted novels that not only deal with the mysteries the Davies land in, but relationships too.

~*~
Book blurb for Sabotaged Christmas: Toni DeLuca, the Italian owner of DeLuca Construction, finds herself confronted with doubts about her father and his possible deceptions--all because of the mysterious pink notes she’s receiving. 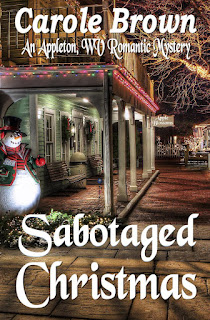 Relations with Perrin Douglas who has a troubled history—but the first man in years who’s interested her--is building to a peak. Yet Perrin‘s own personal problems and his doubts about women and God, keep getting in the way.

Gossip, a Spanish proposal, an inheritance, and a sabotaged construction business all converge to play a part in ruining Christmas for Toni’s employees. Will the mysterious person behind it all succeed in pulling off the biggest scam Appleton, West Virginia has ever seen?

Will this culprit destroy Toni’s last chance at happiness with the man of her dreams?