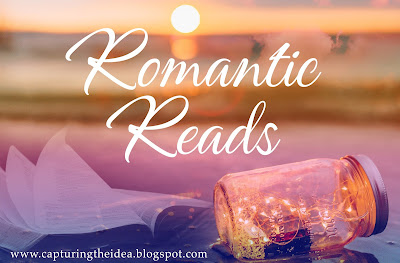 She's here to talk about her debut novel, This Wandering Heart.

Janine is offering a signed, paperback copy of her book to the winner of the giveaway contest hosted via the Rafflecopter widget at the end of this blog post!

Since mailing books internationally is expensive, you must be a resident of the United States of America to enter the contest. Enjoy your time with Janine!

Alexis: What inspired you to write This Wandering Heart as your debut book?

Janine: When I graduated from high school, I flipped through my father's road atlas. From my house, I was able to drag my finger along a path from my home to anywhere in the continental United States. Something about that realization unearthed a longing to set out on my own and discover everything from east to west. Now that I'm settled—married with children—I still struggle with that desire to wander wild.

Alexis: How did you create your main characters for this story?

Janine: Keira isn’t too dissimilar to me in one specific way, so she was relatively easy to create. I feel the same push-and-pull that Keira feels, although her wounds cut much deeper. As for Robbie, I knew I'd need to create a fantastic hero to walk beside her as she discovers herself.

Alexis: Tell us about your story’s heroine, Keira. What are her likes, dislikes, hopes and dreams?

Janine: During her abusive and controlling childhood, Keira read novels and watched travel television shows to mentally escape. Now, as an adult, she wants to photograph that world and share it with others who can’t travel. She also loves the freedom of traveling on her own, but she can’t seem to forget the guy she once left behind.

Alexis: Tell us about your story’s hero, Robbie. Describe his looks, personality and character.

Janine: Robbie is a kindhearted former football star with a great sense of humor that he uses to hide his insecurity thanks to a learning disability. Above all, he has a lot of integrity, but also a serious lack of impulse control that has gotten him in trouble in the past. Oh, and he’s real strong with auburn curls that peek out from under his baseball cap.

Alexis: What makes Robbie swoonworthy and conflicted about his feelings for Keira?


Janine: Robbie is loyal, especially to the women in his life: his mama, his sister, and his four-year-old daughter. So naturally, he feels a driving desire to help and protect Keira despite the fact that she hurt him in the past.

Alexis: What is it about Robbie that keeps Keira coming back to him?

Janine: He’s perfect? Is that an answer? I mean, he loves her so well and would give up almost anything to make her dreams come true. He once saved her from her father and encouraged her to imagine dreams in the first place. He’s the one man she’s ever known who didn’t want to keep her in a cage.

Alexis: Both Keira and Robbie have developed online personas centered on travel. Why?

Janine: Keira is a high school geography teacher so to keep some anonymity she started travel-blogging/social-media-influencing with an alias, Kat Wanderfull. Robbie stumbled onto social media, and wouldn’t still be on there if he’d never crossed paths with Kat Wanderfull who gives him hope that maybe there’s a right girl out there for him.

Alexis: What role do Keira and Robbie’s online personas play in their personal story offline?

Janine: Robbie’s pretty straightforward. He’s been the same guy since he was seventeen and first fell for Keira. He only hides his identity to make “Kat” feel comfortable chatting with him. But Keira has lived her whole life not knowing who she is. Her multiple names symbolize the people she has been and wants to be. That’s a big part of her journey—figuring out her true identity.

Alexis: Why did you set this story in Montana? What about that great state do you love?

Janine: My father introduced me to Montana. I used to love going out there and watching him and my brothers fish the Madison River. After he passed away, I wanted to find a way to memorialize him and give him the retirement he never got. Enter Chuck Matthews, Robbie’s father, who owns a fly-fishing resort on the Madison.

Alexis: Your debut book is the first installment in your Madison River Romance series. What can you tell us about the next books in your series? Will they all take place in Montana?

Janine: While this is an on-the-road romance, Robbie and Keira’s home base is Montana. The next two books take place almost entirely in the Madison River Canyon. The next book is about Robbie’s wild-haired, strong-willed sister, Ryann. She’s my hero!

Alexis: Who is Anabelle and what role does her mother play in creating conflict for this story?

Janine: Anabelle is the result of one of Robbie’s impulsive moments, but from the minute he knows about her existence, he acts as her protector. He cares for her the way a father should care for his daughter and gives up everything for her, especially when Anabelle’s mother abandons her. But now, she’s back and demanding custody. Robbie can’t let her take his girl away.

Alexis: Why do Keira and Robbie struggle with trust issues?

Janine: They’ve each hurt each in the past. Sometimes the best intentions aren’t enough.

Alexis: What brings Keira and Robbie together?

Janine: Keira has a big opportunity to land a travel television show if only she can convince the producers that her followers will fall in love with the person behind Kat Wanderfull. For that, she needs an assistant—and Robbie is the only one who can help her do that.

Alexis: What – or who – threatens to tear Keira and Robbie apart forever?

Janine: Robbie would give up anything for Keira, except his little girl. If this custody battle goes south, he may have to choose between them. Keira struggles with intimacy. Having Robbie close to her side is amazing—she knows from experience. But for her, losing him is devastating—she knows that as well. She can’t risk that pain again.

Alexis: As a Christian author, what role does your faith play in sustaining the fictional lives of your characters in This Wandering Heart story?

Janine: Keira’s desire to “wander” is pretty symbolic of our relationship to God. Fear and a need to be independent combine to keep up from trusting God with our lives. I know I feel that in my own faith. The lyrics from “Come Thou Fount Of Every Blessing” describe this perfectly: “Prone to wander, Lord, I feel it. Prone to leave the God I love. Here’s my heart, Lord, take and seal it. Seal it for thy courts above.” Bind my wandering heart to thee is my constant prayer.

Alexis: What do you want your readers to remember the most about your debut book?

Janine: One reviewer thought Robbie was too forgiving of Keira’s unwillingness to trust him. And I agree! It defies what most of us have experienced in life. But I hope they see the patience he has with her. He doesn’t force her, doesn’t pressure her, and certainly doesn’t cage her, not unlike how God pursues us. I hope readers rest easy afterward knowing that they are gloriously loved, the same way Robbie loves Keira.

Alexis: Now for the quick and fun questions in italics with your answers in plain font …

Coffee or tea? Sweet Tea! I lived in the south for eight years and I miss it!

Summer or Spring? Summer, because I get to travel!

Kindle or paperback books? Paperback a million times over.

Alexis: Thanks for the interview, Janine!

Prone to wander, Janine Rosche finds as much comfort on the open road as she does at home. 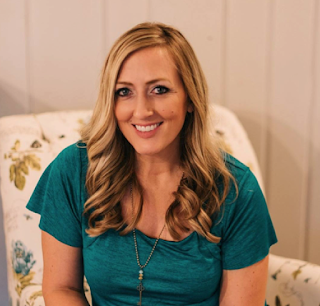 This longing to chase adventure, behold splendor, and experience redemption is woven into her Madison River Romance series.

When she isn’t writing or traveling, she teaches family life education courses to college students, takes too many pictures of her sleeping dogs, and embarrasses her four children and husband with boy band serenades.

~*~
Blurb for This Wandering Heart: 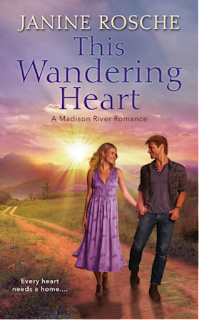 In the first entry in the Madison River Romance series, Keira Knudsen gets the traveling opportunity of a lifetime, but when she reunites with her first love, Robbie, she learns that even a wandering heart needs a home. ...

No one in the quaint town of West Yellowstone, Montana, knows that unassuming geography teacher Keira Knudsen moonlights as sensational travel blogger Kat Wanderfull. No one, that is, except for her first love, Robbie Matthews, who has just discovered the woman he is falling for online is the same one that broke his heart five years ago.

But Robbie has another problem: the mother of his daughter, Anabelle, has resurfaced after a three-year absence determined to rip Anabelle away from him. Robbie needs a steady paycheck for a chance at custody, and now, on the eve of a grand adventure that could give Keira a chance to flee her old, troubled life once and for all, she is in need of assistance.

With so much broken trust between them, Keira and Robbie must keep an arms-length away to make this partnership work. But the more time they spend together, exploring majestic places and sharing new experiences, the closer they get–until their secrets and dreams threaten to cost them everything.

~*~
Buy Janine's book on Amazon or Barnes and Noble

~*~
United States of America residents ONLY may enter this book giveaway contest for your chance to WIN a copy of this book by filling out the entry form on the Rafflecopter widget below:

a Rafflecopter giveaway
Posted by Alexis at Tuesday, June 02, 2020