Let's welcome my author friend Melissa Tagg to the blog and wish her a "Happy BOOK Birthday" because her NEW novel Now and Then and Always releases TODAY!

*Pause for cheers and congratulations!*

Isn't the cover of her new book gorgeous? 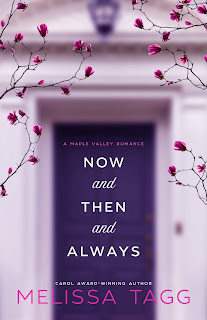 Today, you're in for a treat because we're going to learn so much about Melissa's new book via an author interview feature!

Now and Then and Always (Maple Valley Book 1)

Melissa: I don’t know why, but when I first started thinking about this book (about three years ago, actually!) I was really intrigued at the thought of writing about a man who is incredibly broken, who has lost everything in his life. Which sounds incredibly melancholy, but really, it was so interesting for me to write because I kept thinking to myself, “What if I’d lost all that Marshall has lost? Would I fall apart, too? Would I lose my faith, too?” There’s even a spot where Marshall asks his sister if she could keep believing that God is good and that He loves her if she’d lost what he’s lost. And I was really asking myself that same question as I wrote it. Could I keep believing?

But on a lighter note, I also just had a huge hankering to return to Maple Valley! I’d sprinkled my previous Maple Valley stories with intriguing side characters and I just knew that one day they’d all need their own stories. Similarly, I first mentioned the Everwood B&B in my 2015 book, Like Never Before, and at the time I knew one day I’d circle back to it.

Alexis: Now and Then and Always is the first book in your Maple Valley series. What’s the focus of this new series? Briefly share story details.

Melissa: I’m going to let you discover some of these things through reading the book…for instance, I don’t want to tell you what her greatest fear is because that’s a big part of her story unfolding on the page. But I can tell you that she has something—or rather, someone—in her past that she fears. She’s also carrying around quite a bit of hurt and loneliness. She’s hungry to belong somewhere, to have a family even if it doesn’t look like a normal family. What makes her happy: cereal, the Everwood B&B…and Marshall.

Melissa: The Everwood B&B was first introduced in Like Never Before. It’s a sprawling and weathered Victorian house. But it’s also full of charm and personality. We’re going to see it come to life throughout this story...and discover its secrets. Maple Valley is a quirky small town, divided in half by a river that runs straight through the middle of town. It’s the kind of place where everyone knows everyone…which can be hard for strangers to get used to, but more often than not, they end up falling in love with the place and the people who live there.

Alexis: Who is Lenora and what role does she play in this story?

Melissa: Lenora is the owner of the B&B. She took Mara under her wing months ago and invited her to stay and help run the place. You’ll discover she’s been gone for about five weeks at the beginning of the story. To learn more about where she is, you’ll have to read the book.

Alexis: Let’s talk about the hero of your story, Marshall Hawkins. What does he look and sound like? What is his worst weakness? What is his greatest strength? What or who brings him joy? What or who hurts his heart?

Melissa: Again, I’m not going to answer every question here because some of it, well, I want you to discover by reading the book! But some things you’ll find out right away about Marshall—he’s full of pain and he’s not handling it well. He’s lost his daughter, his marriage has ended, and he’s forced to take a personal leave at work. He’s in a dark, dark season…and yet, even in the early chapters, we’ll see little moments of light shining through. I adore the guy!

Alexis: Why does Marshall feel like his life is falling apart?

Melissa: As I noted above, he’s just lost so much—his daughter, his marriage, and his job, although that last one is only temporary. He’s lost his faith, too, and he hasn’t handled his pain well. He’s basically been living in a fog for about two years.

Alexis: What brings Marshall to Everwood and what compels him to stay at the B&B for more than one night?

Melissa: Marshall winds up at the Everwood on a stormy night. He pulls over in a storm while dealing with a migraine…he goes inside to escape the storm and also to make sure the people inside are safe. As for why he stays…you’ll have to read the book to find out.

Alexis: What do Mara and Marshall like – and dislike – about each other? Why?

Melissa: Mara loves Marshall’s dependability, his strength (which he can’t even see in himself), especially his kindness. Marshall senses a mystery in Mara and being the detective he is, he loves that. He also sees her desire to belong and to save the Everwood and he greatly admires that. They do have different ways of handling pain and making decisions and that causes them to clash sometimes.

Alexis: What role do faith, hope and love play in this story?

Melissa: You’ll see both Mara and Marshall deal with faith in different ways—for Mara, her faith is really only a surface thing at the beginning of the story. For Marshall, he was once a man of deep convictions and belief but he lost that right alongside everything else two years ago. Marshall, especially, doesn’t really understand how to hope anymore…but he starts to get glimpses of what his life could be throughout this story. And love…well, this is a romance. So it plays a big role.

Alexis: What’s your favorite scene in this story and how fun was it for you as the author to create it?

Melissa: Truly, my very favorite scene is the prologue where Marshall first arrives at the Everwood and realizes it looks exactly like a picture he’s been carrying around in his pocket for two years. I wrote that scene way back in early 2018 after a long period of not writing. And then in the rest of 2018, I didn’t write much at all due to my big move and house renovation. But I kept coming back to those prologue paragraphs and rereading them and telling myself that someday I’d find time to write this story. I feel like those opening paragraphs kept giving me hope for the rest of the story.

A couple other favorite scenes include Mara and Marshall’s meet-cute and the final scene in the last chapter…and the epilogue, too, because it sets up future books.

Alexis: If you could take a trip with Mara and Marshall, where would you go? Why?

Melissa: Maple Valley! But since Maple Valley doesn’t exist, I think the three of us would have a blast traveling to the Smokey Mountains.

Alexis: Now for the quick questions! Answer in italics.

Who are your favorite authors?
Lori Benton, Joanne Bischof, and most recently, Amanda Dykes

What’s one book that you simply cannot live without?
The Lady & The Lionheart by Joanne Bischof

What is your favorite season?
Autumn

Where is your favorite vacation spot?
Anywhere my family is! But also, I love the Carolinas.

How do you take your coffee?
Black!

Melissa: Thanks for having me! Can’t wait to get this book into readers’ hands. It’s a huge piece of my heart on the page, so it means the world to me when readers take the time to dive into one of my stories. 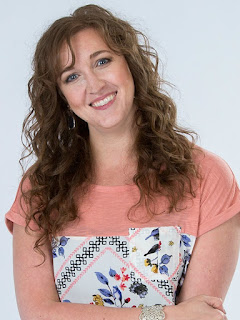 Melissa's recent releases include a 2018 ACFW Carol Award Winner (One Enchanted Noel), an RT Book Reviews TOP PICK (All This Time) and a Publishers Weekly Spring Top Ten Pick (Like Never Before).

Melissa has taught at multiple national writing conferences, as well as workshops and women's retreats. When she's not writing, she can be found hanging out with the coolest family ever--not that she's biased--watching old movies, and daydreaming about her next book. Melissa loves connecting with readers at www.melissatagg.com and on Facebook and Instagram.

~*~
Book Blurb for Now and Then and Always:

“It was just a house. Just a weathered old house in a hidden grove, shuttered and still.”

Last year, after traumatic circumstances forced her from her job as a nanny, Mara Bristol finally found a place to belong—the winsome Everwood Bed & Breakfast at the edge of Maple Valley, Iowa. For months, she’s helped its owner, Lenora, maintain the ramshackle property despite their shortage of guests. But when Lenora fails to return from a month-long trip and the bank threatens foreclosure, Mara worries she’s once again alone . . . abandoned . . . about to lose the only true home she’s ever known.

Detective Marshall Hawkins is no closer to whole today than he was two years ago . . . the day his daughter died. Between his divorce, debilitating migraines, and a dependence on medication, his life is falling apart. And when a reckless decision on the job propels him into administrative leave, he has no other plan but to get in his truck and drive. A one-night stay at the Everwood was supposed to be just that. But there’s something about the old house—or maybe its intriguing caretaker—that pulls him in.

Together, Mara and Marshall set out to save the Everwood. But its secrets run deeper than they could’ve imagined. As they renovate the house and search for its missing owner, they’ll each confront the pain that brought them to the Everwood in the first place . . . and just maybe discover a faith and love to help them carry on.

~*~
Buy Melissa’s book on Amazon or Barnes and Noble