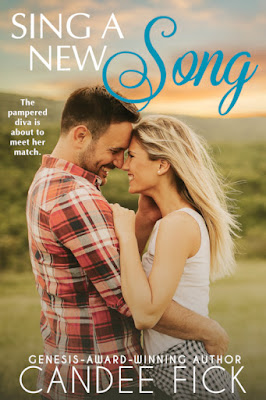 Today, you're in for a special treat! Candee Fick has written a new novel and she's giving away one e-book copy for the Kindle of the book giveaway contest winner!

But first, she's here to talk about her new novel, Sing a New Song.

Enjoy her author interview and remember to enter the contest via the Rafflecopter widget that you'll find toward the end of this blog post.

~*~
Interview with Candee Fick about her book, Sing a New Song:

Alexis: Why did you write this book? What was your inspiration for this story?

Candee: I started planning this book while writing the first in the series, Dance Over Me. In the first draft of that story, I had created a very unlikeable antagonist but she came across like a cardboard, two-dimensional prop. During the revision stage, I worked to give her a few positive traits as well as a solid motivation for why she acted the way she did. In other words, I asked myself what it would take for her to change, planned a rough outline of this current book, and then circled back to weave hints into the first two books of the series to set up her personal journey. Overall, the series drew inspiration from Zephaniah 3:17 and I knew that once Gloria also discovered the amazing depths of God’s love, her life would never be the same.

Alexis: Why is Gloria Houghton, your story’s heroine, known as a “pampered diva” and what kind of man would be her match?

Candee: Gloria is a talented actress who is used to occupying center stage as the star and therefore, she’s accustomed to the star treatment. The accolades. The attention. They boost to her self-esteem as a result of the applause and positive press.

On a personal note, she’s also the only daughter of a very rich businessman and—as we quickly learn in Sing a New Song—has been living off her allowance from a trust fund and therefore hasn’t had to work to support her lifestyle. A fancy car, sparkling jewelry, and the latest fashions are all a part of her world. Therefore, on the surface, she’s always looked for a man to spoil her, lavish her with attention, and keep her on that pedestal. But what she wants isn’t exactly what she needs. She needs someone to look beneath the façade and love her for who she truly is.

Alexis: Has Gloria always had a passion for singing? What does she love about it?

Candee: Gloria’s passion was the stage and whichever skills got her the most attention were the ones she cultivated. Musical theater productions allowed her to showcase both her voice and dancing skills with acting to tie it all together. But after injuring her knee and losing the spotlight, she finally focuses on the one thing she does the best. Sing. She’d probably tell you that what she loves most about singing is that the soaring notes and powerful lyrics cause an audience to feel a broad range of emotions and therefore, they remember the one who sang them.

Alexis: Let’s talk about the hero of your story, Nick Sherwood. What does he look like? How does he talk (tone, pace, with or without an accent)? What are his greatest strengths and worst weaknesses?

Candee: Nick is the epitome of tall, dark, and handsome with a beard and a slight Southern accent. Ha. Except when he first steps onto the page, he’s wearing coveralls and a tool belt, has greasy hands, and is mopping the floor. Not exactly the best first impression. But readers (and Gloria) will soon discover his ability to shoulder lots of responsibility, his servant nature, and his faithfulness to God, his family, and his friends. As for weaknesses, he holds people to a high standard (which can come across as judgmental), wars with jealousy when compared to others in his family, and hides his greatest talents.

Alexis: What is it about Nick that makes him a Jack-of-all-trades? What is his passion career-wise? Does he desire a singular career? Why or why not?

Candee: Nick’s current job title over Human Resources puts him in charge of the personnel at the Sherwood Hotel and Sherwood Theater. However, he’s such a servant that he often pitches in wherever help is needed. Whether it’s fixing the stage lights, moving set pieces for shows, mopping floors, repairing toilets, cleaning hotel rooms, or fixing car engines for family members, Nick knows how to do it all. Plus he enjoys the variety of work that keeps his job interesting. However, he’s also finishing up an online business degree so he’ll have more skills with which to support his family’s businesses. Does he want to do something else? Not that he’d admit.

Alexis: Why does Nick avoid the spotlight and despise fame?

Candee: Let’s just say that Nick is part of a large family that includes the headline musical act at the theater. He’s spent hours around those singers and has seen what fame can do to a person’s heart, especially when one ends up on the losing side of the comparison game. So, rather than open himself up to rejection and bitterness, he’s chosen to simply stay in the background.

Alexis: What is it about Gloria that fascinates—and irritates—him to no end?

Candee: He pegs her as a pampered Princess on the first day and expects her to act a certain way. But when she doesn’t always act according to his preconceived notions, he can’t help but take a closer look. Sometimes she’s inept. Other times she shows true grit. Who is the real woman? And yet, he’s been around the stage long enough to know how performers can get consumed with their image to exclusion of others. If he gets too close, his heart will get broken when she moves on to another stage and yet he can’t help but get drawn in. And that’s irritating!

Alexis: Is there a special meaning for your book’s title “Sing a New Song?” If so, what can you tell us about it without giving away the story?

Candee: There’s a familiar cliché about someone who “changed their tune” and it is used as a way to describe a person who used to be one way and then changed. Since Gloria is a singer and she certainly needs an attitude adjustment (per everyone who has read the first two books in the series), I felt this title fit her story of transformation perfectly. Not to mention, there’s a verse in Psalm 96 that says to “Sing to the Lord a new song.” Gloria has been singing her own praises for years, but once her heart begins to change, she might finally be able to sing a new song to God too.

Alexis: What do you want readers to remember most about your book?

Candee: I want readers to remember (and embrace) the unfailing love of God the Father. The Audience of One who puts a new song in our hearts. The One who rejoices over us with singing. The One who is always there even when people aren’t.

Candee: I’ve mentioned that Sing a New Song is part of a series. While each title can be read as a standalone book, I’d encourage readers to also pick up Dance Over Me and Focus On Love (with the follow-up novella A Picture Perfect Christmas) to unpack similar lessons about God’s love as found in Zephaniah 3:17. Oh, and I’m currently working on another Christmas novella that will feature one of the singing Sherwoods. 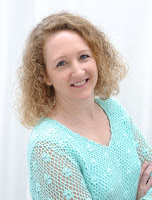 The pampered diva is about to meet her match.

Songbird Gloria Houghton has always needed to be the center of attention, but the spotlight has shifted. Seeking fame and a fresh start, she finds a new stage in Branson, Missouri…only to risk being replaced by a manipulative rival. If Gloria can’t be the star, who is she?

Jack-of-all-trades Nick Sherwood is just one leaf on a vast family tree that includes a restaurant chef, hotel owners, and even the headline act at a family-owned theater. He’s seen how fame can blind a person with jealousy and is more than content to stay in the background thank you very much. If only he wasn’t so fascinated--and irritated--by the newest addition to the staff.

After a disaster of a first impression and financial difficulties land Gloria in the humblest of jobs—with Nick as her boss—it might be time for her to learn to sing a new song.

If you like strong families, country music, and redeemed villains, then you’ll love this next chapter in The Wardrobe series by Candee Fick.

a Rafflecopter giveaway
Posted by Alexis at Tuesday, May 21, 2019