Book Spotlight: Where She Belongs

Today, I'd like to share the delightful details about Johnnie Alexander's latest release, Where She Belongs! Here's the cover photo: 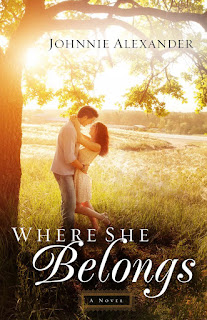 Continue reading this blog post where you will be treated to a review about Where She Belongs, an excerpt from the book, purchase links for the book and notes on how to connect with the author.

~*~
Review written by Kavon and published via Amazon with 5 stars on January 19, 2016, In Kavon's words, Where She Belongs is: That moment when you are happily reading a wonderful story and suddenly what you think is going to happen doesn't and then other things you never even dreamed of start happening instead. You're like -- whoa, wait. Noooooo! And you start waving your arms around like a rabid music conductor as you try get Character A to cool his jets so you can coach Character B to stick with it a bit longer while praying for Character C to just shove off to another book all while trying to hip check secondary characters into an appropriate holding pattern while...Yeah. There were a lot of those moments in this book. All that arm waving and not one single character listened to me. Not even the dog.
Enthralling because I wasn't sure what would happen next. Gut-wrenching because it didn't always go the way I hoped. Dipsy-swoony because when the romance is on it's really, really on! Thud! Heart-stirring because the author explores the power in relationships -- both the past and the present -- and how they shape us. Soul-nourishing because of a solid inspirational thread that anchors it all.Read this one in a day because . . . I. Just. Couldn't. Stop.*Book has been provided courtesy of Baker Publishing Group and Graf-Martin Communications, Inc.

~*~Book blurb: Shelby Kincaid is ready to move on from her grief. With high hopes for the future, she longs to purchase her family’s ancestral homestead so she can raise her young daughters in the only place she ever truly belonged. She plans to transform the abandoned house into the perfect home of her memories. But she’ll have her work cut out for her. AJ Sullivan never wanted the homestead. Inherited as a punishment from his grandfather, it has sat empty for fifteen years and fallen into ruin. He’s glad to finally unload it. But a clean break isn’t possible when he can’t get the young widow Shelby off his mind. Welcome to Misty Willow, a place that will have as great a hold over the reader as it does over its inhabitants.

~*~
Where She Belongs excerpt details from Johnnie Alexander:

Shelby Kincaid’s dream is to raise her daughters in the same house where she spent golden summers with her grandparents. After signing the papers that allows her to do just that, she celebrates by dining at a little Italian café. When AJ Sullivan shows up at her table, she reluctantly invites him to join her. Her happiness overshadows the anger she feels toward him because he let the house fall into ruin.

“I’m sure it was. Once.” AJ bit into the soft, hot bread. Shelby’s green eyes mesmerized him, but her mercurial attitude confounded him. One minute, he felt like her enemy. The next, as if they could be best friends. Maybe even something more. “But the first time I saw it, the house had already been empty several years.”

“It’s kind of large for one person, don’t you think?” He ventured a grin. Thankfully, she nodded agreement.

“You could have rented it out. Made some money.”

He searched for a noble reason why he hadn’t done even that. But the simple truth was that he wanted nothing to do with the house or the memories it embodied. Shelby might be hurt by that truth, but perhaps his explanation would make up for whatever wrongs his family had done to hers.

“Granddad—everyone called him Sully—had several business interests,” he said. “And three heirs. My two cousins and me. I got Misty Willow, and they got everything else.”

She didn’t ask, but he read the question in her eyes. What had you done?

He gave a casual shrug, as if what he’d done wasn’t that big of a deal. Except that it was. He didn’t need to tell Shelby the whole story, though. Only the part that most people knew.

“I’m his namesake. His only son’s only son. Naturally, I was supposed to be a lawyer so I could take care of his legal affairs. But I dropped out of law school and became a teacher instead.”

“So he pretty much disinherited you?”

“Except for your farm, yes.”

“Why the ‘you can’t sell this for ten years’ clause?”

“According to Richard, who’s the trustee, Sully thought I was too headstrong. That I didn’t think before I acted. Forcing me to keep the property was meant to teach me patience.” AJ leaned back in his chair and traced a pattern on the tablecloth. “For all his faults, he was a visionary. The farmland around here becomes more valuable every year. The commute to Columbus isn’t that far. Seems people want to raise their kids in the country.”

“I guess you do. Anyway, what the commuters don’t get, developers will.”

“Nor the rest of the acreage. I kind of like the land the way it is.”

“I wish I could have afforded to lease all of it now.”

“I wish you could have too.” Apparently, the numbers hadn’t worked out for her to lease more than the thirty-two acres. At least that’s what Richard had said. AJ wasn’t sure what difference it made in the long run, though. He gave her an encouraging smile. “But you have first options on the rest, and it’s not going anywhere.”

“I guess that means we’ll be doing business again in the future.”

AJ lifted his glass of tea. “To the future.”

A slow smile brightened Shelby’s features as she clinked her glass against his. “To the future.”

With her perfect timing, Tiff sidled to the table with separate checks and routine questions about to-go boxes. AJ paid both bills then escorted Shelby to her car. The moon hung low on the horizon, and only a few stars gleamed in the night sky.

Shelby clicked the remote to unlock the car. “Thank you for supper.”

“Thanks for letting me sit down.” Stepping in front of her, he opened the door.

“Thank you for the key too. Tell your grandmother it means the world to me.”

Shelby started to get in, then halted, standing so close her delicate fragrance beckoned him even closer. “You’re very close to her, aren’t you?”

“It’s hard. Losing a grandmother.” She stared past him, a faraway look in her clear eyes. “The pain eases, but it never goes away.”

She looked at him a moment, her eyes dark in the dim light of a nearby lamppost, then barely shook her head. “Good night.”

AJ stood on the sidewalk, staring at the taillights as she drove away. When she turned a corner, he jammed his hands in his pockets and strode to his Jeep. He envied her. That’s why he couldn’t stop thinking about her.

He envied her passion for a rundown house. He envied her happy childhood memories. He was even jealous that she had kids.

There had been a time when he thought he could change the dysfunctional Sullivan legacy. Become a respected husband and loving father.

But God couldn’t trust him with a family of his own. Not after the way he’d messed things up.

As he slid into his Jeep, he vowed not to think of Shelby Kincaid’s dazzling eyes or delicate features. Ever again.

A graduate of Rollins College (Orlando) with a Master of Liberal Studies degree, Johnnie treasures family memories, classic movies, road trips, and stacks of books. She lives in the Memphis area with a small herd of alpacas and Rugby, the princely papillon who trees raccoons.
~*~
Buy Johnnie's book:
Amazon, Barnes & Noble and Christian Book Distributors