Love is in the Air: Branding the Wrangler's Heart

“The very first Love Inspired western I have ever read and I LOVED it from page 1 to the end. So well written and interesting. Never a dull or lagging moment. However, I had to ask my husband what a few words meant, such as rimrock and calf fries! Guess I am not as country as I thought I was. I really admired Olivia Hartman, for her spunk in showing those wranglers what a girl was made of … If you do not have this one on order, then you'd better hurry, it is for sure a sellout. I highly recommend it to anyone regardless of the genre you favor.” –R.A. Smith

Those are the words that best describe what readers can expect from author Davalynn Spencer's novel, Branding the Wrangler's Heart.

Davalynn is no stranger to this blog. She's been here more than twice in the past two years and every time, she brings something new and exciting to this place.

Today, we're featuring an excerpt of Davalynn's novel. Read, enjoy and be encouraged to buy this wonderful writer's book! :)

Excerpt from Chapter 1 of Branding the Wrangler's Heart:

Livvy stood at the stove and wiped her hands on her apron. Pop wasn’t his jovial self this morning. She had hoped the men could wheedle him into a better humor, but their good-natured bantering wasn’t breaking through the dour mood he’d carried home from town yesterday.

She stirred the gravy in wide slow circles, listening for Pop’s voice in the dining room. It came low and tense, and she stilled the spoon to concentrate on his words.

“I’m sure you all know about the feuding that’s been going on over the railway the last couple of years.”

Knives and forks scraped against her grandmother’s Staffordshire china, and a coffee cup clinked on its saucer. No one spoke, and she imagined the others nodding somberly.

“I don’t want my men getting mixed up in any rail war.” Pop’s voice carried an edge. “This blasted railroad business is going to get someone killed and it better not be any of you.”

A throat cleared. Whit, she guessed, who usually spoke for all the hired hands.

“We’re too busy,” Whit said. “Gathering starts today and I figure we’ll be branding for three or four days. We don’t have the time or notion to be riding up that canyon taking potshots at our neighbors.”

Pop cursed and Livvy clapped a hand over her mouth.

“That’s the problem,” he said. “Those train barons have called in outside guns and they’re offering money to any man that will sign on with them.”

The heavy silence meant Pop was staring a hole through young Jody, the only one foolish enough to ask such a question.

“Not that I’m thinkin’ on joining them, mind you. I was just curious, that’s all.”

A cup slammed into its saucer and Livvy flinched. She had only eight of the original twelve left, and the way Pop and these cowhands treated her grandmother’s lovely blue-and-white china, she’d have no unchipped cups by summer’s end. Tin suited them better, but at the dining table Pop insisted on the “good dishes.” A tribute to his beloved Ruthie.

Chair legs combed the carpet as someone stood.

“You can count on us,” Whit said. “We work for this outfit, not some railroad company.”

Buck and Jody quickly agreed and flatware clattered against plates.

Livvy hurried to the sink, filled a dishpan and set it on the stove, grateful again that her grandfather had the convenience of an indoor hand pump.

Pop and the boys made their way through the kitchen, thanking her as always. Whit went out the front. She checked the other water pan already on the stove and returned to the dining room to clear the table. Through the lace curtain she saw Whit at the hitching rail, adjusting Oro’s cinch. She moved to the window to watch him—something she did too often of late. Comfortable in the knowledge that he couldn’t see her through the lacework, she wrapped her arms around her waist and studied his profile.

Dark and angular, his jaw shadowed with stubble. He was still lean but no longer the gangly boy who’d chased her in the churchyard. So different, yet so much the same as he had been during those growing-up years.

How did he see her now? As the skinny little girl who’d begged him to push her in the swing and cried when he teased her? Or as a woman who had lost that child’s heart to hero worship years ago?

He looked at the window. Livvy sucked in her breath and tightened her arms. She held her place, afraid to move and give herself away. A slow, easy smile tipped his mouth and he nodded once. Then he gathered the reins, swung into the saddle, and touched his hat brim before riding away.

Her vision darkened and she swayed. Reaching for a ladder-back chair, she gasped for air, her temples throbbing. This had to stop. She couldn’t spend all summer holding her breath every time Whit Hutton looked at her.

She finished clearing the table, set a small leftover steak on the sideboard, and covered it with a napkin. Then she carefully placed the china in the dishpan and checked through the kitchen window for the men’s whereabouts. Satisfied they were busy elsewhere, she grabbed a sharp knife and went out the front door.

An overgrown lilac bush billowed with deep purple blooms beside the dining room window. Carefully she cut three bunches and held them to her nose as she walked to the hitching rail. Glancing at the barn and bunkhouse, she turned to face the window. The lace curtains blocked her view of the chair where she had stood. Convinced that Whit could not have seen her through the sheer fabric, she went inside to search for a vase among her grandmother’s collection.

The heavy oak door opened right into the dining room with no formal entry hall. The ranch house had grown out each end of the original square-log cabin, spreading into a comfortable home. A small porch announced the entrance, but Mama Ruth had never bemoaned the informality. She had directed her British ancestral conventions to more important things.

The Bar-HB might be a working cattle ranch, but Ruth Baker had swept a generous hand through her house where furniture and carpets, crystal and china were concerned. Livvy chose a lovely hand-painted vase from an ornate curio cabinet. She fussed with the heady blooms, slicing off the bottom of one bunch so its heart-shaped leaves cupped over the vase’s lip. Several four-point blossoms dropped to the tablecloth and the rich perfume filled the room.

Mama Ruth had loved lilacs, and every window in the rambling house had a bush nearby that bloomed profusely from late spring into early summer—gentle lavender, brilliant white or deep purple. Even the dainty detail that edged the vase replicated the delicate blooms.

Livvy removed the soiled cloth to reveal the fine cherry wood table and stepped back to view the lilacs.

Whit could not possibly have seen her. So why did he act as if he knew she was there? How full of himself he was, assuming she stood at the window. That arrogant air had not changed one bit since their childhood.

She glanced down at the simple bodice of her blue calico and the full white apron that covered her skirt. Had it shown through the curtain?

Or had he felt her eyes on him? 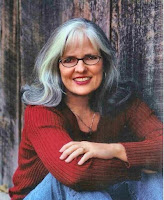 Davalynn Spencer writes inspirational Western romance, historical and contemporary, complete with rugged cowboys, their challenges, and their loves. Her work has finaled for the Inspirational Reader's Choice Award, the Selah, and the Holt Medallion.

Davalynn teaches writing at Pueblo Community College and at various writing workshops. She and her own handsome cowboy make their home on Colorado’s Front Range with a Queensland heeler named Blue.