Perhaps today's featured true love story is best summarized by a quote from the writer who is well, a professional writer!

"I met her in 2005/Two years passed, she learned I was alive/Fast forward some years...just about seven/Together blissful, it’s been like heaven."
~Zay Garza

Read on for the story of how God sent "Cupid's arrow" as Zay calls it, straight into the hearts of Louri and Zay, transforming the friends into lovers with an affection that led to marriage and their own happily ever after.

Of course the summation in our attached description is to be simple, poetic and fun, but our tale as a couple begins because of my old inoperable BlackBerry and a reliable addiction to Facebook in February 2010.

I was five weeks liberated from a previous relationship, while Louri hoped for new love but constantly drafted lists of bad dates and incompatibles.

Since my youth, I have always desired to romantically love someone and feel that reciprocation, but my life was without such luck that I was always wanting.

For weeks, I attempted to organize a date with a woman that I was interested in, but each time, I was without luck. I did not know what to do because I did not want to spend this day alone.

Logging onto Facebook, I checked all of my notifications comments of my current status update. I scrolled down my page and saw a recent thread between me and my friend about her most recent poor dating experiences. Her name was Louri Aaron.

After I finished reading our conversation, I remember hearing of people in stories spend time with friends on Hallmark’s day of love.

Not wanting to appear creepy, I became increasingly uncomfortable for some reason. I reached for my BlackBerry to offer the invitation for a simple night between friends. Yet as fate would have it, my phone immediately rebooted itself and once it returned to its normal position, her contact information was removed.

After praying to God I would be viewed pleasantly, I sent what now I know to be my last invite to a woman for a first date (though this was not intended to be a date), through Facebook.

I invited her to join me at the Busboys and Poets restaurant at the corner of 14th and V street Northwest, Washington, D.C.. Plagued by the remnants of Snowmageddon, I suggested we take the Metro because parking would be difficult. At arrival, I found Louri in the restaurant’s bookstore studying the newest available book-spines. As our eyes met, we friendly embraced, and allowed the hosting staff to escort us to our seat. Sitting next to each other on the restaurant’s lounge-inspired couches, it immediately dawned on us that we had not once spent time alone, outside of our group of friends.


Surrounded by Cupid’s spell, we jovially joked at how all previous Valentines days were wretched and unromantic. While John Legend, Jill Scott, and Corinne Bailey Rae chorused us through the speaker system, our food arrived, matching a smell to the emotional peace on this couch. And yes, I even remember her meal, the Spinach Pesto Lasagna.

Laughing and talking about politics and comic book characters, we quickly deduced that the wait staff became irritated by our inaction after our meals were completed, but we cared nothing for their inconvenience. We were caught in pure comfort and embraced this new enjoyment we found in each other, just friends.

Glancing at the clocks on our phones, we both realized we each had a BlackBerry and exchanged mobile numbers and individual BBM (BlackBerry Messenger) contacts, preparing ourselves to leave because we had work the next morning.

Nearing eleven that evening, I decided I did not want her traveling alone on the train.

Looking over to her, I suggested, “Why don’t you ride with me to my house in the city and I can give you a ride to your car?” Knowing she’d refuse and I would have to pressure the issue further, I prepared a verbal parry, but to my surprise she said, “Okay.”

From the U Street Corridor to Capitol Hill, we exited the Potomac Avenue Metro train station. To me, this was a neighborhood I’ve known my whole life, but to her, she was seeing it for the first time. Covered in snow and ice mounds everywhere, we walked cautiously.

Reaching to help her down the ice mound, I was immediately overwhelmed, as when our hands touched, God unleashed the Cupid arrow and a shock of electricity moved throughout our bodies, moving us from “just friends” to “husband and wife” on May 25, 2014. 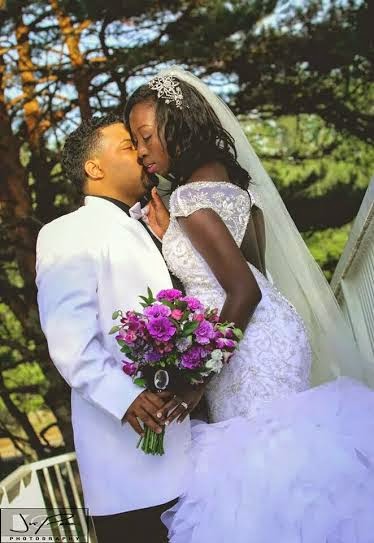 ~*~
Author bio: Juan-Jose “Zay” D. Garza and Louri “Lo” K. Aaron-Garza have been married since May 25, 2014. The both were raised in Christian homes and both have personally accepted Jesus Christ as Lord and Savior of their lives. Christ is the center of their relationship. They are both members of the Seventh-day Adventist Church denomination. They live in the Washington Metropolitan Area.