Meet Brandy Bruce. She is an author and editor of books, wife to a man named Jeff, and mom to their three adorable children. She loves dessert, especially cheesecake. 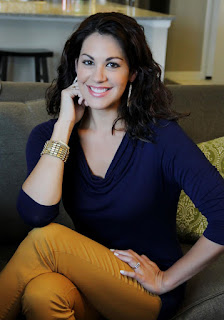 Brandy's been our guest before but today, she's here to share an excerpt from her newest novel, The Last Summer! It's a great story. Read my review of her book then enjoy the story excerpt! :) 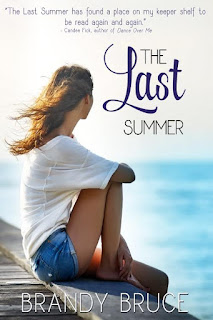 Author Brandy Bruce shares her Contemporary Romance fictional story about a circle of friends who support each other like family and hold each other’s hearts.

The Last Summer is the title of her story and it’s a winner! Readers will find the supportive friendship of these main characters to be something that most people desire in real-life.

The story focuses on Sara Witherspoon and her longtime crush Luke. The author does a great job of keeping the focus while also giving the reader time with each of the friends in Sara and Luke’s circle. She does an amazing job of keeping the secondary characters’ subplots in line with the overall plot without confusing the reader, which can happen when an author has more than four main characters. There are seven friends in this story.

The reader is invited to go with Sara and her friends to their lake house summer getaway, engage in the wedding planning, and eat meals with the characters and their families. It is a delightful experience that makes the reader feel like they are in the story with the characters.

This story is about a summer that changes everything. One of their friends is getting married. Another already married announces that she is pregnant. Sara discovers a secret that her parents kept from her, and she struggles to deal with the heartbreak of watching her best friend Luke date Debra.

A handsome pilot from North Carolina enters the story and begins to woo Sara’s heart and for a while, it works. But then there’s Luke who she’s loved from day one, which makes Sara more distressed and confused.

As the story progresses, the plot thickens and this close circle of seven friends finds their bond being tested as they’re faced with a common struggle: Does growing older and making life changes mean that they will grow apart?

The Last Summer is an engaging story filled with likable characters, memorable moments, situations that are true to real life, and a lot of heart.

*The author provided Alexis A. Goring with an ARC of her book in exchange for an honest review.

Excerpt from Chapter Two of The Last Summer by Brandy Bruce:
Addison slid on her sunglasses. “Can you believe this heat?”
I dug through my purse for my own sunglasses. “After a lifetime spent in Texas, unfortunately, yes, I can believe it. Where ARE my sunglasses? Grrr! And I just realized I forgot sunscreen. Someone better have some.” I shook my purse.
Addison tsk-tsked. “How many Diet DPs have you had this morning?”
My addiction: Diet Dr Pepper. The gang liked to tease me about it. As if drinking Dr Pepper in Texas was a novelty. Sure, I might drink more soda than most—but we all have our vices. Thankfully, I’ve managed to keep my unnatural-for-anyone-older-than-ten-years-old appreciation for cherry Fruit Roll-Ups a secret to this point.
“What about Yoda?” Addison asked.
“She’ll be fine. She’ll have complete run of the place for two days and she’ll love that. I’ll come home to so much fur everywhere that you’d think I lived with a gorilla.” I found my sunglasses and calmed down, then sweet-talked Addison into pulling through a McDonald’s drive-through so I could get a large Diet DP. It was Addison’s fault really. She’d brought it up and then I realized I’d forgotten to bring one for the road.
Summer in Texas was brutal. And even in early June . . . well, you learned to get used to it. The temperature on the car dial read 95 degrees. We chit-chatted as we drove through the city; once we passed the Houston city limits, I turned down the radio.
“So tell me how things are with Glen,” I told Addison, speaking of her boyfriend of the past nine months. She’d met the African-American youth pastor from a nearby Bible church at a leadership conference.
“Good. I adore him,” Addison said.
“Well, what’s not to adore?” I said, thinking of Addison’s attractive, outgoing, crazy-smart but kind-of-obsessed-with-bike-riding boyfriend, and Addison smiled.
“So true.”
“Are you doing that bike marathon with him this summer?” I asked and worked hard to keep my lips in a line to keep from laughing at the immediate frown on Addison’s face.
“Hmm. I don’t know. Probably. It’s kind of a long marathon and I’m not really . . . but, yeah, I mean, if I buy a new bike seat . . .” her thoughts trailed off.
“Are you in love with Glenn?” I asked.
“Without a doubt. I’m one hundred percent in love with that man,” she sighed a happy sigh, all thoughts of bike-riding having vanished.
“How do you know?” I wondered.
“When it’s love, Sara, you know.” She gave me a sideways glance and her demeanor shifted again.
“How’s Luke doing?”
It wasn’t strange that she asked me. Everyone in our group knew that Luke and I were close.
“You know, he called me earlier, sounding a little distracted, saying we need to talk. Probably a work issue. Other than that, I think he’s fine. He has a lot of pressure on him at his job. That promotion last year has been a mixed blessing. More money, way more responsibility. Still, he’s so capable,” I felt like I was rambling. The conversation with him earlier kept flashing back.
“Like you,” Addison said, turning on her blinker and switching lanes.
“What?” I asked, my mind on that phone call.
“Capable like you,” Addison said again. “It’s like you two are the same person, Sara. You know that. We all know that. You finish each other’s sentences. It’s almost creepy how similar you and Luke are.”
“It’s not creepy!” I protested. But she was right. My friendship with Luke had started slow; conversations that ran long after hanging out with friends, running errands together because we always seem to take the same approach about shopping, about getting things done. Our taste in restaurants, entertainment, our views on spirituality—everything clicked. Eventually we just started spending more and more time together because our friendship was so easy.
Easy.
Easy for him.
“Do you think it’s hard for girls and guys to be friends?” I asked Addison. From her side profile, I watched her nod.
“Yes. But it’s possible. Look at the seven of us. Our friendship is . . . “
“Unique,” I answered after a moment.
“Right,” she agreed, checking her blind spot before switching lanes again. “You and Jason are friends, and I was afraid you wouldn’t be after you two broke up.”
“I was afraid of that, too. I’m incredibly thankful we’ve managed to stay friends, great friends. And Luke—well, Luke and I are BFFs and he isn’t even a girl.”
Addison chuckled.
“He’s your match, I guess,” she said. I didn’t answer. The words swirled in my head. For some reason, they didn’t land, they just kept swirling.
“Could you tell from the beginning?” I asked. “Was that why you wanted me in the group, Addison? Because Luke and I were so much alike?”
Addison turned off the freeway. She shook her head without looking at me.
“Oh no, Sara. It was because of how Jason looked at you from the moment you walked in the room that day. I thought you were Jason’s match.”

~*~
Author Bio: Brandy Bruce is a mom, a wife, a book editor, an author, and someone who really loves dessert. She’s the author of the novels Looks Like Love, The Romano Family Collection, and The Last Summer (June 2017 release). Brandy, her husband, and their children make their home in Colorado.