Welcome Kimberly Rose Johnson to the blog today! She's here to talk about her new novel, A Love Song for Kayla.

Look at the cover of her book. Isn't it pretty? 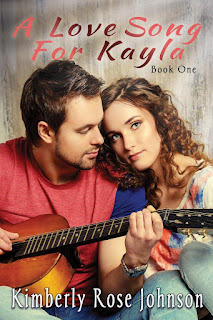 Here's the blurb for Kimberly's book:

When two strangers cross paths their lives are forever altered.

Ever since she was sixteen Kayla Russell has dreamed of her perfect man. She even went so far as to make a list of desired qualities. The list has proven to be a bust since no man is that perfect, at least until she meets Derek. But will his secrets come between them and destroy what could have been something wonderful?

When music superstar Derek Parker comes to small town Oregon to escape the paparazzi he goes incognito as a deliveryman. He wants to leave his old life behind, but it proves to be harder than he realized when his past finds him. Now the woman he has come to care for feels deceived and no longer wants anything to do with him.

Formerly published under the title A Valentine for Kayla.

Alexis: What inspired the title for your story, A Love Song for Kayla?


Kimberly: Music plays a strong role in the story, and let’s just say that Derek is a composer as well as a singer.

Alexis: Tell us about your story’s heroine Kayla Russell. What is her dream? What in her life prevents that dream from coming true?

Kimberly: Professionally, Kayla is doing well, but on a personal level she has yet to find the man of her dreams, which has caused her to grow discontent with her life.

Alexis: What inspired Kayla to make a list of desired qualities that she believes compose her dream man?

Kimberly: When she was a teenager a series of bad experiences with guys made her decide she needed a list of qualities a man would have to have for her to consider going out with him.

Alexis: What age is Kayla when the story starts? What are her thoughts about that list now that she’s older and has not yet met her “dream” man?

Kimberly: I don’t think I ever state exactly how old Kayla is. In my mind though she is in her middle twenties. She feels hopeless about finding Mr. Right and has already crossed a couple of her original qualities off the list.

Alexis: Tell us about your story’s hero Derek Parker. What makes him “perfect” to Kayla? Share the hope in his heart and his character flaws.

Kimberly: Derek, loves the Lord, is good looking, and he can sing. Derek is attempting to leave his past behind because he doesn’t like the person he has become. He wants to simplify his life and believes he will be able to do so a thousand miles away from his old life.

Alexis: Can you give us a clue about the secrets that Derek is keeping? If revealed, in what ways will his secrets affect his relationship with Kayla?

Kimberly: My lips are sealed. It will have a drastic affect on his relationship with Kayla.

Alexis: Let’s not forget the fact that Derek is a music superstar! Awesome! What were the challenges and joys in researching and writing his character?

Kimberly: I tossed around making him a jazz signer for a while, but then decided to go more mainstream. However, I didn’t go heavily into that part of his character. It’s more about who he is now.

Alexis: Why does Derek go undercover as a deliveryman? What is it about his “old life” that he is trying to escape?

Kimberly: Derek wants to be treated like a normal guy, and he wants to be liked for himself, not his celebrity. He’s tired of pretending to be something he’s not and wants a more simple life.

Alexis: Why did you set this story in Oregon and not elsewhere?

Kimberly: I set all my books in the Pacific Northwest. I live in Oregon and thought it was about time I set one here. This book was originally my fifth book ever published, and up to that point all my books had taken place in Washington State.

Alexis: What was the most fun scene in this book for you to write? Why?

Kimberly: I love the opening. I can actually remember writing it as it reflected how I felt on that day—Valentine’s Day. I also really enjoyed the final scene. There was a lot of tension in the one. I don’t want to give it away, so that’s all I will say.

Alexis: How did your personal taste in music affect your storytelling?

Kimberly: I don’t think it did actually. I don’t listen to the kind of music Derek performed. I prefer contemporary Christian music and seldom listen to secular music.

Alexis: What food or beverage could you not live without as you wrote this story?

Kimberly: Oh my, I don’t remember. But right now dark chocolate is my biggest vice.

Kimberly: I think the story will speak to each person differently, depending on his or her life story. For me, it was letting go and trusting the Lord.

Kimberly: This book was originally published as A Valentine for Kayla. It’s one of my favorite stories I’ve written because I can relate with Kayla. Thanks for hosting me, Alexis! This was fun.

Kimberly Rose Johnson married her college sweetheart and lives in the Pacific Northwest. From a young child Kimberly has been an avid reader. That love of reading fostered a creative mind and led to her passion for writing.

She especially loves romance and writes contemporary romance that warms the heart and feeds the soul.

Kimberly holds a degree in Behavioral Science from Northwest University in Kirkland, Washington. She is a member of American Christian Fiction Writers.