Interview with Candee Fick, author of Dance Over Me

Please welcome Candee Fick to the blog today! Candee is the author of Catch of a Lifetime which is available now.

Today, she's here to talk about her new novel, Dance Over Me, which is releasing today AND she's giving away one e-book copy of her book, for your Kindle! Enter the book giveaway contest by filling out the Rafflecopter widget below. Then proceed to read the interview with this super talented author! :)

Alexis: Danielle Lefontaine is a strong, unique and powerful name. How did you think of it? Tell us about the woman behind the name. What does she look like? What are her flaws? Her strengths?

Candee: I picked this name for my character for the strength and bit of elegance it implies, but also because it contrasts with her birth name (and nickname) of Dani Barker. She’s a survivor with a persistent streak to find and be reunited with her baby brother, but after her experiences in foster care, she’s also afraid to rock the boat. When bullied, Dani won’t stand up for herself because she still doesn’t want to get pegged as the troublemaker and find herself looking for a new home. Yet, despite her longing for a place to belong, Dani’s an extremely talented dancer and singer. Her talent makes her stand out in the crowd while her straight brown hair and brown eyes help her blend in.

Alexis: Danielle seems like a captivating character. Describe the research that you did to write this book. Did you visit New York and watch a show on Broadway?

Candee: Since her birth mom’s favorite song was “The Lullaby of Broadway,” Dani always felt a pull toward that direction that was solidified once she started dance lessons. However, she’s never been to New York or Broadway…and neither have I. Yet many of the plays performed on local stages were once on Broadway so I found it an interesting twist to bring the big stage to the local setting. There are two plays performed during the time period of Dance Over Me and I watched both of them in person at a local dinner theater in addition to countless YouTube videos and a looping soundtrack in the background when writing.

Alexis: What role does Danielle’s long-lost brother play in this story? What’s the significance?

Candee: Her long-lost brother is a symbol of sorts of her longing to belong somewhere. She once had a happy, loving family and yearns to regain that emotional stability and connection again. So while she’s looking for her brother, she’s also discovering that ideal stability and connection in her personal relationship with God and then with the hero and his family. Often the very thing we think will fill the gaping hole in our heart or bring satisfaction doesn’t. Dani also feels a sense of unfinished business since she had promised her dad to always look out for her brother but circumstances made it impossible to do that. She’ll need to trust that God has been watching over them all along and working behind the scenes.

Alexis: What is it about Danielle that makes a cast member jealous?

Candee: Did I mention that Dani’s got talent? Well, during the audition, the company diva’s boyfriend not only complimented Dani on her fancy footwork but seemed to flirt with her while reading dialogue from a scene. The diva not only feels her position as star could be threatened but makes it a personal mission to keep the boyfriend’s attention. But remember, Dani doesn’t like to rock the boat and wants to fade into the background…which could make it seem like she’s hiding something.

Alexis: The hero in your story is Alex Sheridan, also a strong name! What was your inspiration behind creating this character? What’s he like personality-wise? Briefly detail his strengths, weaknesses, and character flaws.

Candee: Alex represents stability with a solid family around him as well the family-owned business where he gets to use his musical talent and marketing education. He’s got a fun sense of humor, dimples, a lock of hair that keeps falling over his forehead, and an unwavering dedication to those he loves. He’s living his dream and now wants someone to share it with. Perfect, right? Except that he’s afraid to take a risk with his heart. He’s torn between wanting a life partner who loves the theater and fearing that the bright lights of the stage will steal her away. Mostly because he can’t imagine ever leaving home.

Alexis: Where is the dinner theater that Alex helps his family run, located? Why did you as the author, choose that kind of backdrop?

Candee: Like I mentioned before, a dinner theater was a fun way to bring a taste of the big stage of Broadway to a smaller town setting. It’s almost a juxtaposition between our big dreams of glory and our need for a safe place of security. This particular fictional theater is located in Fort Collins, Colorado about an hour north of Denver and is loosely based on a compilation of three semi-local dinner theaters. While I wanted the freedom to invent my own layout of the facility for the story purposes, I also wanted to create a place where other theater-goers from other states could feel at home.

Alexis: What is it about Danielle that captivates Alex?

Candee: Alex recognizes talent and a similar sense of humor, but is captivated when he catches a glimpse of Dani’s heart for God on the day he arrives early for a rehearsal. In that moment, he realizes that she performs for the love of the dance and to use God’s gifts rather than a desire for fame or notoriety. There is nothing more beautiful than humility and Alex knows he’s found the other half of his heart.

Alexis: What is it about Alex that makes Danielle’s care about him?

Candee: While her first impression is that he’s cute…and tall, she’s also skittish because he is the Director’s son and she doesn’t want it to appear to others (like the already-jealous diva) that she’s trying to get on the Director’s good side through his family. However, as Dani spends more time bantering with Alex during rehearsals and she sees him interact with his grandmother and cousin, the fear fades. And then she catches a glimpse of his faith in God which seals the deal. Alex is the total package.

Alexis: Why does the glamour of the stage captivate Danielle’s heart? How did show business become her passion?

Candee: The first seed was planted by her birth mom singing about Broadway and then nurtured through learning to dance. But show business became her passion in high school during a drama class when she first stepped into the life of someone else on stage. After foster care and years of trying to find a place to belong, it was refreshing to walk in someone else’s shoes for a change. She found her niche in musical theater because she could also use her love for music and dance. She also loves the way she can help audience members leave behind their own cares for a few hours during a show.

Alexis: What were the most challenging aspects of writing this book? And what was the most rewarding?

Candee: The most challenging part was making the tap dance parts seem real since I haven’t received any formal training in dance. However, I had been part of several shows including large-scale Passion Plays so I drew on that theater experience to bridge the gaps. The most fun part of writing this book was the banter between Dani and Alex because those two could really get going faster than my fingers could fly. But the most rewarding part was weaving in Dani’s faith journey and the realization that God was her true stability and had been working behind the scenes of her life.

Alexis: What do you want readers to remember about Dance Over Me?

Candee: The title came from a song, “Amazed,” by Phillips Craig and Dean that mentions how God dances over us while we are unaware and goes on to say how amazed we are at God’s love. I want readers to feel a similar amazement at how God works behind the scenes in our lives and to recapture that sense of awe at the depth of His love as illustrated by Dani’s story and her relationship with Alex.

Alexis: Thanks for the interview, Candee! Any closing thoughts?

Candee: Thanks for having me today! It’s been a lot of fun talking about Dani’s journey. The good news is that there’s more to come from The Wardrobe Dinner Theatre. I’m working on the sequel right now and already plotting how to redeem the diva in book three. Folks can sign up for my newsletter at www.CandeeFick.com and get updates about future books.

Candee Fick is the wife of a high school football coach and the mother of three children, including a daughter with a rare genetic syndrome. When not busy with her day job or writing, she can be found cheering on the home team at football, basketball, baseball, and Special Olympics games. In what little free time remains, she enjoys exploring the great Colorado outdoors, indulging in dark chocolate, and savoring happily-ever-after endings through a good book. 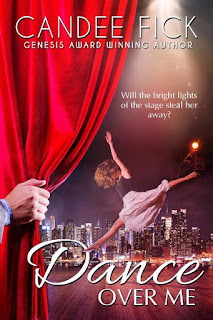 ~*~
Book blurb:
Danielle Lefontaine, a fledgling actress raised to the lullaby of Broadway, searches for her long-lost brother and her place on the stage, but a jealous cast member and numerous fruitless leads threaten to drop the curtain on her dreams and shine a spotlight on her longing for a place to belong. Meanwhile, Alex Sheridan is living his dream except for someone to share it with. When Dani dances into his life, he hopes he’s found the missing piece to his heart but fears the bright lights of a bigger stage could steal her away. Will the rhythm of dancing feet usher in their deepest desires or leave them stranded in the wings?