Words of Faith: Jane's story about preparing for battle

Battle Preparation
A Words of Faith story by Jane Kirkpatrick

Prepare for the battle. At the end of my prayer time in late 1985, I asked as I always did, “Do you have anything to say to me?” Sometime a name came to mind and I’d call or send that person a card. Often a melody or lyric brushed my day. Once, a butterfly landed on my knee as a reminder that God was with me. But Prepare for the battle? I’m pretty suggestible (we writers have active imaginations) so I don’t even read about new diseases for fear I’ll develop the symptoms. I asked my prayer question several times in the weeks ahead and the phrase remained: Prepare for the battle.

My husband and I had just left our jobs (he a builder, me a mental health director) and moved to a remote piece of 160 acres of rattlesnake and rocks in Oregon along a wild and scenic river. We’d stepped out on a cloud of faith, believing we wouldn’t fall through. But it hadn’t been easy homesteading: acquiring electricity, harnessing a spring, building a house, even digging a phone line seven miles, twice because it didn’t work the first time. We lived seven miles from our mailbox and eleven miles from a paved road. I hadn’t seen those challenges as battles.

How does one prepare for a battle of uncertainty? Put on the “full armor of God” (Ephesians 6:10-20). I reviewed my prayer journal noting all the times I’d been worried or made requests and how God had provided. I spent more time in scripture. Psalms 66:12 says “…you brought us to a place of abundance.” That felt reassuring. I read biographies of people of great faith and spent time in Hebrews 11 with the stories of Noah, Abraham, Sara and beyond. They didn’t all receive the promise in this lifetime the scripture says but God is faithful and they were blessed.

Life went on over the next months. We had a flood that messed up fences we’d just put in. Equipment broke down. A favorite dog died. I commuted to a job that took me away three days a week. Still no battle.

Then on a brisk day in March of 1986 my husband and I flew our small plane with an instructor for required biannual reviews. Our friends who had helped put in the phone line flew with us. Nancy was seven and a half months pregnant. All went well until we began our descent close to home to an uphill airstrip over a cluster of trees and a town. I said to Nancy, “We could lose an engine here and be fine because we’re so close to the end of the runway.” In that instant, the wind sounds changed. We began to float toward fir trees. “Jerry, the trees?” I said. Then I heard the sound of locust branches scraping the bottom of the plane. I still thought we’d make it -- I could hear the engine humming -- when the wing clipped a spruce tree and we pitched forward. We were going down into power lines and houses.

I saw a white light and thought, “So this is how it ends.” I felt calm; worried only over my husband and friends. I didn’t even pray.

We crashed in the street. I felt a thousand beestings all at once over my foot and the shattering of bones in my arm that had plunged into the instrument panel. Nancy’s husband shouted her name. She gagged a response. I looked at the bloody face of my husband and knew this was the battle.

But God had prepared us. We had surgeries, months of recovery with Jerry’s broken ankles, hips, sprained wrists, facial cuts; my shattered foot and arm. But God brought abundance. My parents came to take care of us. Nancy delivered a full term baby girl. Ken wasn’t hurt at all.

I could pray for others during this time, but not for myself. I think I was angry that if God could prepare me for a battle, why didn’t God stop the fight? Then one day I read in 2 Chronicles 20:15: "Do not be afraid or discouraged… For the battle is not yours, but God's." Ah, sweet peace.

When I sometimes begin to feel separated from God, fatigued by life’s battles, worried over what is or what might be, I remember that time. Theologian Paul Tillich reminds us that in life we must come to terms with three things: that we are mortal, that we control nothing, and that life is uncertain. I still ask my question; but I rest knowing that God goes before, during and after the battle and gives me peace. 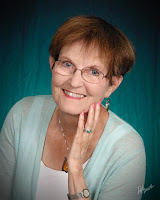 Jane Kirkpatrick is the author of 31 books including 26 novels based on the lives of actual pioneer women. This Road We Traveled (Revell, September) received a starred review in Publisher’s Weekly, concluding with “This is more than one woman’s story of courage and faith; it is the story of a family that journeys, grows, and heals together. Kirkpatrick’s vivid, rich prose will keep readers in awe and on the edges of their seats.”

Jane has won the following awards: Carol Award, USA Best Books Award, WILLA Literary Award and the Wrangler Award. She is a two-time finalist for The Christy Awards and the Oregon Book Award for fiction. Portions of this “Prepare for the Battle” story were published in her memoir Homestead (Whitaker). Jane lives with her husband of 40 years and two dogs in Central Oregon.