Words of Faith: Gary's story about God as a refuge in times of trouble

A Words of Faith story written by Gary Breezeel

Some years ago, I moved my family hundreds of miles to take a new job. One day, only four months later, my boss called me into his office and told me he had to let me go. I went numb all over, my limbs like rubber. How could this have happened? He’d made no complaints about my work, and we got along well.

At least, he gave me a month’s notice.

When I regained sufficient strength, I got up, told the secretary I was leaving, and escaped. I had no particular destination in mind, knowing only that I had to get away.

I sat in the car for a few minutes, head spinning, before I remembered a tranquil spot near the Mississippi River. Only God’s grace kept me and other motorists safe as I negotiated crowded city streets and winding country roads en route to my destination.

Filled with rage, I parked not far from the river. It’s not fair. How could he do it? After all my excellent work?

After a few moments, I exited and followed a path a short distance down an embankment and stepped up onto a mammoth boulder, which extended out into the channel.

The muddy water swirled and eddied below me as the current raced swiftly past. For hours, I gazed both upstream and down. The size and power of the mighty torrent and the quiet roar as it rushed by took my focus off my troubles. The gentle breeze tickled my face. I scanned the azure sky.

Standing on that rock, I recognized some measure of the vastness of the universe. There in the midst of God’s magnificent creation, I poured out my heart to Him. Why? How could you let this happen? What now? I’m my family’s sole support. How can we survive?

Over the next few hours, I asked like questions repeatedly. At length, I received an answer to the question I should have asked. I began to comprehend how small and weak I was when compared with the size and power of that river. Yet, the universe made even the Mighty Mississippi seem minuscule.

Even more importantly, the Lord reminded me that He made all of creation, including me. With His help, I remembered that He loves me, that He wants only good for me, and that He promised to provide for me.

I went home with renewed hope and peace in my heart, knowing I could face an uncertain future because my God remained in control, and He would provide for me. No, I did not expect God to hand me another job. I knew I would have to send out resumes and make calls, but I could leave the results, and the worrying, up to Him. And I did. For the most part.

I would like to say that I completely avoided worry over the next few weeks, but, too many times, I picked that burden back up myself. Yet, whenever worry threatened to get ahold of me, I returned to my special place. There, as the waters surged by, I felt His presence in a special way. I experienced him in the vastness of the sky, the fresh, misty scent of the river, and the breeze rustling through the trees.

The enormity of His creation reminded me again and again of his power and that He reigns. He spoke to me through those things, renewing my trust in Him. But, mostly, I poured out my heart, knowing He heard me. In so doing, I gained the strength and courage to persevere through adversity without losing heart.

Over the next month, I spent countless hours by the river in prayer and meditation, as I experienced the wonder of God’s power and grace through various aspects of his creation. I felt closer to Him than ever before. Each time I visited my refuge, my troubled heart found peace. Moreover, God came through for me. After missing only five days of work, I found another job. What a Blessing! What a God!


Because of the Lord’s great love, we are not consumed, for his compassions never fail. They are new every morning; Great is your faithfulness.
~Lamentations 3:22-23

~*~
Author bio: Gary L. Breezeel is a former attorney, minister, and government accountant. Throughout all those various career changes, he dreamed of being a writer when he grew up. Finally, upon retirement from his position with the U. S. Department of Defense, he fulfilled his dream. Gary moved to Arkansas in 2010 with his wife of more than forty years to be closer to his grandchildren. In addition to his writing, he fills his days with reading, feeding his television addiction, touring Arkansas, and attending sports and other activities involving his grandchildren. 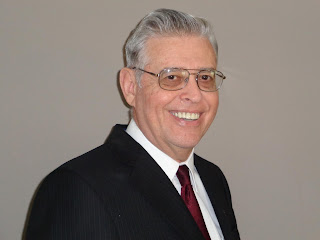 Gary is a member of American Christian Fiction Writers. His short stories, essays, memoirs, and poems have won numerous contests. One recurring theme in his work is baseball. He is a lifelong fan and several of his stories have a baseball setting. Gary has completed a draft of his first novel and is making slow progress toward getting it ready for publication.

His only publication of note is “A Comedy of Errors” in Christmas Moments, Grace Publishing, 2014.
Posted by Alexis at Friday, May 20, 2016