Who leaves the comfort of their home and takes their spouse on a spontaneous journey around the world and calls the entire experience A Year of Living Prayerfully?

Jared Brock, author of A Year of Living Prayerfully, took his wife Melissa on the journey of a lifetime. It was a trip around the world with stops in spiritual meccas like Italy, Spain, England and visiting the world's biggest church in Seoul, South Korea. The purpose of the trip was for Brock to learn 1) if prayer really works and (2) how he can become more effective in prayer.

I must admit, when I first received this book from Tyndale Publishers, I thought maybe I should have selected a different book to read. It simply did not at first glance, look like a book I would enjoy reading. But as I opened the book and my journey began, I was so glad that I did not let my first judgment of the book's cover and summary deter me from starting to read the book. And when I started, I couldn't stop reading it until I reached the very last page!

So without further ado, why don't you continue reading this blog post? Discover why as you read my review of Brock's book, this read is worth your time and your thought. 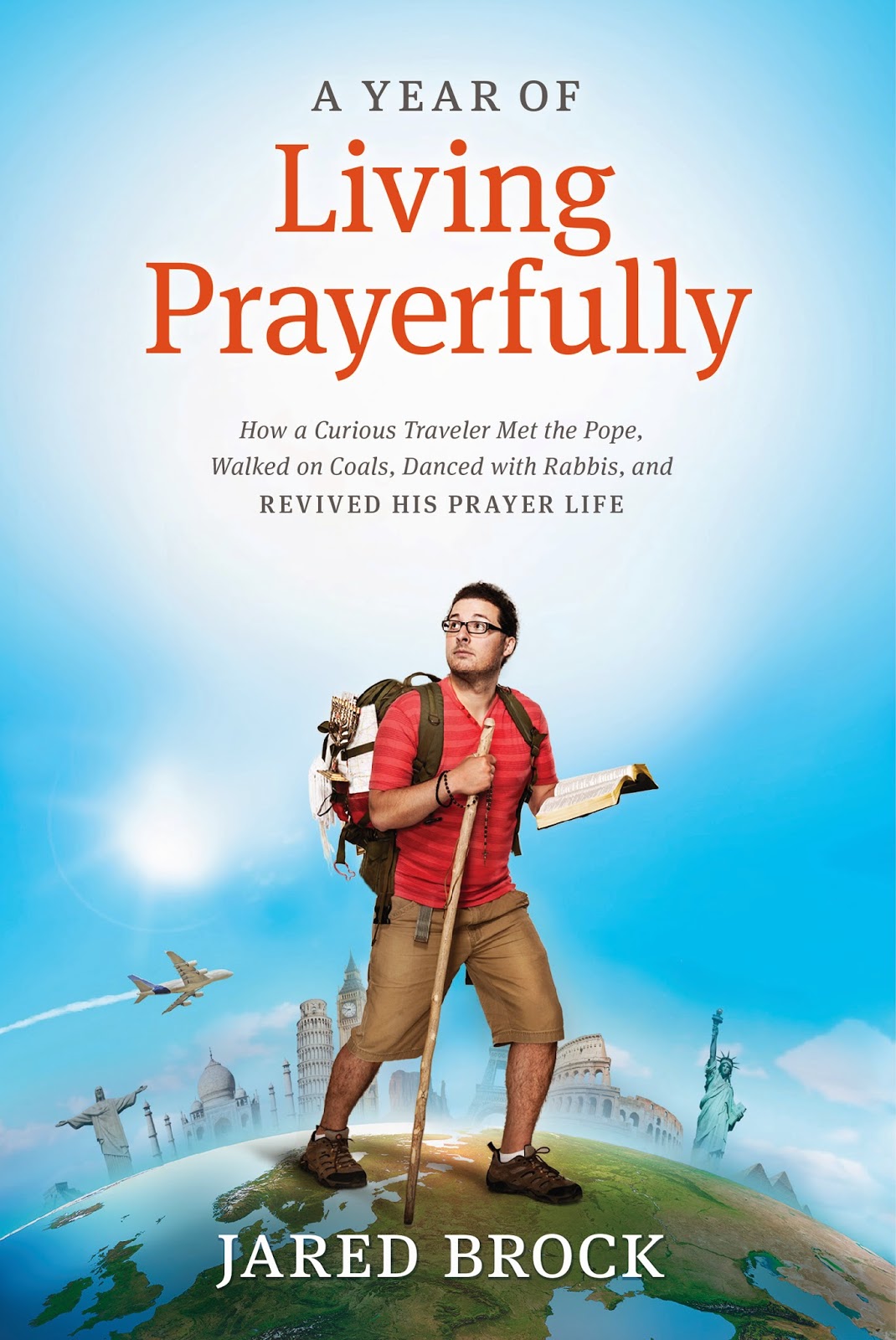 ~*~
Alexis A. Goring's review of Jared Brock's book A Year of Living Prayerfully:

The story starts with a Foreword written by Mark Buchanan who opens with the saying from a bumper sticker, “You’re unique, just like everyone else.”

Buchanan goes on to explain the Jared Brock, author of A Year of Living Prayerfully, is truly unique and really not like anyone else. As you turn the pages of Brock’s book you see that his uniqueness shows forth in his writing. Brock captures your attention as the reader within minutes of thumbing through Chapter 1 and as this reader progressed through the book I found Buchanan’s statement about Brock’s book to be very true when he promised the reader that once you start this book, you can’t stop reading it until the end.

“You will be swept up in the sheer force of the storytelling, the beauty of the prose, the many comedies of error, the exotic cast of characters, and—above all—the drama of Jay’s prayer life,” said Buchanan.

One of the first issues of prayer that the author Brock addresses is prefaced with a quote from Armin Gesswein who said, “If God wants us to pray without ceasing, it is because He wants to answer without ceasing.” Brock shows the reader through the pages about his year of living prayerfully that God answered his prayers all along the way and gave him unbelievable experiences too such as visiting the Pope inside his residence located in Italy!

Who gets to not only pray with the pope but for the pope and have their photo taken with the pope on the Pope’s iPhone?! Brock and his wife did just that during the part of their journey that they spent in Italy. Yes, the pope (Monsignor Alfred) really did ask Brock to pray for him and Brock obliged.

Halfway through his travels around the world, Brock and his wife visited Eastern USA to spend time in Maryland with the Quakers, officially called the Religious Society of Friends and founded by farmers and tradesmen in the mid-seventeenth century. Quakers engage in “waiting worship”—silence.

After his visit with the Quakers, Brock realized that while the church has a lot to learn about silence, “we also need to guard our theology like it’s our life.” Brock emphasizes the importance of listening to Christ and returning to the Word of God (The Holy Bible) as “our primary source of freshwater.”

In silence, Brock says, we commune with Christ. The author shared the example of the prophet Elijah who in Bible times, wanted to hear God’s voice. God sent the wind, the earthquake and the fire and His voice was not in those grand events. God chose to speak to Elijah in a “still small voice” and Brock said one commentary calls “a voice of gentle silence.”

Brock gave a modern day example, asking his readers, "If two people sat down for dinner and both of them talked the entire time, how would they hear the other person’s point of view?" “Silence,” says Brock. “Is a gift that allows us to turn a monologue into a dialogue. Without silence, there is no conversation. Without silence, we miss a large part of what God has to say to us.”

This point resonated with me (Alexis, the book reviewer) as a creative because I thrive on sound, music, colors, movies and it wasn’t until recent years that I began to truly appreciate silence and began to know what it means to “be still” and “know” that God is God as it says in the Bible verse Psalm 46:10.

Prior to his year of living prayerfully, the author asked two questions: 1) Does prayer really work? And (2) How can I be more effective in prayer?

God did not disappoint the author. He revealed to Brock that yes, prayer does work but only if you understand that prayer is a conversation between you and God which means you need to do more than talk to God, you need to listen for His response. God also showed Brock that it is a good thing that not all prayers are answered and that unanswered prayer may mean that God is trying to get your attention.

When breakthroughs in life do not come right away, it should drive you to seek God even more. Somewhere along their journey through Eastern USA, the author and his wife Michelle “came to a small spiritual crossroads.” The author decided that he was “determined to trust God” no matter what the outcome and his faith grew because of that experience.

A Year of Living Prayerfully proves to be an informative, edifying and uplifting read that encourages you to think about what prayer means for mortals in this modern day world. The author doesn’t leave you to discover prayer on your own—Brock includes an interactive list called “Seven Ways to Pray” on the final pages of his book.

Brock’s book is not only well-written, it’s intriguing! I would recommend it as an easy yet educational read for anyone who’s seeking God and looking for something more to life. I’d also share this book with people who grew up in the church and still practice their faith but are looking for a deeper relationship with God.

And that’s exactly what Brock accomplished in writing A Year of Living Prayerfully—he encourages the reader to seek God through the best form of communication humankind did not create—prayer.

*Tyndale House Publishers provided the reviewer (Alexis A. Goring) with a complimentary copy of this book.