Today, we're welcoming a familiar face to my blog! Jennifer Slatterly, an author who writes "missional romance" novels,  first appeared here on Sept. 21, 2014 to talk about her debut novel, Beyond I Do.

Jennifer released her latest novel, When Dawn Breaks, on Dec. 17, 2014 and asked to visit with us again to talk about it.

So without further ado, here's my *new* author interview with Jennifer Slatterly! Please note: Questions by Alexis in bold, answers from Jennifer not in bold.

~*~
Alexis: Welcome back to my "God is Love" blog, Jennifer!

Jennifer: Hi Alexis! Thanks so much for letting me visit with your readers again!

Congratulations on your new novel, When Dawn Breaks! Share a glimpse into what it took to make this book a reality.

Do you mean from first idea to print? That was a long process! I’m a plotter, so I normally plan almost every scene out before I write, and then do a chunk of research. Then I tackle the first draft, which normally comes quickly. After that, I send it through numerous critique partners who usually annihilate it, and then I begin revising then I send it back to a few critique partners, then off to a beta reader. Then I sent it to my editor (the managing editor) who sent it to early readers who gave suggestions. Then it went to through big picture edits, and I was given more suggestions. After I made the necessary changes, it went through more edits, and finally, went to print.

Describe the concept behind your title When Dawn Breaks. Does this book title carry special meaning for you? Why or why not?

It’s funny, sometimes as I’m writing certain titles jump out and stick with me. That was certainly the case with When Dawn Breaks. This is a play on dawn breaking after a storm or dark night. The novel begins with a hurricane that, though devastating initially, ultimately becomes the catalyst for beautiful life change. I really believe this is true for the Christian life. God doesn’t allow us to weather a storm unless He has an amazing, grace-filled purpose in it.

You drop the reader into the action at the start of the story where inclement weather is descending upon the town in Texas where your main character lives, causing evacuation. Was this your original plan? Or did you delete a previous scene? It works! Tell us why.

Yes, this was my original intent, though initially I started a tad earlier in the day with Jacqueline, a real estate agent, at an open house no one came to. (I wanted to show the futility she was beginning to feel with her old way of life.) Then I had her walking outside, seeing the beautiful beach with the storm on the horizon. But my critique partners encouraged me to cut some of the details and start closer to the action. As always, they were right on!

How did you choose the setting for your book?
The setting came from my time living in Texas and Louisiana. We lived in Louisiana when Katrina hit, and the church we attended was heavily involved in relief efforts. I saw first hand the brokenness people suffered after the storm, how hard it was for many parents just to keep stepping, let alone care for their children. And yet, I also saw a miraculous (truly) outpouring of God’s love and grace. And in that I saw hope. Beauty. I wanted to retell a bit of the wonderful grace I saw displayed by God’s people.

Tell us about your main character, Jacqueline Dunn. What inspired you to create this character? What are her passions and flaws?

I’ve felt a passion lately for older, (relatively, compared to the age of most heroines in the CBA) single adults, those who’ve been divorced and came to grace a bit later, after they’ve made mistakes. This was my vision for Jacqueline. She’s spent 51 years living for herself, and this has created a wedge between her and her adult daughter. A wedge she longs, with Christ’s help, to break. I felt like this is reality for many families, even those in the faith. And I think it can be a challenging road to navigate. How does grace and truth fit when we’re in the midst of dysfunction? How does forgiving oneself and accepting the depth of grace affect this process? There’s no easy answer except: lean on Christ, do what we can to live at peace with others (Rom. 1:16), and leave the rest to God. That doesn’t guarantee relational healing, but it does mean, regardless the outcome, we’ve done all we knew to do. And there’s peace and healing in that.

Your character Delana has a tumultuous relationship with her mom Jacqueline. Why? How does this tension shape your story?

Delana, Jacqueline’s daughter, holds on to a great deal of hurt. Jacqueline has only been a Christian for a year, and prior to that, she often pushed her daughter aside, to excel in her career or for her latest boyfriend.

There was one time in particular when Delana desperately needed her mother, and Jacqueline wasn’t there for her. So Delana doesn’t trust her. When Jacqueline reaches out to her, Delana’s always wondering, “For how long? When will you ditch me this time, Mom?” Add to this the fact that Delana’s not a Christian and doesn’t understand (or believe) Jacqueline’s life change. Therefore, Jacqueline needs to show her, through her actions, that she’s different—that she truly will stand by her daughter. No matter what. Isn’t that what every child, young or adult, needs to know?

What role does Jacqueline’s faith in God play in the broken relationship between she and her daughter Delana?

Oh, my, a big one! God is a God of reconciliation, unity, grace, and peace, and I believe He loves to see families find healing and restoration. As such, He gives Jacqueline the courage and perseverance to show consistent, steady love to her daughter, even when Delana spurns her efforts and acts downright hateful. But isn’t that what God’s done for each of us? While we were rebellious, selfish sinners, Christ died for us—to reconcile us to the Father.

Jonathan Cohen is another one of your main characters. Share his story. Why is the role he plays important?
I love Jonathan! Such a sweet, caring man! He lost his wife, the woman he adored, five years before the book started. Having found such a deep love already, he’s not sure he’ll ever find that in another woman. And yet, he’s lonely. To exacerbate matters, his sister believes he shouldn’t spend the rest of his life alone and embarks on a hilarious plan to help him get hitched! But after a few crazy blind dates, he’s more certain than ever that dating isn’t for him. Luckily Jacqueline steps in to save him just in time!

What is your favorite scene in this story? Why?

I don’t want to give too much away, but probably when Jonathan takes Jacqueline on a picnic and realizes, once they get there, that he doesn’t have eating utensils or anything for them to sit on. I loved this scene because I’ve always enjoyed picnics and this scene reminded me of a river walk area my honey and I used to visit in Louisiana. But I also felt this really revealed some of the things I love most about Jonathan. He really wants to be romantic but doesn’t always know how, so his efforts turn out a bit comical. And endearing. Adorable, actually.

Where did you get the inspiration for your main characters?

This is a fun question to answer because the inspiration came from individuals I greatly admire. Jonathan, a widowed railroader, was a lot of fun to create because my husband is a railroader. He’s worked for Union Pacific for almost 30 years, so yes, I did sprinkle a bit of my real life hero into Jonathan’s personality and encounters.

As to Jacqueline, her character was inspired by a woman from our old church who at the age of 50, felt called to foster a teenage girl. This really struck me. I wondered if she originally felt intimidated. Not only was God calling her to a life-changing mission, but she was older, and single. Yet she answered the call with courage and perseverance, and a life was dramatically changed for the better because of it.

As I was crafting Jacqueline, I wanted to take this a step further. I wondered, what if my character was not only older and single, but what if she was a new believer, one with deep regrets stemming from mistakes she made when parenting her child. Could God still use her, regrets and all, to bring hope to three orphan children? And thus, Jacqueline was born.

What was the most challenging part of writing this book? And the most rewarding?

This book was actually fairly easy to write. I visualized each character and their journeys so clearly. I simply transcribed what played out in my head. I also felt God’s presence so strongly throughout the writing process—I believe He guided me in each scene. In regard to the most rewarding, there’s a scene where Jacqueline “hears” from God (through a Scripture passage). The passage was so perfect for the scene and really a major theme of the book—breaking the bonds of generational poverty and abuse. I believe that passage came straight from God.

I’d been praying about it. I wanted a verse that really spoke deeply to Jacqueline, but my brain was blank. So I turned to God in prayer then went to Scripture. I randomly flipped to the passage. Like immediately. I’m normally not a flip and point reader, but that’s what happened. It was a beautiful moment.

My deepest hope for When Dawn Breaks is that it will draw readers closer to Christ and give them the courage to follow wholeheartedly after Him because that is where abundant life is found.

Alexis: Thanks for the interview Jennifer! May God bless you in your writing endeavors! Do you have any final comments?

Thanks for having me on your blog again! Before I leave, I’d like to ask your readers one question. I shared my favorite scene setting from the book, and it arose from a romantic place my hubby and I once frequented.

Jennifer's question: Where is the most romantic place you’ve been? Tell us about it!

Jennifer Slattery writes soul-stirring fiction for New Hope Publishers, a publishing house passionate about bringing God’s healing grace and truth to the hopeless. She also writes for Crosswalk.com, Internet Café Devotions, and the group blog, Faith-filled Friends. When not writing, Jennifer loves going on mall dates with her teenage daughter and coffee dates with her handsome railroader husband.

Visit with Jennifer online at JenniferSlatteryLivesOutLoud. 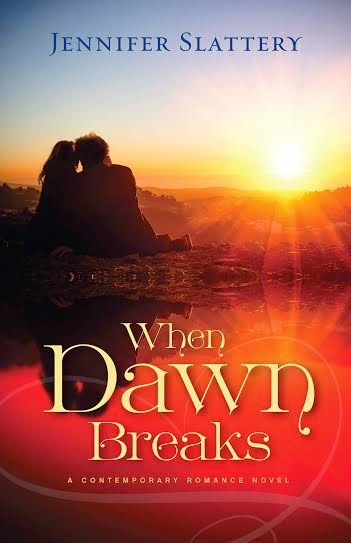 As the hurricane forces Jacqueline to evacuate, her need for purpose and restitution motivate her to head north to her estranged and embittered daughter and into the arms of a handsome new friend. Dealing with his own issues, Jacqueline isn’t sure if he will be the one she can lean on during the difficult days ahead. And then there are the three orphans to consider, especially Gavin. Must she relinquish her chance at having love again in order to be restored?
Read a free, 36-page excerpt of When Dawn Breaks here: http://issuu.com/newhopedigital/docs/slattery_sampler/1