Romantic Reads: ‘Til I Want No More 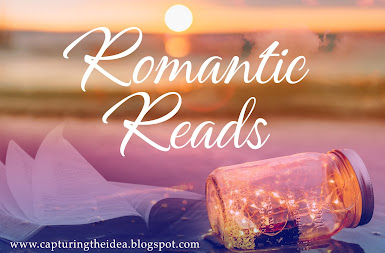 Interview with Robin W. Pearson about her new novel,
‘Til I Want No More:
Congratulations on penning such a poignant second novel! Let’s talk about it …
Alexis: I love how your story’s heroine, Maxine, is a writer and that she has her own column! How did you create this role for her? Did you pull from any real-life inspiration for this?

Robin: Maxine is creative, whiny, introspective, faithful, family-oriented, passionate, fearful, and fun loving. Yes, I’d say I drew from a teeny bit of “real-life inspiration.” Just like my main character, I once dreamed of writing a national column on parenting, a subject I blog about. Also, Maxine communicates best through her writing and feels safe hiding in plain sight in front of her readers. I poured into her some of my own strengths and weaknesses, as well as my desire to be truly loved and known.

Alexis: Maxine is a woman keeping a deep secret that could rock her world as she knows it. What was it like creating this backstory and how do you see it making Maxine the woman she is today?

Robin: In a way, Maxine’s backstory—her rebellious childhood and current struggles—are a metaphor for the way we strain against godly wisdom and love. Her secrets represent the burdens we all carry, things we feel we can’t share with anyone for fear of judgment, reprisal, or due to our own self-recrimination. Often, we think redemption is something we can earn or the result of some physical change and can’t accept it when it’s freely given. These thoughts hinder our ability to live forgiven and accepted by God.

Alexis: Why does Maxine believe that her dad was the only person who really knew and loved her?

Robin: Maxine has an idealistic, even unrealistic, view of her childhood. She sees everything about her life as perfect before her father died. No rebellious teenage years, no memories of running away from home, no rejection or abandonment, no mistakes. When she lost her father, it sent her life into a tailspin that led to both her searching for and losing love. Her desire for that typical, nuclear family—mother, father, sibling, dog—shows our need for God, our Abba Father, who knows us intimately, loves us unconditionally, and provides everything we need.

Alexis: Who is JD and what role does he play in this story?

Robin: JD gives young Maxine’s wandering heart a home, or so she thinks. He accepts her, helps her feel she’s worthy of love, and gives her name meaning. Though he in essence is the same person when he returns years later, his presence has the opposite effect: He turns her world upside down. Since Maxine considers herself unlovable and unforgivable, she struggles to embrace what he has always offered her—wrapped up in a good-looking package!

Alexis: Why is diversity in Christian fiction important to you? How did you intentionally portray this in your story? Briefly explain the racial makeup of each of your main characters.

Robin: Though we authors write about the same truths in Christian fiction, we need diverse thoughts, perspectives, and characters to complete the picture, to expand what and how we learn and express our faith. I write what I know; I share my own background. And my experience is filled with all kinds of people—yes, most of whom look, eat, and sound like me.

But what completes “me” extends beyond the nine folks who regularly gather around my kitchen table. They include my extended family, brothers and sisters in Christ, other writers, the people at the grocery store, my audience and my readers… Putting all these faces and cultures in my stories, whether they’re black, white, and Cuban like the characters in ’Til I Want No More, reflects real life, which helps connect us, not divide us.

Alexis: Tell us about Theodore. Describe his looks, personality and heart. What is his motivation?

Robin: Theodore Franklin Charles is a cutie with sandy-colored, curly hair who hails from New Orleans, Louisiana. He moved to Mount Laurel when he took a job as the headmaster of a private school there. He senses Maxine’s desire for a strong leader in her life, and he steps right into the role of father figure because he’s used to running things and taking care of people. Intensely loyal, Theodore adores her and thinks he’s helping her by anticipating her every need and thought and speaking for her. He believes the two share the same commitment to family, and he considers her honest and naïve, qualities that appeal to him.

Alexis: What is it about Theodore that moved Maxine to say “yes” when he proposed?

Robin: Theodore loved the person who Maxine wanted to be, so she was saying “yes” to that new life he offered, what her parents wanted for her. He represented acceptance, obedience, security, and the “saved and sanctified” Maxine who had never made such life-altering mistakes or rebelled against her parents.

Alexis: Why do the readers of Maxine’s column believe everything she says as she chronicles her journey to the altar, but her family doesn’t believe a single word of it?

Robin: Her readers believe the Maxine she shows them, but her parents see her pain and are well-acquainted with her past. They witness her daily struggles. In our own lives, we have a way of showing “outsiders” what we want them to see, but our Father God sees who we really are and He knows the truth. He made us and loves us as we are, warts and all.

Alexis: Who is Maxine’s best friend and what role does she play in shaping this story?

Robin: As a teenager, Maxine formed a friendship with Evelyn, one of the main characters in A Long Time Comin’. She’s just had her first child, a daughter, and like Maxine, is recovering from her own problems with a Lester man. Both Evelyn and Maxine lost their fathers at a young age and grew up in the midst of a large family with strong extended family relationships. She has walked alongside Maxine a long time and is part of that past that Maxine just can’t shake, despite her best efforts. We all need friends like Evelyn who aren’t afraid to speak the truth in love.

Alexis: What can you tell us about Celeste’s role in this story without giving away the plot?

Robin: Thirteen-year-old Celeste was adopted as a baby by Vivienne and John Owens, Maxine’s mother and stepfather. She represents both the inescapable pain of Maxine’s past and the future hope and forgiveness she’s desperately seeking. Many of us carry burdens; we try to give them away, turn our backs on them, or set them aside for a time. Until we acknowledge them and truly give them to God, we’ll never live freely.

Alexis: What are the spiritual themes of this story? How did your faith in God impact your storytelling?

Robin: Forgiveness, redemption, salvation, faithfulness…so many spiritual themes play a role in ’Til I Want No More. I write about the ultimate love story: God’s passion for His creation, man and woman. Our love for Him impacts all our relationships—between spouses, within families, and among friends. My faith drives my writing.

Alexis: What do you want readers to remember most about this book? Why?

Robin: That we’re all immature in some way; we’re all growing. I want readers to consider what they think about themselves and to let go of the lie of condemnation and instead, to speak life and truth. What we hate about ourselves—a weakness, a need, a mistake, our fears—can be the very thing God uses to help or inspire someone else, to strengthen us. He purposely designed us and calls us by name.

Robin: I’d love to hear readers’ thoughts about ’Til I Want No More and how it impacted them. Please share your reviews about this book and my first novel, A Long Time Comin’!

Robin W. Pearson’s writing sprouts from her Southern roots, her faith in Jesus Christ, and the love of her sweet husband, seven children, and her dog. 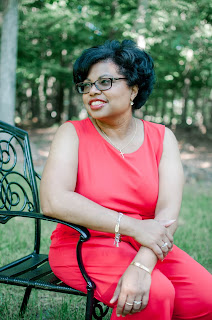 In her 25-year editorial career, she’s corrected grammar up and down the East Coast.

Both her Christy Award-winning debut, A Long Time Comin’, and her second novel, ’Til I Want No More, have earned a starred review from Publishers Weekly.

“Pearson delivers a poignant debut that explores the faith of one African American family. . . . The writing is strong, and the story is engaging, and readers will be pleased to discover a new voice in Southern inspirational fiction.” ―Booklist 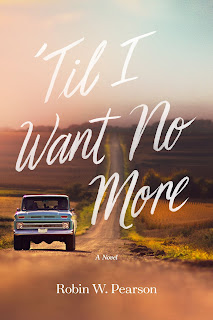 When the man she loved years ago returns to town, one young woman’s complicated past rises again, threatening to expose her well-kept secrets.
If Maxine could put her finger on the moment when her life went into a tailspin, she would point back twenty years to the day her daddy died. She tells herself he’s the only person who ever really knew and loved her, and if he hadn’t left her behind, her future would’ve taken a different path. No absentee mother, no stepfather, no rebellious ripping and running during her teenage years. And no JD, who gave her wandering young heart a home, at least for a time.

But that’s over and done with. All grown-up now, Maxine has pledged her heart and ring finger to Theodore Charles, the man she’ll promise to love, honor, and obey in front of God and everybody. At least that’s what she’s telling anybody who will listen. The only folks buying it are the dog and the readers of her column, however. Her best friend and family aren’t having it―not even Celeste, the double bass–playing thirteen-year-old the community of Mount Laurel, North Carolina, believes is Maxine’s adopted sister. And apparently, neither is the newly returned JD, who seems intent on toppling Maxine’s reconstructed life.
As her wedding day marches ever closer, Maxine confronts what it means to be really known and loved by examining what’s buried in her own heart and exposing truth that has never seen the light of day.

A Christian fiction novel with a poignant story of romance, a search for truth, and a journey to redemption. For fans of Chris Fabry, Lauren Denton, and Charles Martin.

~*~
Enter this book giveaway contest for your chance to WIN a copy of Robin’s book by filling out the entry form on the Rafflecopter widget below:


a Rafflecopter giveaway
Posted by Alexis at Tuesday, May 18, 2021