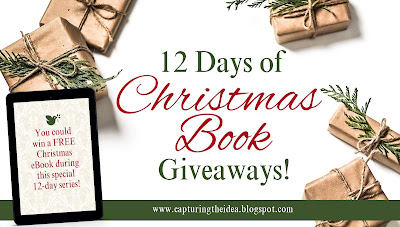 Let's welcome my author friend Julie Lessman to the blog!


She's our first guest for my blog's holiday series, "12 Days of Christmas Book Giveaways" and she's certainly the most generous because she wants to give away a bundle of SIX e-books to EACH of the six winners of this book giveaway contest!


Enjoy this special treat because it's only happening once (the other authors are not giving away these many books but they are each giving away at least one, so stay tuned)!

Now let me tell you a little bit about Julie and her wonderful Christmas stories: 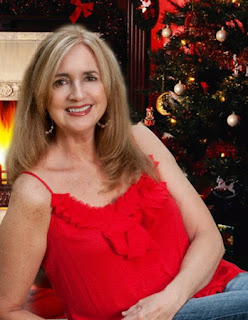 
Julie Lessman is an award-winning author whose tagline of “Passion With a Purpose” underscores her intense passion for both God and romance. A lover of all things Irish, she enjoys writing close-knit Irish family sagas that evolve into 3-D love stories: the hero, the heroine, and the God that brings them together.


Author of The Daughters of Boston, Winds of Change, Heart of San Francisco, Isle of Hope, and Silver Lining Ranch series, Julie was American Christian Fiction Writers 2009 Debut Author of the Year and has garnered over 18 Romance Writers of America and other awards.

Julie has also written a self-help workbook for writers entitled Romance-ology 101: Writing Romantic Tension for the Sweet and Inspirational Markets. Contact Julie through her website and read excerpts from each of her books at www.julielessman.com. 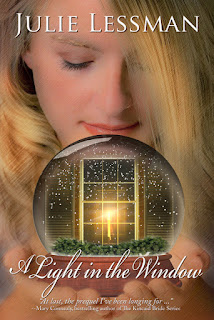 Book Blurb for A Light in the Window:

A Light in the Window: An Irish Christmas Love Story (Award-winning Novel)

One stirs her pulse, the other her faith.

But who will win her heart?

Marceline Murphy, a gentle beauty with a well-founded aversion to rogues, catches the eye of two of Boston’s most notorious. Patrick O’Connor and Sam O’Rourke are best friends with a bond like brothers … until they meet one woman neither can have.

Overseeing St. Mary’s Christmas play—A Light in the Window—Marcy wrestles with her attraction to both. But when disaster strikes, she’s destined to discover the play’s message firsthand. For although two men have professed their love, only one has responded to the light in the window.

Here's the video for A Light in the Window: http://bit.ly/1ROm4d6 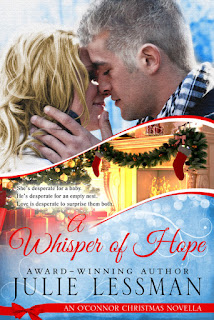 Book Blurb for A Whisper of Hope:

A Whisper of Hope — An O’Connor Christmas Novella (associated w/Daughters of Boston and Winds of Change Series):

She’s desperate for a baby.

He’s desperate for an empty nest.

Love is desperate to surprise them both.

With a husband dead set against adoption,

Charity O’Connor Dennehy has barely a whisper of hope

for more children. But if hope doesn’t disappoint …

will it be enough to find a precious bundle under her tree? 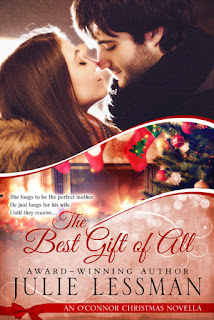 Book Blurb for The Best Gift of All:

The Best Gift of All — An O’Connor Christmas Novella (associated w/Daughters of Boston and Winds of Change Series):

She longs to be the perfect mother.

He just longs for his wife.

Until they receive ... the best gift of all.

Everyone knows Lizzie and John Brady have the perfect marriage.

But when Lizzie’s desire to be a good mother

eclipses her desire for her husband, the honeymoon is definitely over.

Can the spirit of Christmas heal their hearts when Lizzie gives John the best gift of all? 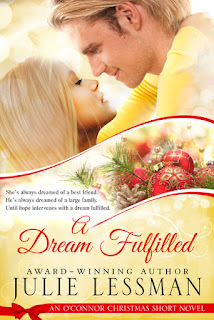 Book Blurb for A Dream Fulfilled:


A Dream Fulfilled — An O’Connor Christmas Novella (associated w/Daughters of Boston and Winds of Change Series):


He’s always dreamed of a large family.
Until hope intervenes with a dream fulfilled.

Katie O’Connor McGee learned early on not to let anyone get too close. Picked on mercilessly in school because of an unsightly handicap, she kept everyone at arm's length, including three big sisters seven to fourteen years older. As far as Katie was concerned, friends were meant to be restricted, not embraced.

But when she meets Arlene Campbell and her little girl, Addie, during playtime at a park with her own children, she discovers a friendship for which she’s waited a lifetime. A dream hidden deep in her soul she didn’t even know existed until she connected with a woman who would change her life forever, teaching her the depth and sacrifice of true friendship.

Luke McGee has dreamed of having a large family since he roamed the streets of Boston as a virtual orphan, finally finding a home—and his heart—in a marriage to Katie O’Connor and their two young girls. However, once Katie’s time and affection shifts toward a new friend who needs her, it creates turmoil in Luke’s happy home. It doesn’t help that as Director for the Boston Children’s Aid Society, Luke works long hours providing homes and hope for troubled children on the streets.

But when he reaches out to one hardened little boy, his hope to make a difference suddenly coincides with that of his wife’s, sowing the seeds of a dream fulfilled for them all. 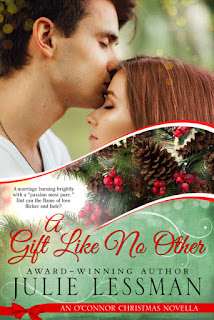 
A Gift Like No Other — An O’Connor Christmas Novella (associated w/Daughters of Boston and Winds of Change Series):


Her dream is writing.
His is the perfect wife and mother.
Until God fulfills them both with a dream like no other.

Twelve years ago, Faith O’Connor happily gave up her dream as a copywriter to become a wife and mother, clinging to her husband’s promise she could return someday. But when the opportunity arises to write for the Boston Herald again two days a week, her dream hits a snag … along with her marriage.

To Collin McGuire, family is everything because he never really had one of his own. Raised by a father who died early and a mother who didn’t care, Collin is determined to give his children the very best with a full-time mother. But when he denies Faith her dream, he soon discovers he’s denied his own as well … until Christmas day brings a healing through a gift like no other. 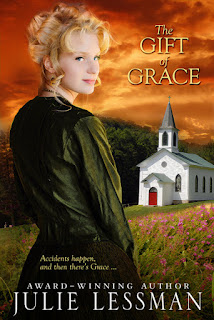 Book Blurb for The Gift of Grace:

The Gift of Grace — A Frontier Christmas Novella (formerly part of the Cowboy Christmas Homecoming Collection):

She’s the Accident to His Prayers …

with his new housekeeper and nanny.

and scorched nearly everything she cooks.

But he’s desperate, and she’s as destitute as they come.

Even though she’s no good with her hands,

Grace sure has a way with her heart.

added color to his daughters’ lives, and broken

down the wall he’s built up since his beloved wife died.

But when Grace’s past threatens Cole’s family,

she’s given one last chance to be home for Christmas ...

if she hasn’t burned it down yet.

Enter this multiple book giveaway contest for your chance to WIN a bundle of these books written by Julie Lessman, by filling out the entry form on the Rafflecopter widget below:

a Rafflecopter giveaway
Posted by Alexis at Sunday, December 01, 2019