I'm on the launch team for this new release (book) and I'm super excited to share this lovely story with you via this author interview with Amanda. Enjoy!

Amanda: We’d planned a family vacation to Niagara Falls. Before the trip, I was reading up on the history of the area, because that’s just what history nerds do. I read quite a bit about the stunts and daredevils, and as I was walking along, looking at the Falls, the idea of a daredevil falling in love with a woman who feared risk, came to me. When Barbour put the word out that they were looking for authors to submit to a destination romance line, my sister suggested I do Niagara Falls and make the hero a tightrope walker. Sisters always know best!

Alexis: Why did you choose Niagara Falls, NY as the backdrop for this story?

Amanda: Because the location had to be near the Falls, where all the tightrope stunts were performed.

Alexis: Why did you set this story in 1870 and not another era?

Amanda: The most famous funambulist in the Victorian era was undoubtedly Charles Blondin, who performed at Niagara Falls in the late 1850s. I wanted my hero’s stunts to take place later than that, and not around the time of the Civil War. So 1870 it was!

Alexis: Who is Adele and why is her journey so important in this story?

Amanda: Adele Linley is basically a Victorian Scarlett O’Hara, though not as feisty, perhaps. She loves her family home in England and needs money to keep it from being sold to pay for family financial difficulties, so she travels to England on the hunt for a wealthy American husband who will provide her the capital she seeks. Ultimately, though, her journey is more than a trip across the ocean, but a deeply emotional and spiritual transformation.

Amanda: Adele and Drew have quite a bit of conflict, due to their differing views on danger and risk. Eventually, that conflict reaches a climax…which basically equals lots of fun scenes for me as the author.

Alexis: Drew Dawson is the hero of this story. Describe him. What makes him special and significant to this story?

Amanda: Drew is driven to take risks due to his need for income to provide for his wheelchair-bound sister. Despite his own lack, he’s kind and generous. He loves the Lord and puts his future into God’s hands.

Alexis: Describe Adele’s relationship with her family. Does she like being the daughter of an English aristocrat? Why or why not?

Amanda: When the story opens, the family are aristocrats in name only. Adele travels to England with costume jewelry and made-over dresses. Her mother is not a strong person, and her brother a chronic drinker and gambler.

Alexis: How did Drew’s childhood as an orphan affect his drive to succeed?

Amanda: Drew has known what it is to go to bed on an empty stomach, to fall asleep in a back alley, to struggle and strive. His sister is an invalid, and he seeks to provide her a better life. He’s driven, as it were, by necessity.

Alexis: Who is Franklin Conway and how does he affect Adele’s affections?

Amanda: Franklin Conway was SUCH a fun character to write! Those who have read the story are cringing right about now. He’s a man rich in capital, but without the social polish required to enter the highest echelons of society. Adele sees in him an answer to her problems—she will provide him the class and propriety of a British wife, and he will use his capital to help her family. It’s a practical solution, but the closer Adele gets to making a final decision, the more she begins to doubt herself.

Amanda: Drew is the first man who takes the time to truly care about Adele. She’s accustomed to doing for herself and bearing emotional burdens alone; he comes alongside her and takes time to listen and understand. He makes her laugh, shows her she’s special and unlocks a part of her heart she didn’t know existed.

Alexis: What makes Drew want to fight for Adele?

Amanda: Adele is different than anyone Drew has ever met. She’s a lady living in a world of affluence but has a rare heart of compassion. She challenges him with her questions and encourages him in his quest to care for his sister. She’s both sweet and stubborn and sets him to dreaming of a future with her.

Amanda: That we can only find peace when we trust and truly surrender to God. Trying to maneuver circumstances and people to get a desired outcome causes stress and bad choices, whereas a true “handing over the reins” to Jesus, brings the greatest security we can hope to have.

Amanda: Thanks so much for having me! I hope you enjoyed this peek into My Heart Belongs in Niagara Falls, New York. If this interview has piqued your interest, and you’re looking to discover more about the novel and characters, I’d love it if you followed my Facebook page (www.facebook.com/amandabarrattauthor).

Over the next few weeks, I’ll continue to share more about the story, characters, and history behind the novel’s setting. 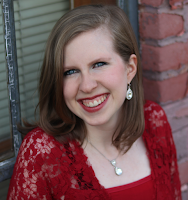 ECPA bestselling author Amanda Barratt fell in love with writing in grade school when she wrote her first story – a spinoff of Jane Eyre.

Now, Amanda writes inspirational historical romance, penning stories that transport readers to a variety of locales–from the sweeping coastline of Newport, Rhode Island, to the rugged landscape of Central Texas. Her novella, The Truest Heart, finaled in the 2017 FHL Reader’s Choice Awards.

A member of American Christian Fiction Writers, she lives in the woods of Michigan with her fabulous family, who kindly put up with the invisible people she calls characters.

These days, Amanda can be found reading way too many books, watching an eclectic mix of BBC dramas and romantic chick flicks, and trying to figure out a way to get on the first possible flight to England. 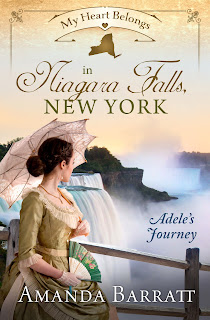 She avoids danger at all costs. He makes his living by rushing headlong into it.

Outwardly, Adele Linley’s trip to visit her American cousins is nothing more than a summer vacation. In reality, she’s the daughter of an English aristocrat with barely a penny to her name seeking a rich American husband.

Having grown up in an overcrowded orphanage, Drew Dawson is determined to make a name for himself. He’ll take any honest job to provide for his sister—even crossing Niagara Falls by tightrope.

Adele meets incredibly wealthy and pompous Franklin Conway who takes an immediate fancy to her. But she would truly like to marry for love. When she encounters the mysterious Drew in the garden, Adele is confused by her feelings for someone who is everything she is NOT looking for. Will they both stay the course they have chosen for themselves?

~*~
Buy Amanda's book on Amazon
~*~
Connect with Amanda:
Facebook – https://www.facebook.com/AmandaBarrattauthor
Sign up for her author newsletter on her website— http://amandabarratt.net/
SaveSave
Posted by Alexis at Tuesday, January 23, 2018