Let's welcome Toni Shiloh to the blog today and congratulate her on her book's birthday! Today is the release of her new novel, Returning Home and she's here to talk about it.


Alexis: Why do you call this book, “Returning Home”? Share the inspiration behind the story.

Toni: Although this book is about Jo and Evan, it is also about their friends. Half of them return to Freedom Lake for some reason or other. For Evan, he has to return home to heal and even though Jo Ellen is already in Freedom Lake, she returns to the body of Christ and finds home in the kingdom. That’s the inspiration behind the name. The inspiration behind the story happened when I was out driving. I wondered what would happen if someone was in a car crash that caused him or her a limb. Hence what happens to Evan.

Alexis: Jo Ellen Baker is the heroine of this story. Tell us about her heart, personality, and outlook on life.

Toni: Jo has such a big heart but she’s terrified of anyone seeing it. She hides behind overalls and a hammer. Life has dealt her many blows and she expects them at every turn all the while hoping that luck will grant her favor.

Alexis: Evan Carter is the hero of this story. Describe his looks, personality, and most prominent character flaw.

Toni: Evan has such a big chip on his shoulder when he first walks onto the pages of Returning Home. Despite that, I love his character. His desire to make amends is one I admire. He’s your average looking guy but his grins and strength of character quickly capture Jo’s heart.

Alexis: Describe the setting of this story, Freedom Lake. What makes it special?

Toni: The lake! I love water and was so happy to create a setting with that as a backdrop. The book starts in the autumn season so I made sure to throw in some colorful foliage against the lake’s beauty.

Alexis: What is a carriage house? How does Jo Ellen’s task of renovating it affect this story?

Toni: A carriage house is usually a home built over a garage. Evan needs a place that can accommodate his wheelchair. It’s a central part of the story because it’s how they grow closer together…through the renovation.

Alexis: What is it about Evan that Jo Ellen loves?

Toni: There is a quietness about him that soothes her. She grew up dealing with drama from her mother and sister. When she’s around Evan she can be herself and relax and have fun.

Alexis: What is it about Jo Ellen that Evan cannot forget?

Toni: Her strength. He’s always seen her as calm, cool, and collected no matter what is thrown at her. It centers him in the midst of his own storm.

Alexis: Why did Evan tease Jo Ellen so “mercilessly” when they were kids? How did Jo Ellen respond to it?

Toni: Well, I’ll say sometimes we don’t handle attraction well. I don’t want to give it all away so I’ll leave it at that.

Alexis: Why does Evan have to return home and move in with his parents? How does he feel about this situation?

Toni: Oh he absolutely hates it! What grown-up wants to return home and end up living with their parents? He feels like a failure and doesn’t handle the situation very well.

Alexis: What role do Evan and Jo Ellen’s faith in God play in this story?

Toni: Evan has forgotten his faith in the midst of tragedy. Jo refuses to participate in a faith that seems hypocritical. Both have to come to terms with what is real versus what they believed to be true.

Alexis: What was your greatest challenge in writing this story?

Toni: Hoping that I was true to each character and their own issues they needed to overcome. I’ve never been in either situation so I had to pull on empathy and research.

Alexis: What about writing this story brought you the deepest joy?

Toni: The End! This was the first full-length novel I wrote and I felt such an accomplishment when I completed the first draft.

Alexis: If you were a counselor to Jo Ellen and Evan in this story what would you say to help?

Toni: Your attitude can make or break your day. Often times are pessimistic beliefs and thoughts create an unhealthy environment that is our own undoing.

Alexis: What do you want your readers to remember most about Returning Home?

Toni: That no matter where you are on life’s journey, God can see you through.

Toni: Thank you to all who have followed me on my writing journey. I couldn’t do this without your support and prayers. May God bless you as you have blessed me.

She spends her days hanging out with her husband and their two boys. She is a member of the American Christian Fiction Writers (ACFW) and president of the Virginia Chapter.

You can find her on her website at http://tonishiloh.wordpress.com.

~*~
Blurb for Returning Home (book): Jo Ellen Baker is shocked to find out that the boy who teased her mercilessly throughout high school, has returned to their hometown of Freedom Lake, and he’s missing a leg. 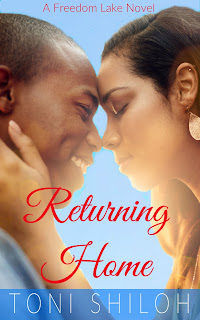 When his mother asks her to renovate their carriage house to give him a place to gain his independence back, she wants to say no. But one look at him brings a rush of forgotten feelings.

Evan Carter can’t believe he has to return home and live with his parents. Every hope and dream he ever had dissipated in a car crash that cost him his leg. Stuck in a wheelchair, he’s forced to re-examine his relationship with God and the local carpenter, Jo Ellen Baker.

Will renovating his home open the door for a mended relationship, or are some wounds too deep to heal from?