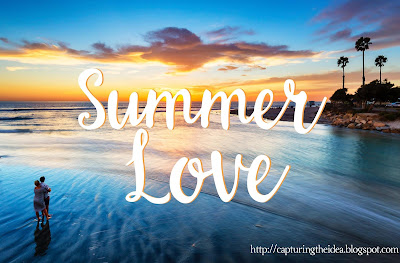 Welcome my writer friend Angela Ruth Strong to the blog! She's here to share an excerpt from her story "Finding Love in Seaside". It is the fourth and final story in a story collection called, Finding Love at the Oregon Coast: A Romantic Novella Collection.

"Finding Love in Seaside" story blurb: Christina plans to spend her honeymoon alone, but when the bed and breakfast owner offers her a position as cook, she starts to feel at home in his kitchen…and in his arms. 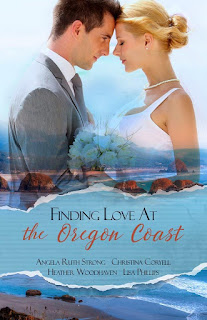 Dave Lake is the hero of Finding Love in Seaside. His story is one of unexpected surprises and answers to prayer…both which show up in the form of Christina Lovejoy (the heroine). Christina walks into Dave’s life after she walks away from the man she was going to marry on their wedding day. She’s there for her honeymoon, without a husband. Their meet-cute is awkward, adventuresome and amazing all at the same time. The author knows how to tell a story! She draws the reader in from the start and keeps their attention until the end. The author’s storytelling style makes the readers care about the characters who are completely captivating! The structure of this story is solid and the scenes come alive on the page.

My favorite line from this story is from Dave after a trust exercise in which he asked Christina to fall back into his arms. Here's the line that touched my heart: “You knew in your head I was going to catch you,” he said in her ear, “but you didn’t feel safe in your heart until you’d experienced me catching you multiple times. It’s the same way with God. The more we let Him catch us, the more our hearts trust Him.” Ultimately this story, though fictional, teaches a real-life lesson about learning to trust God.

I loved every moment of these characters’ lives and would recommend this entire collection of stories "Finding Love at the Oregon Coast", to every woman who is a romantic at heart.

~*~
Excerpt from Chapter One of "Finding Love in Seaside" by Angela Ruth Strong:

Christina never imagined she’d be going on her honeymoon alone.

She faced the massive, yellow, Victorian home nestled on a cliff above an ocean and took a deep breath of salty air. She hitched the full tulle skirt of her wedding dress and climbed the steps to let herself through the solid front door.

The entryway was as dark as the exterior was bright. Christina squinted to see in the drastic lighting change. Everything from the floor to the walls to the ceiling was made of wood, everything except the brick fireplace. It gave the room a manly feel despite the antique furnishing and Oriental rug. Was the place run by a man or a woman? And where were they? It was incredibly quiet except for some kind of dripping sound. And footsteps pounding overhead.

A man raced down the stairs. He barely glanced her direction before charging to a roll top desk and grabbing a phone. He dialed then ran a hand over his head while waiting for someone to answer. She could hear the ringing on the other end.

Maybe the man hadn’t seen her. The room was pretty dark.

She waited for him to slam the phone down before speaking again. “Hi, I think I’m a little early for check-in time.” Maybe that was the problem. He wasn’t ready for her arrival.

His gaze flicked her way. He was average height with light brown hair and hazel eyes, but with over average confidence that somehow made his ordinary appearance an asset. Like he would have been picked to run CIA operations since he could blend into a crowd so well.

He looked past her out the front window. Why was he ignoring her? What was wrong? With his bizarre behavior and the dark room, she was starting to get a little creeped out. She reached for the light switch and flipped it up.

“No!” He held out his hands and sprinted from behind the desk to stop her.

What was the big deal? Something strange was going on.

A zapping sound came from overhead. She startled, looking up. Lightbulbs popped on then flickered. Sparks flew. The huge, brass light fixture dropped from the ceiling and swung from a cord. It was like she’d stepped into the Twilight Zone. And she’d thought her day couldn’t get any worse.

The man dove for the light switch and flipped it off as if that might prevent the chandelier from tugging at the frayed cord until it snapped. Too late. Glass and metal crashed to the floor, splashing water across the room.

Where had the water come from? Christina wiped a droplet from her face and squinted toward the spot the chandelier had landed. The large dark circle on the rug was actually a puddle. And the dripping sound she’d heard had come from a small waterfall now pouring out the hole in the ceiling.

She gasped and covered her mouth with her hands. She’d walked in on the man trying to fix a leak, and she’d made it worse by involving electricity.

“I’m going to need some help.” The man grunted. “Where’s your husband?”

Oh no. She’d helped destroy his front room, and she alone was going to have to help him fix it. Her eyes started to experience a leak of their own. She blinked away tears and lowered her hands to whisper. “I didn’t get married.”

The edges of his lips curved up like he wanted to laugh. He didn’t, but she still felt the judgement. Or was she just being sensitive? It didn’t really matter what this stranger thought. She was going to be fine. Eventually. For now, she’d pretend.

She straightened like a soldier. “What can I do to help?”

She could do that. She couldn’t handle any more thoughts of her bleak future or her father’s disappointment or the loneliness without Mom, but she could yell when the water shut off. She nodded, lifted her skirt, and ran up the stairs, relieved the guy hadn’t gotten angry at her. Because then she would really have lost it.

Steam poured from the bathroom door like she was dealing with a volcanic geyser rather than a busted pipe. She surveyed the problem and squatted down to get a better look at the spot underneath the sink from where water spurted. It truly was a pretty bathroom. She’d never seen a claw foot tub in real life before. And those octagonal white tiles on the floor looked to be authentic for the time period. Would they have to be ripped out to repair the water damage? At least that part wouldn’t be her fault.

The stream of water sputtered. Slowed to a trickle. Dried up.

“It’s off,” she called. Could the manager hear her? The place was huge and she didn’t know exactly where he’d gone.

She listened for a response. Nothing.

She eyed the pipes one more time. They were still off, but if the manager didn’t know he’d succeeded in his endeavor, he might keep turning knobs and get it started again. She gathered her skirt to head down the staircase like a character from Gone with the Wind. She wished she’d changed before leaving the wedding. The bed and breakfast manager hadn’t said anything about her being a runaway bride, but he seemed to find it amusing. She was like the punchline in a cruel joke. 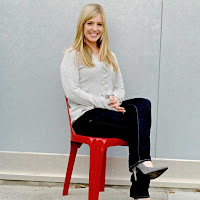 Angela Ruth Strong studied journalism at the University of Oregon and published her first novel, Love Finds You in Sun Valley, Idaho, in 2010. With movie producers interested in her book, she's decided to re-release it and write sequels as a new series titled Resort to Love.

~*~
Buy Angela's book on Amazon or Barnes and Noble

~*~
Enter this book giveaway contest for your chance to WIN a copy of this book by filling out the entry form on the Rafflecopter widget below: SaveSaveSaveSave

a Rafflecopter giveaway
Posted by Alexis at Sunday, August 13, 2017