Welcome my friend Dawn Kinzer to the blog today. She's written this lovely story called Hope's Design and wants to give YOU a FREE copy of it! Details on the book giveaway contest are toward the end of this blog post.

But before you enter the book giveaway contest, take the time to read the blurb of Dawn's book and read my interview with the lead female character in Hope's Design. Her name is Hope. Isn't that perfect?

~*~
Blurb for Hope's Design (book): In 1904, Hope Andrews, an aspiring fashion designer, struggles with leaving New York City. But with no job, her parents leaving the country, and an abusive ex-fiancé refusing to accept their broken engagement, Hope doesn’t have much choice but to give into her parents’ wishes that she move far away and live with her cousin indefinitely. 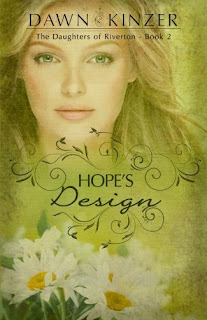 Talented Benjamin Greene can’t deny his passion for painting, but guilt over a painful incident in his past keeps him from sharing his gift. Instead, he devotes much of his days to helping his younger sibling rebuild a farm inherited from a great-uncle. Only his brother is aware that Ben spends his spare time in a studio on their property.
In the small rural town of Riverton, Wisconsin, Hope and Ben can’t help but be thrown together. But as feelings for each other deepen, tension thickens over how talent should be used. Their mutual passion for art brings them together, but will it also drive them apart?

Alexis: Good day, Hope! How are you today? Are you ready for the interview?


Hope: Hello! It’s such a beautiful spring day, I feel inspired to take my sketch pad outside. But, first the interview. Yes, I’m ready!

Alexis: When the reader first meets you, you’re on a train. Where are you headed and why?

Hope: My journey took me to a small farming community in Wisconsin called Riverton. It’s quite a change from my life in New York City. But, my father left for several years to work on the Panama Canal with the Army Corp of Engineers, and my mother decided to go with him. She has a heart for the families who have joined their husbands and fathers there, and she wants to serve wherever she can. I was planning on marrying Henry Shelton, a prominent lawyer, but when I realized he was controlling and abusive, I broke off the engagement. Unfortunately, he didn’t take it well. My parents have been concerned about my safety while they’re out of the country, and they asked me to stay with my cousin in Riverton.

Alexis: One of the first things we find out about you in Chapter One is that you’re ambitious and want more than marriage and children. You want a career, preferably in fashion design. How did you feel about your friends who were all married in their 20s and bore children, not being able to understand your ambitions?

Hope: I truly support their desires to be wives and mothers. It’s certainly something I want for myself, but I also feel that God wants me to use whatever creative talent he’s given me. It saddens me when friends can’t understand my need for more. Besides finding a way to feed that creative part of me, I’ve always had an independent nature. I believe if I can find a way to financially take care of myself, a marriage will feel more like a partnership.

Alexis: Why is it your dream to be a fashion designer?

Hope: I’ve always found great joy in drawing and painting since I was a young child. But, my art teachers wanted me to paint like the great artists. It just wasn’t in me. I slowly realized that I could look at a woman’s shape and see how a style might suit her. It all came together for me one day when I helped two neighbors. One girl was quite thin and the other was . . . well, heavier looking. Neither thought themselves pretty, and they’d become reclusive. They were so delighted with what I created—dresses that flattered their shapes—that I knew then what I was supposed to do with my life. Design clothes that helped women feel pretty on the outside so they could feel confident enough to show how beautiful they are inside.

Alexis: I’m sorry to hear that your ex-fiance was abusive toward you. How did you get the courage to end your engagement? Now that you’ve left him behind, what are you moving forward to?

Hope: I credit my parents for giving me the strength to leave that relationship. Although they didn’t know about the abuse until after I’d broken off the engagement, they’d instilled in me a sense of worth and the right to be respected. Leaving Henry has given me the freedom to focus on my own dreams—something he never supported.

Alexis: Who was your closest confidant when you were trying to heal from your abusive relationship? Why did you choose to confide in this person, and how did they help you?

Hope: After my parents, I told my closest friend, Charlotte Ransom, about Henry’s hurtful behaviors. At first, I was embarrassed by the fact that I was taken in by his charm and then had allowed the abuse to go on for as long as I had. My friends thought he was quite a catch. After all, he’s a handsome lawyer with a prestigious firm, and he’s quite popular in high society. I confided in Charlotte so she would understand why I left that relationship and why my location needed to be kept a secret from him. Of course I confided in my cousin, Annie, in Riverton. Both women helped me by being loving and understanding—and believing me.

Alexis: How did your abusive relationship with your ex-fiance affect your mind and heart? Did it hold you back when you first met the swoon-worthy hero of this story, Benjamin Greene?

Hope: After being in a bad relationship, I think it’s difficult for most women to trust men again. Although attracted to Ben, I was also guarded. It wasn’t easy for me to open my heart to him.

Alexis: What is it about Benjamin that draws you to him? Is there anything about him that you do not like?

Hope: From the moment we met, his gorgeous blue eyes mesmerized me. Ben is quiet, but when he speaks, what he relays has meaning. He’s introspective, and he feels deeply. As a Christian woman, it’s attractive to see a man who embraces his faith, but who also struggles with it. To me, it shows that he wants to learn and grow—and be in relationship with his Lord. Ben’s artistic ability draws me to him. His paintings are some of the most beautiful I’ve seen, and they touch my heart in ways that’s difficult to explain.

As for what I don’t like . . . It frustrates me when he has a hard time believing in his great talent, and it makes me crazy when he’s tempted to hide his artistic gift from the world.

Alexis: Benjamin loves painting and you love drawing. They say that it’s not a good idea for two artists to be romantically involved with each other. Do you agree or disagree? Explain.

Hope: There are definitely pros and cons. Sometimes only an artist is able to understand the mind and heart of another artist. On the other hand, artistic people are also sensitive, and it can be difficult to hear and accept constructive criticism from someone who thinks they know better. People involved in a romantic relationship or a friendship also have to be careful about not getting too competitive. Because Ben and I focus our talents in different areas, we may find it easier to be supportive of each other than if we were both painters or designers.

Alexis: As a reader, I inferred that Benjamin is a family man who loves helping people in need. When you first learned that he spent much of his time helping his younger sibling rebuild a farm that was an inheritance from a great-uncle, how did you feel? Why?

Hope: The fact that Ben was so loyal to his family and friends warmed my heart. It also showed me how self-sacrificing he could be for someone he cared about. I can respect and love a man like that.

Alexis: The small rural town of Riverton, Wisconsin, is the setting for your story. What do you love about that town? Is there anything you do not like about it? Explain.

Hope: Riverton is a peaceful, pretty town, with a wonderful community spirit. At times, it’s been surprising to see how caring the farmers and townspeople are and how they rally support when someone needs help. However, it’s difficult getting used to having much of your life exposed. Maybe it’s not true, but sometimes it feels like everyone in town seems to know what’s going on in other households. You can’t hide in a crowd like you can in a large city.

Alexis: As a woman of faith, how does your belief in God affect your life story as you endeavor to follow your dreams?

Hope: It’s so important to me that I use my talents to serve God. I think we’re accountable to use our gifts and not waste them. Even though my desire is to create beautiful clothing designs, I strive to seek God’s design for my life. Because I believe I’m on the right path, I try not to let failure discourage me to the point of quitting. Instead, I try to trust God’s timing, and I keep working at getting better at my craft so I’ll be ready when the door to opportunity opens.

Alexis: Thanks for the interview, Hope! God bless you.

Hope: Thank you for having me as your guest! 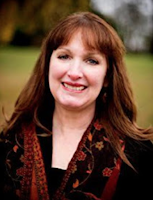 Dawn Kinzer writes fiction because she believes in the power of story to comfort, challenge, and inspire.

Her work has been published in the Christian Fiction Online Magazine, Backyard Friends (magazine), The One Year Life Verse Devotional, A Joyful Heart: Experiencing the Light of His Love, and featured on the radio ministry, "The Heartbeat of the Home".

Dawn’s historical romance series, The Daughters of Riverton, takes place in the early 1900s. The setting and some of the characters were inspired by her rural Wisconsin hometown. Sarah’s Smile is the first story in the series, and Hope’s Design is the second. A third novel, Rebecca’s Song, will be released in 2017.


A mother and grandmother, Dawn lives with her husband in the beautiful Pacific Northwest. Favorite things that she loves include dark chocolate, cinnamon, popcorn, strong coffee, good wine, the mountains, family time, and Masterpiece Theatre.

a Rafflecopter giveaway
Posted by Alexis at Thursday, April 27, 2017