Greetings, dear blog readers! How are you? Please welcome a familiar face to the blog today! Kimberly Rose Johnson is here to talk about her new novel, Island Hope. Here are all the sweet details, starting with the book cover: 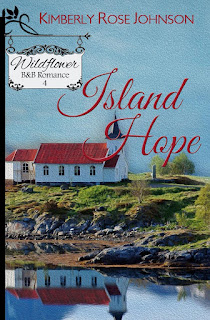 
Metal sculptor Hope Michaels gave up on art when her creativity was zapped by another. Burying herself in her electrical contracting business, Hope takes a job on Wildflower Island. She never imagines that a job at the Wildflower Resort will turn everything in her life upside down. But that’s exactly what happens when her best friend and employer, Piper, plays matchmaker.

A lonely widower throws all his energy into raising his teenage daughter, but when he is promoted to manager of the Wildflower Resort, things at home don’t go as smoothly as planned. Worried about his relationship with his daughter, he seeks advice from a feisty-but-sweet newcomer. Will she help smooth his path or will things only get more complicated?

~*~
Sounds like a good book, right? Would you like to know more? Read on for my interview with Kimberly Rose Johnson.

*Words from Alexis are in bold, words from Kimberly are not in bold

Alexis: Island Hope is Book 4 in your Wildflower B&B Romance series. What makes it special?

Kimberly: For me it’s that it’s the final book in the series. We see what is going on in the lives of each of the hero and heroines of earlier books and it wraps their stories up.

Hope Michaels is your heroine. What is the significance of her story?

She is a strong woman with a soft heart. I love the dichotomy of her appearance compared to who she is on the inside.

What brings Hope to Wildflower Island?

Hope comes to Wildflower to do some electrical work at the resort.

What is Hope’s relationship with Piper? Share their backstory and describe their bond.

Why does Piper decide to play matchmaker with Hope and how does Piper’s matchmaking turn Hope’s life “upside down”?

I think Piper plays matchmaker because she wants her friend to find love too. As far as turning it upside down, I think the readers need to find that out for themselves.

Who is the “lonely widower” in this story? Why did you make him the hero?

Derrick Trainor is the brother of the manager at the B&B. We first met him very briefly in Island Christmas, but there was something about him that made me want to develop his character and give him his own story.

Derrick’s wife died in a car accident. His daughter is a great girl, but she’s gotten to a stage in her life where he feels inadequate. He’s not ready for her to have a boyfriend and doesn’t know how to deal with all the emotions his daughter is projecting.

What is Hope’s first impression of the lonely widower? Is it a lasting impression? Explain.

At first she resents him and when she finds out that her friend is trying to set her up with Derrick she quits. That’s all I’m going to tell you. I don’t want to ruin the story for anyone.

Why did you write Island Hope?

At its core, I wrote it because my publisher really wanted a fourth book in the series. But I don’t think I was ready to let go of the characters on the island and like I mentioned before, I wanted to tell Derrick’s story.

What inspired you to create these characters?

I wanted an out-of-the-box female character and I pairing her with a “normal” guy was fun. I enjoyed the challenge these characters presented.

What do you want your readers to take away from this book?

In the opening of the story, Piper warns Derrick to not judge a book by its cover. I hope this story will encourage people to look beyond appearances and see the people for who they really are. There are some spiritual takeaways as well, but I like to allow readers to form their own opinions regarding the spiritual takeaway.

When I wrote “the end” to Island Hope, I felt happy and relieved because I was under a tight deadline. At the same time it was bittersweet because it was the final book in the series. I will miss these characters.

Kimberly Rose Johnson, soon to be empty-nester, lives in the Pacific Northwest with her husband and their yellow lab.

Island Refuge is her sixth published book and the first in a series of three.

Kimberly enjoys long walks, chocolate, and mochas, not necessarily in that order.

~*~
WIN fun freebies by visiting the Rafflecopter giveaway with Kimberly's name on it. Here's the direct link, http://www.rafflecopter.com/rafl/display/1ffcd6d01/
Posted by Alexis at Monday, February 15, 2016