Welcome Juan-Jose to the blog! He works as an author and spends time tutoring school age children and youth.

Today, he's here to share a story from his youth. Juan would like to tell you how nearly drowning in six-foot-deep water led him to believing in Jesus Christ as his Savior. Curious to find out why or better yet how? Read on to discover the answers your questions! :)

A Falling in Love with Jesus story written by Juan-Jose D. Garza

For years, as Luke Skywalker was hungry to know about the Force in the Star Wars fictional universe, I wanted to know what were God and His love. I wanted to have my own experiences. My mother was a church musician and most of my family was church people, especially my Uncle Ronald.

“God loves you,” Uncle Ronald would tell me, regularly, though I never believed him. “All you have to do is call His name and you can do anything. Just ask, and His angels will arrive.”

As a kid, I would ask all of the clergy at the different churches my mother played for whether or not it worked the way my uncle suggested, but every time I inquired, I never got an answer that had any substance. My mother saw me ask these adults questions, and she told me, “Just call on His name. He loves you, but you just need to believe as you get older.”

When summer 1995 arrived, I was allowed to go to the big kid pool in the summer program I attended. Knowing the third-grade would meet me later that September, no one could tell me that I had not crossed that coming of age threshold. This was an important trip because I was not escorted as a toddler by my mother. At the time, this neighborhood was new for me, so I was not comfortable, but I knew I would not voice any opposition. For that opposition would result in this great moment to be over with.

The sponsor looked at the collective whole, and inquired whether we all knew how swim. Before this date, my last remembered experience in a swimming pool was five years previous, and before that experience, I was held in my mother’s arms. So, like my companions, I agreed that I knew how to swim (though my heart screamed that I did not.).

Similar to now, all of my friends were taller than me. So as they moved further away from me, I wanted to catch up to them, but as each step was placed, I was met with more water touching my head. Flexing to show its superiority, the pool’s water held me down. My feet would touch the bottom. I propelled myself upward, attempting to imitate Superman, but as I rose above the water in what felt like adequate time to scream “Help Me!” I now know it was seconds. Three times this occurred, and each time I was more exhausted than previous attempts. There was no hope. For no one who was once near me, was there for my aid, and the last thing I said, as my eyes saw the number six directly in front of me, was, “Jesus, help me!”

“Garza? Garza! Garza!!!” screamed our sponsor, standing over me. “Get up! What were you doing in the six-foot section?”

Coughing, my eyes opened. I was met by our sponsor, teenage aides, and every eye who was in the pool. Smiles of relief acknowledged me. From my perspective, I knew only seconds had passed, but I could see long-suffering’s stress and fear litter their faces.

“Welcome back, Mr. Garza,” the sponsor told me, as I stood from the pool’s side. “You scared us.”

“I told you I could swim,” I said, as my legs wobbled like a newborn horse. “Let’s go swimming.”

“Yeah, right, Garza. You’re supposed to be gone, but it’s like you got angels working for you. You better thank God.”

From that moment on, my life was different. I knew that God loved me, and was forever watching me. For Psalms 91:11 says, “For he shall give his angels charge over thee, to keep thee in all thy ways.” And ever since, I fell in love with Jesus because he loved me first. 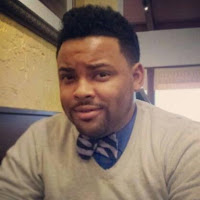 Juan-Jose D. Garza is a fifth-generation Washingtonian. He is a graduate of Washington Adventist University, where he studied journalism, political science, and earned a Masters in Business Administration.

He has written numerous feature articles and inspirational pieces for over a dozen print and online publications, tutors children ages four to 17, serves as a church drummer and worked, volunteered, and consulted for over 20 political campaigns.

Most recently, under his pen name Zay Heron, he has authored three novels previously, as his newest, An Erratum, will be available December 1.
Posted by Alexis at Friday, October 16, 2015