Let's welcome a familiar face back to the blog today: Kimberly Rose Johnson!

She's visiting today to celebrate the release of Island Dreams, her second book in the Wildflower B&B Romance series! Today is the release date so you can buy it on Amazon.com tonight if you wish!

Here's a picture of the cover to Kimberly's new book: 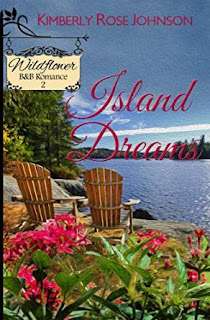 So without further ado, on to the author interview...

(Words by Alexis in bold, words from Kimberly not in bold)

~*~
Alexis: What inspired you to write Island Dreams, the second story in your Wildflower B&B Romance Series?

Kimberly: Honestly, there was nothing in particular like there was with Island Refuge. I knew I wanted to write a series, so brainstormed with my husband. We came up with the premise for the story together.

Piper Hunt is the leading lady in your book Island Dreams. She has quite a cute name! How did you create it? Tell us what makes Piper beautiful. What motivates Piper? Why does she find herself on Wildflower Island?

I’m so glad you asked about Piper’s name. It’s the not first time I’ve used it, but that manuscript was never published. I LOVE this name and knew I wanted to use it. I first learned of the name from TV. An actress who I like is named Piper. Then I met a lady on Twitter named Piper and told her someday I would give a character that name.

Piper is not beautiful in the classic sense of the word, but on the inside she is. She loves her family, even though they sometimes hurt and frustrate her. She cares about people and nature and she is an all around nice person. LOL that being said, she has her moments.

Piper is motivated to succeed because she feels like she has something to prove. She ends up on Wildflower Island because her family owns a great deal of property there. Her dad owns a development company and he has decided after holding onto the property for 35 years, it’s time to develop it.

In your book summary, you noted that Piper is trying to prove her worth to her father. Why? Share the backstory.

Piper’s dad is a workaholic and the only way she knows to be a part of his life is to follow in his footsteps, but when she makes a couple critical errors, her dad doubts her. She wants to prove she is a valuable asset to the family company and not a liability.

Chase Grayson is your leading man and with a name like that he must be hot. Am I right? Describe Chase’s looks, character, motivation, flaws and strengths.

Yes, Chase is a good looking man. He’s tall, muscled and an outdoorsy kind of guy. He’s a landscape architect and likes to get his hands dirty too. So it’s not unusual to see him working side-by-side with his workers on the job. Chase loves the peace and quiet of the island. He doesn’t want to see the feel of the island change and Piper’s plan threatens to destroy the place he loves most—Wildflower Island. He’s a stubborn and passionate man, but he admits when he’s wrong.

The thing that bothers Piper most about Chase is that he tries to stop her from doing her job. At the same time she likes him because he’s genuinely a nice guy and in spite of not supporting her plan, he tires to see things from her perspective.

Why does Chase live on Wildflower Island? What does he love most about it? Is there anything about the island that he does not like?

Chase lives on the island because he craves peace and quiet. It’s his escape from city life. I know I sound redundant, but what he loves the most is the peace and quiet. The island has a pace of it’s own—slow, and it hasn’t kept up with the times. There is still an old fashioned general store and the place operates like it may have 100 years ago, but with all of life’s conveniences.

Why doesn’t Chase like the idea of Piper building an upscale resort on his island?

Chase believes that a resort will bring a lot of tourists to the small island and destroy what he loves most—the peace and quiet. To make matters worse, the property to be developed abuts his.

Chase and Piper may be at odds when the reader first meets them but it’s obvious they’re experiencing a growing attraction to each other. As the author, share a glimpse into their minds. What are they thinking?

Piper can’t figure Chase out. He clearly doesn’t want the resort on the island, but he’s willing to help due process along and even sets up a meeting with the town council for her to pitch her idea to them.

Although Chase is against the resort, he sees how much it means to Piper and that she truly loves the land. She even went so far as to scale back the plans to better fit the island. He appreciates her obvious love of the island, but is torn between wanting everything to stay the same and accepting progress. He wants Piper to stick around, but if he succeeds and stops the development, she will be out of his life forever and if he fails, the island will never be the same.

Why does Chase feel that if Piper builds her resort, his life will be “altered forever”?

A resort will change the island. Wildflower pretty much lives in the past. There are few modern buildings or businesses. People take the ferry to the mainland if they need something other than the basics. For the most part the island is undeveloped and since Piper’s family owns half the island, a resort would dramatically alter the landscape and personality of Wildflower Island in his opinion. His quiet escape from the city would no longer be the same, especially since her property is next to his.

Now for the classic question: Can Chase live without Piper? Can Piper live without Chase? Explain as much as you can without giving away the story.

Yes, they can live without one another, but they don’t want to. That’s all I’m saying.

What did you enjoy most about birthing this book?

I tried something different with this book and included two additional points of view. I included Nick and Zoe from Island Refuge. It was a lot of fun to bring them into this story and continue to follow their love story.

If you could spend one hour with Piper or Chase, who would you choose and why? Explain what you’d do with that time.

Nothing against Chase, but I’d choose Piper. She is such a strong woman, I think it would be fun to just listen to her talk shop. I think she would be inspiring.

What’s next in the Wildflower Island B&B Romance Series?

Island Christmas, the final book in the series releases in October. I’m very excited about this story as the series comes full circle when Rachel Narrelli from Island Refuge returns to the island. 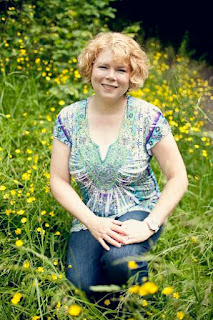 Kimberly Rose Johnson, soon to be empty-nester, lives in the Pacific Northwest with her husband and their yellow lab. Island Refuge is her sixth published book and the first in a series of three. Kimberly enjoys long walks, chocolate, and mochas, not necessarily in that order.