Love is in the Air: Author interview with Johnnie Alexander

Today's featured author, Johnnie Alexander, will give away one copy of her e-book Where Treasure Hides to the person who wins the book giveaway contest! See the Rafflecopter widget at the end of this blog post to enter the contest.


Join me as I talk with Ms. Alexander about her real-life story and her passion for writing historical and contemporary romance!

Alexis: How did you get your start as a writer? Take us from the time you “knew” this is what you were called to do and end at how you got your first book deal.

Johnnie: I think I always knew, but fear and ignorance plus family, work, and grad school kept me from following my dream. Then in 2003, I participated in NaNoWriMo (National Novel Writing Month) and learned how much I really loved writing a story. It didn’t matter that it was a mess and didn’t resolve itself in a probable way. I had developed characters, a setting, and written a few scenes with impressive dialogue. Still the days flew by until I attended my first major writing conference in 2007 with a proposal that went nowhere.

Time ticked by. I joined two critique groups and studied craft. I learned about show, don’t tell and other important elements. Though I had (and still have) stumbles, editors began showing interest in my work, I signed with my agent, and I won a few conference awards. In 2011, Where Treasure Hides won the American Christian Fiction Writers Genesis Contest for historical fiction. A little over a year later, Tyndale published it as an e-book for their Digital First program. It releases as a print edition in August.

Why do you write historical and contemporary romance?

New writers are usually advised to establish themselves in one genre, but God has other plans for my writing journey. After Where Treasure Hides was released, Tyndale asked if I had a contemporary. I pulled up a file I’d played with off-and-on over the years, wrote a proposal, and polished the manuscript.

Tyndale passed on it, but Revell said yes! I signed a three-book contract with them for a series called Misty Willow. The first book, Where She Belongs, releases in January 2016.

Tell us about your book Where Treasure Hides. What is it about? Who are your main characters and what are their struggles?

Dutch-American artist Alison Schuyler lives in Rotterdam, Holland with her grandfather who owns the family’s art gallery. While in London, she meets British Army officer Ian Devlin after he protects a Kindertransport boy at Waterloo Station and she draws a sketch of the two of them.

Though the attraction between them is instant, Europe is on the edge of war. August 1939 is not a good time for romance. Circumstances bring them back together but Ian is recalled to duty when England declares war on Germany.

Alison assists her father in protecting Dutch art from the Nazi looters while Ian is wounded and captured at Dunkirk. She’s almost glad he’s a POW—at least he’s out of the war. But Ian chafes under the confinement and eventually escapes.

As the story unfolds, Alison and Ian are reunited then torn apart again. Will they ever find the happiness that eludes them? You’ll have to read the story to find out!

On your website next to the book cover for Where Treasure Hides is a photo of another book in another language. Tell us about it.

Waar Liefde Woont, translated Where Love Lives, is the Dutch edition of Where Treasure Hides. Marian Baay, a freelance editor for Dutch publisher Uitgeverij Kok, read the novel, loved it, and recommended it for translation.

Though the book opens at Waterloo Station in London, England, the setting then moves to Alison’s home and family art gallery in Rotterdam, Holland for a time. Later, we’re with Ian in France and Germany, then again in England, then back in Germany. (The characters travel around in this story.)

If you could spend a day with your favorite character from Where Treasure Hides, who would you spend the time with and what would you two do?

I would love for Ian to give me a tour of his family estate. Though not as grand as Downton Abbey, Ian’s home has been in the family for centuries. I’d love to see the hidden corners, the art, and any secrets it held. After that, we could take a boat ride to the giant boulder known as the Giant’s Hand where he likes to sit and think.

Describe your writing space. What makes it special to you?

I usually write at the kitchen table. It’s set in a nook with tall windows in two walls which gives me great views of trees. Sometimes a cat meanders past, and lately our two guineas and a few chickens have made their way down here from the pasture. Last summer, I could write and watch our alpacas “mow” the yard.

How does your faith in God play into your storytelling?

I think there are two answers to this question. Alison and Ian are both Christians, but Alison particularly struggles with placing her trust fully into God’s hands. Her favorite verse, and one she holds on to, is also one of mine: “Strength and dignity are her clothing, and she smiles at the future” (Proverbs 31:25 NASB).

The second aspect is the faith it takes to spend years writing a book that may only be read by family and friends. I had to be fine with that, with finding joy in the creative process and in indulging my imagination no matter the outcome.

There’s actually a third answer—the faith that God will give me what I need to do it again. As thrilling as it is to have a contract for two more contemporaries, it’s also scary. There are deadlines to meet. Expectations to fulfill. But God is faithful. I’m writing the series second novel now, and day-by-day it’s taking shape.

Who is your favorite Christian author and which of their books do you love the most? Explain why.

It’s so hard to choose a favorite though I like Ann Tatlock, Jane Kirkpatrick, and Davis Bunn for the depth of their stories. I recently read Snow on the Tulips by Liz Tolsma which is a powerful and beautifully written novel. Her parallelism with the Biblical book of Esther added an inspiring layer to an already engaging story.

Begin now for the journey may be long. Attend conferences, find encouraging and competent critique partners, and enter contests for the feedback you’ll receive.

What is your greatest dream for your writing career?

I’d love to see one of my novels made into a movie. Wouldn’t we all?

Truly, though, I’m not seeking fame nor fortune. My dream is to write stories that linger in the reader’s heart long after she closes the last page.

Since moving to Tennessee a little over a year ago, my favorite vacation spot is where the kids are—one in Ohio and two in Florida. However, I’m also very fond of the Blue Ridge. And I dream of traveling to Europe.

My two daughters and my son are all grown up. The girls are married with little ones of their own. One has three boys; the other has two girls. We love movie marathons, playing games, and going to Pizza Hut buffet after a morning’s work is done. One of our favorite things is to make memories together.

We also have a group text thread. I just love it when my phone repeatedly dings because I know the kids are having a conversation. So fun.

I love “Florida season.” I lived in the Orlando area for over twenty years. I rarely knew for sure what month it was. And what fun to be surprised by the snowy photos friends posted on Facebook because I’d forgotten it was winter up north.

Here in Tennessee, I love coming in to a cozy house after doing morning chores and relishing the heat from the fireplace. Now that the weather is getting warmer, I delight in the daffodils popping up in the yard. And one tree outside the kitchen window displays pink tulip-shaped blooms on its branches. Just lovely.

As a writer and woman of faith, what do you want your legacy to be?

Being remembered as a Christian who endeavored to glorify God in all she did is a given. Beyond that, I want to be remembered by my family and friends as someone who created memories with those she loved.

Thanks for the interview, Johnnie! If you’d like to do a book giveaway, please leave a question for my readers to answer.

Book Giveaway Question: My dream of a European trip is coming true. Even better, you’re coming with me! What’s your one “must-see”?

Johnnie Alexander writes inspiring stories that linger in the heart. Where Treasure Hides, her debut novel, won the ACFW Genesis Contest (2011) and Golden Leaf Award (2014). The first of her three contemporary romances, Where She Belongs (Misty Willow Series), releases from Revell in January 2016.

A graduate of Rollins College (Orlando) with a Master of Liberal Studies degree, Johnnie treasures family memories, classic movies, road trips, and stacks of books. She lives in the Memphis area where her morning chores include feeding dogs, cats, chickens, and a small herd of alpacas. 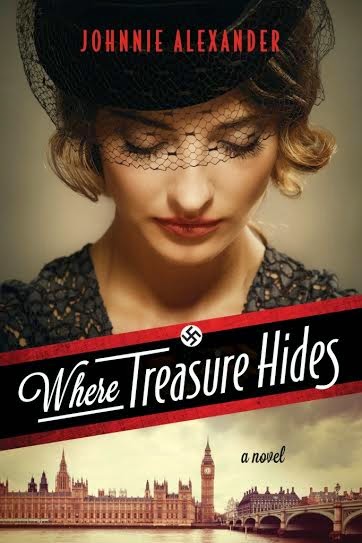 Artist Alison Schuyler spends her time working in her family’s renowned art gallery, determined to avoid the curse that has followed the Schuyler clan from the Netherlands to America and back again. She’s certain that true love will only lead to tragedy—that is, until a chance meeting at Waterloo station brings Ian Devlin into her life.

Drawn to the bold and compassionate British Army captain, Alison begins to question her fear of love as World War II breaks out, separating the two and drawing each into their own battles. While Ian fights for freedom on the battlefield, Alison works with the Dutch Underground to find a safe haven for Jewish children and priceless pieces of art alike. But safety is a luxury war does not allow.

As time, war, and human will struggle to keep them apart, will Alison and Ian have the faith to fight for their love, or is it their fate to be separated forever?