Welcome Paula Mowery to the blog today! She's a wife to a pastor, mom to a college student, editor and author! Today, she is gladly giving away a free e-copy of her Christmas story, Love Again! Here's the cover photo for Paula's book: 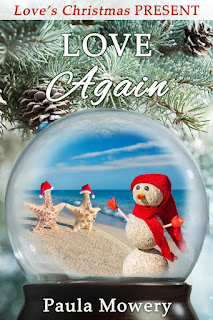 You can enter the book giveaway contest by filling out the form on the Rafflecopter widget below:
a Rafflecopter giveaway Now enjoy getting to know Paula, the author of Love Again!

*Words by Alexis are in bold, words from Paula are not in bold:

Alexis: Love Again is a Christian romance story. What message are you hoping to convey to your readers through this book?

Paula: God is there when we experience loss in our lives, and He can even bring opportunity for a second chance at love. Things that we might see as setbacks might really be set-ups from God.

Ben is a soldier who’s returned from his duty overseas to raise his children after his wife dies in a car accident. What—or who—was your inspiration for this character? Describe Ben’s personality, strength and flaws.

A few years ago my family was vacationing in Myrtle Beach. We love seafood, so we went to a local seafood restaurant. Our waiter was very kind and my hubby asked him a few questions about how he came to be working there. This was his story. His wife had been killed in a car accident and he gave up his career in the military to come home and raise his children. His story sparked the writer in me and I immediately started penning the story of Ben. The character, Ben, is determined and yet conflicted by his grief, which he has never really dealt with since losing the love of his life. He says he wants to move on and make a life for his children, but he deals with memories and guilt of whether he should know happiness or even love again.

Who is Jenna and how does she inspire Ben to “love again”? Give us insight into Jenna’s personality, hopes, dreams and life skills.

Jenna is fulfilling the calling and desire of her heart by coming to a church in Myrtle Beach to be their new children’s minister.

Her only knowledge of love has been a distracted and mostly self-centered Peter, who doesn’t understand her calling. Jenna moves to Myrtle Beach and moves in with her former roommate from Liberty University. Jenna meets Ben and his daughter at church and then again in the church’s daycare program. Jenna feels attracted to Ben but doesn’t know if she can compete with the memory of his wife.

Who was Jenna’s ex-boyfriend and why did she break up with him with no regrets?

As mentioned above, Jenna’s ex-boyfriend is Peter. He is self-absorbed in that he can’t even put down his cell phone to have dinner with her. Then he is demanding in that he assumes that she will not work and just be his wife. He degrades her calling from God. She finally sees Peter doesn’t love her but the person he wants her to be for him and his business.

What is it about Ben and Jenna that instantly draws them to each other?

The first draw is Ben’s daughter. Jenna knows just how to calm Avery’s nerves when starting the children’s weekday program. Ben is intrigued by how Jenna handles herself and also relieved with the help she gives with Avery.

What was the most challenging part of writing this story?

The most challenging part was to make sure I was true to how Ben would feel losing his wife, someone he truly loved. I wanted to show the tug-o-war going on in his heart. But I also wanted to make sure it was the male perspective.

What did you love the most about creating Love Again?

Personally, I like a story of a second chance at love. And I have no idea what happened to the real Ben - the waiter. I suppose I hoped he got his happy ending with love again too.

What do you want your readers to cherish most about Love Again?

I hope they’ll cherish the fact that God wants to lead us in our lives. Just as Jeremiah 29:11 says, He doesn’t want to harm us. He wants to give us a future and a hope.

What do you love the most about penning Christmas stories? Why?

I will have to admit that I haven’t written many holiday type stories. I can speak for this one only. Love Again didn’t have an ending. When my publisher created this Christmas series, I remembered Love Again and knew that ending at Christmas time would round out the story perfectly.

Will you write more Christmas stories in the next years? If so, can you give us a glimpse into what it’s about and when your book(s) will be available for purchase?

I don’t have a Christmas stories in the works right now, but I’m certainly open to being included in a series of this sort again.

I do have a book coming out at the end of April that is in another series from Prism Book Group. The first of this series which is called Love Is will release around Valentines Day. These books are based on The Love Chapter, First Corinthians thirteen from the Bible. My book is based on the part of the passage that states that love does not dishonor. The name of that book is The Crux of Honor.

Thanks so much for letting me share about this story. I hope readers will enjoy reading Ben and Jenna’s story as much as I enjoyed creating it.

Paula Mowery is a published author, acquisitions editor, and speaker. Her first two published works were The Blessing Seer and Be The Blessing from Pelican Book Group. Both are women’s fiction, and their themes have been the topics of speaking engagements.

Be The Blessing won the Selah Award in 2014 in the novella category. In November of 2013, her first romance released in the anthology, Brave New Century, from Prism Book Group. This book went to number five on Amazon’s bestseller category, historical Christian romance. Legacy and Love was her first solo romance and was a finalist in the Carolyn Readers Choice Awards in 2015.

Reviewers of her writing characterize it as “thundering with emotion.” Her articles have appeared in Woman’s World, The Christian Online Magazine, and the multi-author devotional blog, Full Flavored Living. She wrote a section for Join the Insanity by Rhonda Rhea. She has devotionals included in several collaborative books.

As an acquisitions editor for Prism Book Group, Paula particularly looks for romance stories with Christian values at its core. She’s especially attracted to those manuscripts that leave the reader mulling over the story long after turning the last page.

Having been an avid reader of Christian fiction, she now puts that love to use by writing book reviews. She is a member of ACFW and is on the author interview team. She was a member of the 2014 and 2015 Blue Ridge Mountains Christian Writers Conference faculty.

Paula is a pastor’s wife and mom to a college student. She homeschooled her daughter through all twelve years, and they both lived to tell about it. Before educating her daughter at home, she was an English teacher in public school.

~*~
Book blurb for Love Again: Ben Jacobsen never thought he would find himself leaving his role as a soldier and living his life without his beloved wife. But, his two young children need a present parent.

Jenna Campbell moves to Myrtle Beach to take a Children’s Minister position, much to the disbelief of her boyfriend, Peter Callahan.

Through helping Ben’s daughter adjust to the church’s daycare, Jenna is taken by Ben Jacobsen. The feeling is mutual except Ben worries he is betraying his deceased wife.

Can Ben find a way to love again? Will Jenna remain in Myrtle Beach and give love a chance?
~*~
Buy Paula's book:
Amazon - http://amzn.to/1QFa0cH