25 Days of Christmas Reads: Interview with Jodie Bailey, author of Quilted by Christmas

Meet novelist Jodie Bailey! She's a North Carolina native who loves coffee, the beach and good books. Today we're featuring her award-winning contemporary romance, Quilted by Christmas, which she agreed to give away for free!

In order to WIN a paperback copy of Jodie's book, enter the book giveaway contest via the Rafflecopter widget below. But first, let's look at this lovely photo of Jodie's book cover! 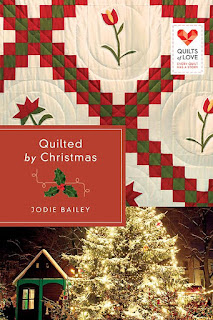 A truly beautiful photo that makes you want to decorate your house for Christmas, isn't it? Remember to enter the contest via the Rafflecopter widget:

*Words by Alexis in bold, words from Jodie are not in bold
~*~

Alexis: Your new novel, Quilted by Christmas is a contemporary romance. What do you love the most about writing in this genre?

Jodie: I love the “freedom” of romance. Generally, I write suspense, and there is a certain expectation and pace to that. With straight romance, I enjoy the focus on relationship, on watching two people grow and battle for (and sometimes against) one another. It’s all about the characters and their pull to one another. Being a character-first kind of girl, I love that! As for this one, I loved watching Justin bring out the “real” Taryn again. She becomes herself around him, the self she’s buried for years. It was so much fun to watch her change.

What was the inspiration for and the meaning behind the title of your book?

That was actually a call by Abingdon. The book was in the Quilts of Love series, and the focus was on the story of the quilt and how it needed to be finished by Christmas… and how it symbolized the re-creation of the relationship between Taryn and Justin. The original quilt is destroyed, and they have to work together to finish a recently discovered, half-finished new quilt. I’m a symbolism girl, and the quilts in the book pack a whole lot of symbolism into their stitches!

Taryn was a challenge to write. She is vulnerable and broken by the choices of others and by her own choices. But she also has an inner strength that helps her overcome. She’s more tenacious than she thinks she is. Taryn loves being alive, and she adores her grandmother. Jemma brings her joy. In fact, everything about being a family brings her joy, but family also brings her the most pain, because hers is so fractured. Because her father dismissed her and because Justin so easily walked away from her so many years ago, she’s pretty certain she just doesn’t have what it takes to be loved. Losing Justin and her actions shortly after that loss cause her enormous pain, so she tries to run and hide. She’s so certain of her unworthiness, she misses the love all around her.

Taryn’s been through a lot with being abandoned by her parents and left behind when her sweetheart went to serve their country. So those are understandable reasons why she “vows to never love again.” But I have a feeling something changes that vow. Want to divulge the details without giving away your story?

Ooh… that’s a tough one. Taryn has believed a lot of lies in her life, and one by one, those lies are stripped away and the truth comes out. Justin is persistent in his friendship with her, in seeing her happy. He’s a hard man for Taryn to ignore. It takes some serious run-ins with unconditional love to make her understand what love really is.

Why does Taryn love the outdoors? Is this story set in the countryside?
Describe the story setting and its role in making Taryn come alive. Taryn was born and raised in the little Blue Ridge Mountain valley town of Hollings, NC. It’s growing as an artsy place, where old-school crafting and town life are blooming. Her family owned a huge apple orchard, and she was always outside as a kid. She’s totally at home on the peaks and in the valleys, and although she doesn’t get to do a lot of roaming in the story, it’s clear that’s where she’s the most alive, especially in one scene, which involves a four-wheeler and a very muddy hunt for the perfect Christmas tree. She finds solace where the people aren’t, because she can be her most authentic self out where she’s alone.

Why does Taryn choose to be a teacher of high school kids? Describe her relationship with her students. Do they love and respect her or give her a run for her money? Explain why.

Taryn was wounded the most when she was a teen, so she has very vivid memories of that time in her life. She holds onto those memories and does her best to see the world through their eyes. Her biggest pains and her biggest mistakes grew out of high school, so she’s determined to use those to help her kids. She’s a mentor to them, someone who loves them no matter what. They respect her and they come to her knowing she’s been there and she’ll tell them straight what they need, and she’ll love them through anything.

Jemma is Taryn’s constant. She has never stopped loving Taryn, ever. She coaxed Taryn through all of the hardest moments of her life, a voice of reason and wisdom. But when it comes out that Jemma made one very big mistake and has kept one very big secret, Taryn has to find her own way to forgiveness and to realize that her grandmother isn’t perfect, but perfection isn’t what it’s all about. Love is. Jemma’s role? She “drives the bus.” That woman is a straight up, take charge meddler, and she’s got her hands all into everything… even from the hospital.

What is an Irish chain quilt? Describe the history and meaning behind it.

I created a history of the quilt for Taryn’s family. For each marriage, the women of the McKenna family hand sew a quilt for the new couple. The quilt serves as a way to link the family together through the generations. The quilt sewn for Taryn’s mother hangs on her bedroom wall, even though her parents’ marriage was a disaster that colored Taryn’s entire life, a symbol of why she herself did something questionable and regrettable out of love. The story begins when Taryn finds an unfinished Irish chain in Jemma’s attic, because there was no bride to go with the quilt. It’s a mystery, but as the book progresses, it’s clear God knows exactly what He’s doing.

How does the quilt-making process help Taryn see her value?

Taryn had one great love in her life, Justin Callahan. One mistake drove them apart, and Taryn compounded that mistake in a way that meant they could never be together again. However, when Justin comes home from the military, he inserts himself into Taryn’s life again. When Jemma is injured and can’t sew the Irish chain for Taryn’s cousin’s upcoming wedding, Taryn has to step in. And Justin keeps showing up to help. His patience, the time they have together where the focus isn’t on them, helps her to heal, to see that love and forgiveness are tied together, even when the hurt may seem unforgiveable.

Is this a love story? Why or why not? I ask because I don’t see a mention of a male lead/hero in your story description.

This is totally a love story. Justin Callahan and Taryn grew up together and fell in love in high school, but they wrecked their own relationship, and Taryn did something she sees as unforgiveable in order to protect him. The problem is, Justin doesn’t know what she did, and when he comes home, he wants to pursue the friendship they used to have. When the feelings grow deeper, Taryn has to deal with her own abandonment issues, her secrets, and Jemma’s mistakes in order to accept Justin’s love. And Justin has to decide if he can forgive Taryn for lying to him for years.

What role does your faith in God play into this story as the author? What can you tell me about the faith of your main characters?

Justin is solid in his faith, but Taryn is a bit shaky. She has to come to understand that God loves her no matter what, that his grace is so much bigger than anything she can imagine. His love… Wow, his love. It’s this all-encompassing thing. I was blessed to have a father totally unlike Taryn’s earthly father, so I understood that God loved me. However, like Taryn, I struggled to find my value. When I finally did, it changed my whole life, just like Taryn.

What do you want readers to treasure the most about Quilted by Christmas?

Jemma, Taryn’s grandmother. She is an amalgamation of both of my grandmothers.

My Nanny is this gentle soul who loves without reservation or condition, and she is a lot of Jemma’s soft side.

My Bopum (grandmother), who had a huge hand in raising me, died the year before I wrote the book, and Jemma gets her hard-headed, fiery, bossy side from her. I grieved a lot in the writing of the book and put a few of my grandmothers’ stories into the narrative. Anyone who knows them has come to me and told me how much of these wonderful women they see in the writing, and that means a lot. So I hope they love Jemma and embrace her. She’s pretty awesome.

Thanks for the interview, Jodie!

Thanks for inviting me!

Jodie Bailey writes novels about freedom and the heroes who fight for it. She is the author of 2015 RT Reviewers Choice Award winner Crossfire, from Love Inspired Suspense, and 2014 Selah Winner and CBA bestseller Quilted by Christmas from Abingdon Press.

She is convinced a camping trip to the beach with her family, a good cup of coffee, and a great book can cure all ills.

Jodie lives in North Carolina with her husband, her daughter, and two dogs.
~*~
Book blurb for Quilted by Christmas: The town of Hollings, North Carolina, nestled in a valley of the Blue Ridge Mountains in North Carolina, is preparing for Christmas. Taryn McKenna, however, is feeling anything but festive. Her grandmother Jemma, the only love in her life since her mother died and her father abandoned her, is facing a medical crisis.

As her cousin’s New Year’s wedding draws near, Jemma asks Taryn to finish the quilt that is traditionally hand sewn for brides in their family. She finds herself reluctantly accepting help from Justin Callahan, the man she would have married…until one mistake cost them more than their relationship. Taryn has a secret that could derail not only Justin’s life, but the life of a total stranger.

When Justin learns the truth, will he continue to stand by Taryn’s side, or will her life unravel one stitch at a time?