Love is in the Air: Becky Wade, inspirational contemporary romance author of "A Love Like Ours" 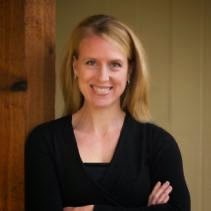 She's the author of these books:

And this one too:

But today, I'm here to share news about Becky's latest book, A Love Like Ours! It's the third book in the Porter Family Novel series, released last week (May 5) and is purely delightful!

So read on and enjoy all this fun information about Becky and her new novel! :)

Former Marine Jake Porter has far deeper scars than the one that marks his face. He struggles with symptoms of PTSD, lives a solitary life, and avoids relationships.

When Lyndie James, Jake’s childhood best friend, lands back in Holley, Texas, Jake cautiously hires her to exercise his Thoroughbreds. Lyndie is tender-hearted, fiercely determined, and afraid of nothing, just like she was as a child. Jake pairs her with Silver Leaf, a horse full of promise but lacking in results, hoping she can solve the mystery of the stallion’s reluctance to run.

Though Jake and Lyndie have grown into very different adults, the bond that existed during their childhood still ties them together. Against Jake’s will, Lyndie’s sparkling, optimistic personality begins to tear down the walls he’s built around his heart. A glimmer of the hope he’d thought he’d lost returns, but fears and regrets still plague him. Will Jake ever be able to love Lyndie like she deserves, or is his heart too shattered to mend?

~*~
Review of Becky Wade's book, A Love Like Ours:

Fans of Wade’s debut novel, My Stubborn Heart, will find many similarities in A Love Like Ours, in which a vivacious, eternally-optimistic heroine meets a wounded, withdrawn hero, and proves to be the one person who can coax him back to life (and, since this is Christian fiction, back to God). But Lyndie and Jake are their own unique characters, and had such amazing depths from the very first page that I fell instantly in love with them. By the end of the prologue, I felt like I was reading about my two best friends.

The characters are definitely the heart and soul of this book, and there were so many wonderful personalities, both old and new, that I could spend this entire review just talking about them! Jake is a veteran suffering from PTSD, and I love that Wade doesn’t just slap a band-aid on that, or try to cover it up with some “all you need is Jesus” cliché. Instead, she keeps her characters firmly grounded in the real world, and while she does set Jake on the right road eventually, nothing is tied up with a neat little bow. The reality of Jake’s condition was as refreshing as it was heartbreaking, and definitely made him a hero to love.”

Read the full review written by Amy Drown, senior editor of The Christian Manisfesto, by following this link - http://thechristianmanifesto.com/fiction/a-love-like-ours/

Excerpt from Becky's new book, A Love Like Ours:

Jake turned up the collar of his brown corduroy hunting jacket, then rested his forearms on the top rail of the wooden fence that enclosed the thirty-acre pasture. His careful attention catalogued numerous things about the colt within, only a handful of them visual. Call it horse sense. Or instinct. Jake understood things about these animals that most people didn’t.

A few days ago he’d decided to back off training this particular colt, Desert Willow, and give him more time to recover fully from his arthroscopic knee surgery. Willow liked to complain about his sore knee, which meant Jake needed to freshen him longer before Willow would be ready to resume training. Five more days maybe—

Jake heard the crunch of a twig breaking and flinched at the unexpected noise, then cursed himself for flinching. He could already tell that the sound had been made by nothing but footsteps.

Turning, he squinted beneath the brim of his black Stetson and tried to make out who was coming toward him. A small woman with long, wavy blond hair. She wasn’t on the barn staff; that he knew. He angled toward her more fully.

And then, very slowly, recognition began to slide over him. The hair on his arms rose.

It couldn’t be her. Not after all this time. And yet the rational part of his brain understood that it could be. He knew she’d moved back to Holley. His mom had been nagging him to see her ever since, but he’d wanted no part of that, no part of her.

Yet here she was.

He went to stone, inside and out. Only his heart kept moving, knocking inside his chest, hard and sure. He didn’t want her to look at him.

He was ugly. And she was beautiful.

He’d already lived the life and died the death of the boy she’d known. She wouldn’t recognize him now, same as he no longer recognized himself.

She wore jeans tucked into black riding boots. A white shirt under a pale green sweater that hung open down to her hips. Big hoop earrings. Her scarf, which had a lot of green, pink, white, and gray on it, didn’t have ends. It just rested in a loop around her neck.

She came to a stop a few feet away and stuck her hands into the back pockets of her jeans.

He couldn’t speak, and she had the grace not to say anything trite. She only took him in, her head tilted slightly, a half smile on her face, softness in her gaze.

He hadn’t felt any emotion forcefully since his accident. Yet the sight of her caused bitterness to blaze through him, true and clean. You left me behind, he wanted to accuse. You. Left. Me.

It surprised him, the anger turning in his gut like a blade. She’d been a kid back then. Her father had gotten a better job in California, and so they’d moved. It hadn’t been Lyndie’s fault. But that’s not what he was feeling, standing here all these years later. He was feeling a betrayal so strong it nearly took his breath.

“Jake,” she said at last, her smile growing.

He dipped his chin. “Lyndie.”

Becky's book excerpt really draws you in, doesn't it?

Well, did you know you can WIN a FREE copy of Becky's book and more fun items in a complete giveaway package only today (May 10, 2015) by visiting Amy Drown's website? Here's the link - http://www.thechristianmanifesto.com/contest/a-love-like-ours 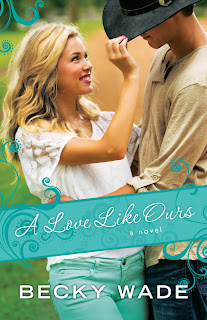 Becky's a California native who attended Baylor University, met and married a Texan, and settled in Dallas. She published historical romances for the general market before putting her career on hold for several years to care for her three children. When God called her back to writing, Becky knew He meant for her to turn her attention to Christian fiction.

Becky loves writing funny, modern, and inspirational contemporary romance! She's the Carol Award and Inspirational Reader's Choice Award winning author of My Stubborn Heart, Undeniably Yours, Meant to Be Mine, and A Love Like Ours.